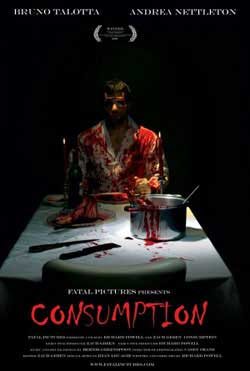 After weeks of online communication Claudia and George are ready to meet face to face. What at first appears to be a simple date quickly turns sinister and shockingly graphic. Tonight Georges impeccable taste in women will pay off and Claudia will learn that the fastest way to a mans heart is through his stomach.

Professor/Dr. George and Claudia are finally ready to meet face to face. He practices his welcome speech nervously over and over in front of the mirror before starting the preparations for her arrival. When she finally shows up, light conversation over the preparing of the meal and the obligatory “getting to know you better” talks occur during the meal where as time goes on we get to learn more about George’s eating habits and Claudia’s self-sacrificing nature. But in this horror short, we soon learn that this is also not your typical first date, and for once I can’t use any of my typical sarcasm or puns without giving anything away. I know, I know…dammit. I’ll do better next time, promise.

If you, my two loyal readers out there (thanks, Mom – don’t think I haven’t noticed!) know me at all, then you know how much I f*cking hate spoilers. I don’t like reading them in movie reviews, I really f*cking hate them in movie trailers nowadays where they show you major twists and almost every key point of the movie in under sixty seconds, and I refuse to write my reviews that way. I’ve always felt that when someone wants to watch a movie, there’s nothing wrong with knowing a synopsis to decide whether you want to see it or not. But to know every single plot point going in, to me anyways and no offense to anyone else out there, takes away the magic of watching something new for the first time. I’m sure this whole OCD with spoilers harkens back to my childhood and teen years in the 70s and 80s, long before the internet and television told you almost everything ahead of time, to where you could go to a movie on opening night and, love the movie or hate it, watch everything unfold in front of you for the very first time knowing virtually nothing about it ahead of time.

So for me, tis an even harder endeavor to write that way about a short film. In the case of this one, CONSUMPTION, it is only 30 minutes long, so….yeah. I will say this though – when you’re watching it, get past the halfway point and you can thank me later. The suspicions I had about what turn this flick would take were completely wrong, and after the twist sinks in and the blood starts flowing, then as you watch the rest of the movie unfold in front of you, everything that came before it in the setup part will make perfect sense. The gore FX for this little flick are most impressive given the looks of the budget, and bloodhounds should be most pleased.

Bruno Talotta is actually NOT an awkward and nervous actor like you find in so many low budget quickies, as I found after the movie progressed – he is actually very talented, as he had me fooled, just acting the way his character would in that given situation. Andrea Nettleton – another knockout gorgeous woman who can act, God love ‘em all – and she handled her very surprising character arc most impressively.

Writer/Director Powell – the only thing I could dig up on this guy is that he’s got another short coming to us soon called WORM, and after seeing what he’s got to offer here, I’m looking very much forward to checking that out as well.

LAST WORDS:
This is a hard-hitting little short film that takes the serial killer subgenre in a different direction than I’ve seen in a very long time, and I’m more than impressed with the result. You think you know exactly what’s going on, and while you’re watching the right hand intently, the left hand sneaks up and chops you in the throat. There’s also an underlying message about the lengths science will go to just to satisfy curiosity, but I’ll leave it at that and let you figure it out for yourselves. I’m not sure how one can get one’s bloody little hands on this Award-winning short, but if you take my recommendation and choose to seek it out, you won’t be disappointed.