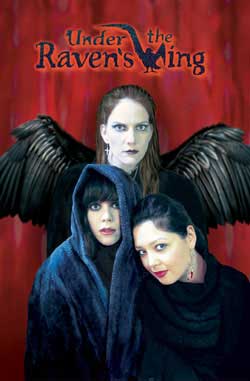 A young filmmaker documents the murder confessions of three young women who seduce him into their strange world of spiritual “dimensions” and “transcendence.” The ringleader, Raven, holds everyone in her psychological grip, until her secret is exposed and a power struggle ensues.

“Transcendence is a gift”

Often the signs of a low budget film are poor audio, half-baked script, bad acting and bad visuals. Even a well reviewed DVD can end up saying more about the movie reviewers’ wants and hopes than how good a movie really is. Happily Under the Raven’s Wingis as good as its press. The script is solid, the camera work fits the story, and the direction is strong as well. There are no sound issues. The acting is very strong for a low budget film, and serves the story well.

A wannabe filmmaker documents the details that surround a murder committed by three disturbed young women. The leader of the women Raven wants the film to show to the outside world that they didn’t commit murder but gave a beautiful gift of sending a soul to the other worlds. The filmmaker is unable to keep himself from becoming part of the story with his comments and interactions with the women, getting farther and farther into their world. Raven and the filmmaker get into a power struggle over the film and the women, which leave the filmmaker fearing for his life. Does the filmmaker survive? What happens to Raven and her followers? Is there any truth to Raven’s stories and do we really live on past our time here?

Susan Adriensen has created a documentary that slowly brings you into the world of Raven, Jessie and Angel and shows the filmmaker’s growing fascination and horror with them. The style of shooting allows any camera issues to be strengths and not weakness. The camera becomes the filmmaker and has a strong presence as the fourth main character. Some of the dialogue has an ad-libbed feel which again works with the story and not against it. All the acting is good, and Raven (Kimberly Amato) is scary enough to come through the screen and get you. You are never safe when she turns her angry eyes on you, but the movie does let you know how she become the person she is today. 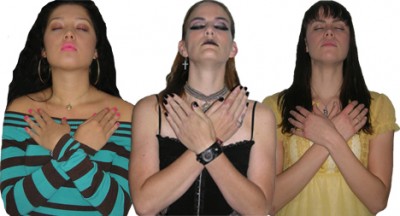 * The acting is wonderful. The whole cast knows their roles and plays them well. The director clearly worked well with her actors and got strong performances from them all.
* The foursome which in theory should be a male fantasy but is handed carefully and is more about power than sex.
* The filmmaker being a character in the film. Normally the filmmaker is really a character in all she/he shoots but this film admits it.
*The ending, can’t really reveal it to you but it works and is well thought out.

**The sister in the cellar worked better as a monologue and not so much as something we needed to see.
*The final reenactment was a little confusing.

Under the Raven’s Wingis a great movie to spend an evening with. The filmmakers worked very hard to make the most of a small budget and give us a movie that will leave you thinking about it days after you watch it. I give it 5 out of 5. It’s too early to pop some popco rn, and give this one a chance, as it hasn’t been released, but it will and when it is walk don’t run to the video store.

Tags Under the Raven's Wing