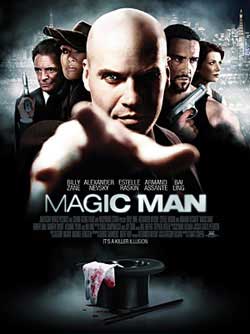 In order to see magic idol Krell Darius perform his world-famous magic act, a beautiful aspiring young-magician, Tatiana, travels from New York to Las Vegas with her closest friends, BFFs, Elena and Vera. As the layers of illusion unfold, so too do the dark windows into Tatiana’s past

When one wants to see the best magicians in the world where do they go? Las Vegas of course. So it’s fitting that our 3 anxious travelers have set out on a getaway to enjoy the sites and see a bit of magic along the way. Our 3 main characters Tatiana (Estelle Raskin), Vera (Sarah Jayne Jensen) and Elena (Christina Vidal) are in for quite a vacation. ‘

Tatiana an amateur magician herself comes with an agenda and a expectation fulfilled to see one he greatest magicians in the world. Darious played by the multifaceted Billy Zane is everything a Vegas magician should be. Not only a key performer, fantastic illusionist but enigmatic, peculiar and fascinating. Hats off to Zane for really capturing the “magician voice” in his stage performances. I always enjoy his performances and this film is no exception. Bai Ling plays the magicians assistant Samantha who plays off the role like an ace.

Meanwhile a cross story evolves around the 2 detectives Orloff (Alexander Nevsky) and Simpson (Robert Davi) who have served the Vegas police force the better part of the last 10 years. While getting the bad guys is a common everyday, they have grown weary from it all and question their role in the scheme of things quite often.
Worlds collide when Elena after volunteering for a live Darious magic act shows up dead the next morning. Not only dead, but dismembered into 2 separated parts.

Tatiana who suffers from an early tragedy that left her mother dead per a botched magician’s act, has been informed that someone may know something about her mother’s death. Rudolph Treadwell (Andrew Divoff), a taunt (remember that word for the day!) mysterious fellow shows up from the shadows with cryptic messages about Darious.

Treadwell had a former flourishing magician career until one unfortunate magic act ended in tragedy. He had sent an unsigned message to Tatiana requesting she come to Vegas to learn about her mother’s death. Rudolph’s character really never evolves into much of anything except being mysterious and a small part of the plot line.

The story does its best to misdirect here and there but nothing comes really as a surprise. A few friends get killed and the whole plot begins to get a bit pointless. While I wont take away form the actors performances, it’s the story that is inheritantly weak. Director Roscoe Lever started with a purpose here but got bored as the film reached its 3rd act. By the looks of things budget probably ran out as after the body dismemberment, it was clear that the show must not go on.

Magic Man although it “somewhat” attempts to be a “Wizard of Gore” kind of film really never gets much farther than a murder mystery. On original assumption, I was expecting something different which kind of fell flat into a film you may see late night on the USA channel or an old episode of Miami Vice maybe. I’m not really giving much away to say this film has no real ending. If the meaning was clear to others, then please help me undertand how it ended.

For giving us lousy ending I really have to give this one a total “waste of time” stamp and leave it clearly at that. Perhaps when the offical DVD comes out there will be a director’s commentary that explains this a bit, but for most viewers I’m sure you will walk away with “that was crap” impression. On this note I’m gonna say pass!!