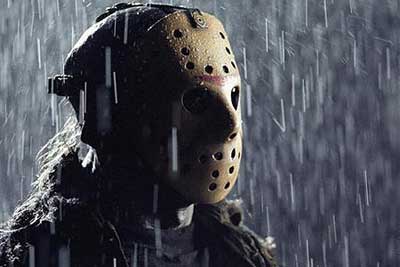 The relationship of mother and son is a very touching thing. Don’t get too close to your mother, however, the kids might start talking and calling you names. Sons that just so happen to be overprotected by their mothers are considered weak and vulnerable, which is reason that they will be picked on .

In a few days from now a remake of an original horror film will be released. It will be opening in theatres on Friday, February. 13th. If you know the date, you probably are aware of the superstition. Friday the 13th is commonly associated with bad luck, this phobia is known as paraskavedekatriaphobia. (Try processing that in your spell-check) This remake will actually be a re-imagining of the first few films in the series, as Jason did not appear in Friday the 13th part 1 as the killer. The relevance of the date Friday the 13th relates to the fact that Jason was born on this date, however, it was in the month Of June in 1946. His place of birth is identified as Wessex County, Massachusetts.

Jason was a mentally ill child who did not go to school, nor did he have any social contact with anyone outside of his mother. Jason had an condition called hydrocephalus, also known as “water on the brain.” This causes increased cerebrospinal fluid that can make the head enlarge, and can cause mental disabilities. One year his mother brought him to Camp Crystal Lake, where she worked as the cook. Jason was ridiculed by the children at the camp for his disfigured face and disturbing appearance. Although it was not his fault, children can be harsh judges of anything outside normality and there will always be bullies trying to bring the weak links down. He drowned when trying to escape from the children. Jason slipped off the pier and “drowned”, and his body was never recovered. This left his mother in an insane state, refusing to let anyone reopen the camp after the incident. She would go so far as to set the place ablaze when they tried to reopen it after his drowning. Every time new people began to try and start anew, bodies would start to pile up. Jason was not the killer of these people, his mother was. The startling number of deaths at Camp Crystal Lake earned it a new name; “Camp Blood”.

If you have a son or daughter and are wondering how to keep them abstinent, look no further. Friday the 13th is the perfect birth control, and the ultimate mood killer. Whenever naive teens begin exploring their sexual desires, Jason is never far away, and will surprise and kill them. When Jason drowned, the camp counselors were off having sex. Forget the outdated birds and the bees talk, Jason will teach your kids a thing or two.

Jason’s mother was finally slain by Alice Hardy in 1979, after about 7 people were killed who were trying to reopen the camp once more. A few months later, Jason is somehow alive and seeks vengeance on those who killed his dear old mum. The distraught son even builds a shrine for his mother, a work of art that includes her severed head and some of his victims. Pamela Vorhees body eventually finds its way to Eternal Peace Cemetery.
The transformation of Jason throughout the series filmography is pretty remarkably flawed. He goes from dead boy to grown man , then somehow becomes very athletic and muscular and superhuman. All of this is not considering the fact that Hydrocephalus can cause extreme pressure in the head and unprovoked convulsions. The deformed Jason that hides under the mask is the result of gore and makeup effects master Tom Savini.

Ever silent, always living inside his head, Jason could be considered closely related to Michael Myers. Myers never speaks after his transformation into a complete psychotic state at the mental hospital. Jason silently stalks, his victims, his bloodlust never seeming to be quenched. Another close relative of Jason could be Norman Bates of Psycho. Norman Bates was a puppet for his mother, controlled by her even when she wasn’t living. He would kill for her, and he would die for her. Was it schizophrenia, or did mother really have such a leash on him even in the afterlife? He is much different than his legendary horror film franchise rival, Freddy. Freddy has personality and tends to add a comedic twist to his movies.

When Jason kills he is not limited to strictly one weapon. He has been known to wield many blades including axes, knives and machetes. He is most commonly associated with the machete, however.Even with a recent streak of incredibly bad new additions in the series, Jason still remains a fan favorite, and undoubtedly is one of the most popular killers, even 28 years after his horror debut. Forever immortal in the film franchise, and in fans hearts, it’s unlikely Jason is going away soon. Especially with a new film debuting this Friday, that could prove to be a much-needed shot of adrenaline into the veins of a series almost three decades old.