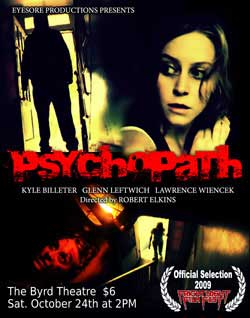 Sarah misses a desperate call from her stranded sister sets off with friends to find her in the backwoods town of Raven’s Neck, home to a brutal escaped mental patient.

The opening credits for Robert Elkins’ PSYCHOPATH set us up well for a horror ride with a jarring surprise of a technique, something a little new and different…and necessary to the slasher genre. The key to good horror is to keep the viewer on his or her toes, and to get something like that in the first minute is a real treat. It’s sudden, interesting, and immediately had me thinking that the film held some promise.

From that point, we’re given a stock chase, in medias res, and it’s a lock that this scene is going to end badly. A good establishing scene with all the right sound cues, some healthy gore and solid camera work round out the meat and trimmings, and the promise of PSYCHOPATH continues to…well…promise.

The premise is simple enough: among the victims of our masked, hulking behemoth is a girl with a twin sister. The twin, being a twin, gets a funny feeling about not hearing from her sis, and so she rallies the troops to go get to the bottom of the mystery. In attempting to solve The Mystery of the Missing Twin, murder and a giant guy in a black-eyed mask get in the way and provide pretty much all of the plot development that’s going to occur for the duration of the film’s 78 minutes.

It’s unfortunate that, from that realm of limitless promise, we end up in the land of the same-old same-old. The cinematography is definitely competent, the sound is even and just fine and none of the actors are in any way offensive to the senses of a horror fan, but you’ve absolutely seen this movie. No new ground is broken, and that’s the biggest flaw that PSYCHOPATH has.

We’re treated to the hulking, brutal killer, the crazy old man who facilitates the killing, and plenty of young nubiles just waiting to get slashed all over the place. To Elkins’ credit, our killer, perhaps the titular PSYCHOPATH, always seems to show up at the most random moments, which does add a decent amount of suspense. It’s a gimmick, though, and it definitely does wear thin after he pops up behind some pissing 20-something for the 5th time.

As mentioned before, however, there is quite a bright spot in the acting. The fella who played Eddie’s “friend” was largely a waste of footage, but everyone else was very competent, especially the female leads, who weren’t played to be simpleton wimps. Unfortunately for them, their characters (and all of the characters in general) didn’t have very far to go after they made their on-screen entrances. It would have been really nice to see what an extra 30 minutes could’ve done for the relationships between the characters, thus making us all care a lot more about these pretty faces when they were smashed to bits by Eddie and his weapon of choice.

Beyond that, this is the archetypal slasher flick, and while the gore abounds, the story doesn’t. For a movie like this, story is absolutely necessary, and when it’s not there, it really shows. In comparison to something like HENRY: PORTRAIT OF A SERIAL KILLER, it’s absolutely amateur…which isn’t to say that something good couldn’t come of Elkins and Co. in the future, but this outing simply feels uninspired. It’s as if the gang here saw HATCHET, liked it, said that they could knock the d*ck right off of that flick, and set out to do it.

And sadly, it just didn’t happen. If slashers are the alley you like to frequent, this will work in a jam. It’ll cure the itch and give the slasher fan the necessary fix to hold him or her over until the next best blood ‘n guts feature comes down the pike.

Overall, it’s a hard film to rate. The technical aspects of the movie are all well in place, showing talent across the board, ranging from the acting work to Victor Nash’s music, all the way to Elkins’ direction. And it’s not an outright bad movie; the gore and a sense of surprise and dread do a lot to push the movie along in a positive direction. But in the end, it’s hard to find the love in this movie, hard to find the passion and impossible to find something that creates a new mold and then breaks it, creating an original piece of filmic art.

PSYCHOPATH ends up being a great exercise in making a slasher film by the numbers, but doesn’t step outside of itself at all, which is something that’s absolutely necessary in the post-Scream era of horror cinema. Essentially, it’s not bad, but it’s not something I ever need to see again. And that’s amongst the worst places a horror flick can settle. DEAD END is endlessly rewatchable, and Nick Cage’s THE WICKER MAN can be put on anytime someone needs a good laugh, but PSYCHOPATH simply stands there, not even interested in garnering attention. It’s unfortunate, because a couple of tweaks in the plot could absolutely change that. Take a film like MALEVOLENCE as a perfect example of just how true that is.

Eddie sure can creep, though, and that takes the movie up a notch. Thank God, Eddie can creep! He should get a job serving out subpoenas because no one would ever see him coming. For PSYCHOPATH, though, the character couldn’t rise above the stock in which it was created. Thankfully, I think there’s a future for Robert Elkins; unfortunately, the future is not now.

PSYCHOPATH: if you’ve seen THE TEXAS CHAINSAW MASSACRE or WRONG TURN and just couldn’t get enough of it, you’ll enjoy this flick. If not, give it a miss. Nothing new to see here… 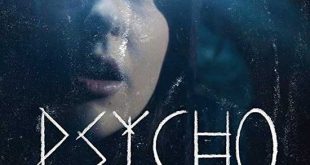