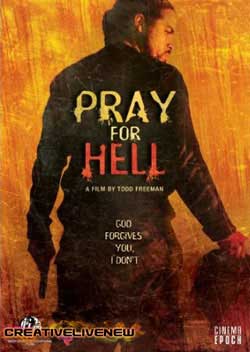 (aka “Come Hell or Highwater”)

After his father and brother are brutally murdered, cop Tonka (Alan Wone) stops at nothing to bring justice — very deadly justice — to the perpetrators of the crime. But as he sinks deeper into his quest for vengeance, Tonka loses hold of his own humanity. Portland, Ore.,-based filmmaker Todd E. Freeman keeps the blood flowing fast and furiously in this low-budget, violent revenge thriller, also starring Robert Blanche as Griff.

QUICK FIX:
Tonka is a cop out for blood and vengeance following the brutal murders of his father and brother. In true Grindhouse fashion, his badge don’t mean sh*t when it comes to breaking the rules and kicking anyone’s ass (or just plain shooting their ass) to find the bastards that did it and make them pay.

As the hunt goes on, he comes to learn – also in true Grindhouse fashion – that those around him who are still breathing that either try to help him or that he cares about also meet vicious ends the closer he gets to the truth as double-crosses and mindf*ck imagery haunt him all along the way until the final, ultimate showdown.

RAMBLINGS:
Well, kiddies, this was a nice change of pace for me. Being that I’m a horror buff and a reviewer of horror movies for a horror site, and 99.9% of the stuff I get sent to review is, in fact, horror, and I never Google the titles before watching them if I don’t recognize the name on the screener, getting something in the mail from The Boss along the lines of PRAY FOR HELL can be a great surprise.

Sure, I spent my elementary school years in the 70s, and thanks to older cousins was introduced to many a great horror (and all genres, really) movies back then in either theaters or drive-ins, but living in small town Kansas there was no opportunity for me to check out and live through a true Grindhouse experience. I had to settle for watching those types of movies heavily edited on late-night TV, or later on VHS, and now of course on DVD. Granted, I’ll take that over nothing at all, so it’s almost always cool.

Many filmmakers have tried and failed to capture that same spirit in recent years – the most notable epic fail being the double feature GRINDHOUSE from the Rodriguez/Tarantino team. Sure, I enjoyed them for what they were, but you could also tell really easily that they were big budgeted studio flicks with the gloss digitally taken off so they would have that authentic “look”.

Problem was, audiences my age don’t want that sh*t – we (or I, at least) want the dirty, gritty, brutal, we’ve-got-no-money-but-we’re-doing-it-anyway-so-f*ck-the-world look and feel of the old days because, if you’re going to make one of these flicks it’s gotta be done on an indie level with heart. The only one that I’ve seen in recent years that has that fire and spirit down like it’s second nature has been Chris Thompson with his epic Grindhouse zombie flick CARNIVAL OF THE DAMNED, and I’m still eagerly and impatiently awaiting his next film.

But here, suddenly, we have a new contender in the ring. I’m not familiar with Mr. Freeman’s work prior to this, but from watching PRAY FOR HELL, it’s obvious that he has a genuine love for the days of old and took great care on a small budget to give us that larger than life feel of movie-going experiences from back then. Everything from the cars to the clothes to the looks and attitudes of all the characters – they all fit into that stereotype perfectly.

LAST WORDS:
I can honestly say right now, that this flick will probably not be for everyone. BUT, if you like hard-boiled revenge flicks in the spirit and style of 70s Grindhouse where the good guy is a hardassed antihero with an agenda; where the women love their men loyally and without question, going way past the scope of what is possible for the passing of a relationship these days; where the bad guys are way beyond evil…I’m talking the kind of bad guys who would shoot a cute adorable puppy just to make sure their gun sights are adjusted properly; where the camera languishes over certain scenes for minutes on end where normally you think the scene should have ended after just a few seconds, but damned if it doesn’t somehow work in the context it’s presented in anyway; then my friends, PRAY FOR HELL is what you’ve been praying for.

It’s available at fine online retailers everywhere from what I can see, so check this bad mutha (shut yo mouth!!) out and turn your living room into your own private Grindhouse!