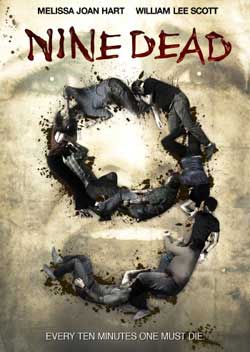 Nine strangers face the mind-bender of a lifetime when a hooded madman locks them in a basement and announces that he will slay one of them every 10 minutes until they uncover the mysterious connection they all share. But starting without a single clue, can any of them solve the puzzle in less than 90 minutes? This horror-suspense film from director Chris Shadley stars Melissa Joan Hart, John Terry and Lucille Soong

When nine strangers are mysteriously kidnapped and locked into a room, emotions run wild when a masked killer threatens their life by repeatedly forcing them to answer the question, “Why are you here?” Chris Shadley’s Nine Dead is a bloody revenge flick, which keeps the viewer on the edge of their seat wondering the connections between the nine victims, and who will be the next to be eliminated from the nine.

Nine Dead begins with the hooded, masked villain(John Terry) picking up all nine victims, and he places them in a secluded room. He handcuffs each one to a metal pole, and puts a hood over their head. When he removes the hood from each victim, the bewildered captives look around to see if they recognize anyone. The killer turns to his captives and explains the rules of the game, that they must all figure out why they are there and they will not be killed. Unfortunately, they only have ten minutes to solve the riddle, or one of the nine victims would be shot. The killer rolls out some chalk so that the victims can take notes, and leaves the rooms.

The nine victims immediately start to question the motives of the killer, and wonder why they are all there. Christian (John Cates) is one of the first ones to speak up about his profession as a bartender and an actor. Next to him, Jackson(William Lee Scott), is a former lover to the attorney Kelley(Melissa Joan Hart), and is still pain-stricken from his wife leaving him. Next to Kelley is Leon(Edrick Browne), who is a robber that has an affinity for guns.

Next to him, Sully(Chip Bent) is a strip club owner from Vegas, with a less than sunny personality. On the next pole is Coogan(Lawrence Turner, who has a spiteful personality and is hated amongst the victims for being a committed sex offender. The last three poles have Father Francis(Marc Macauley), health insurance agent Eddie Vigoda (James C. Victor), and Chinese speaking Nhung Chan(Lucille Soong). They all discuss their jobs, with distrust that the killer will actually kill the victims.

When the killer re-enters the room, he demands them again to answer his question. When they are all still puzzled, he points his gun at Christian and immediately shoots him. All the captives are instantly affected by seeing one of their own being eliminated. The killer drags the body out of the room, and with only eight captives left, they must again solve the riddle of why they are there. With the solving process, the victims get into their deepest, darkest secrets and eventually solve the puzzle as possible links get eliminated through the process. The anticipation of wanting to know why these people were in the room really drove the movie, which had not much action besides a person being shot every ten minutes.

There was a disturbing part in which Leon tries to escape, and makes Sully break his hand by kicking it until it was broken enough for him to wiggle out of the handcuffs. When the victims were systematically shot, there was no exact timeline that coincides with the answer to the mystery of why the nine victims are there. However, they do manage to solve the mystery, leaving the ending open ended in an unpleasant way. Also, the camera turns away when the victims are eliminated, but there is a good share of blood splatter and trails when each victim is dragged out of the room.

Shadley’s Nine Dead almost feels like a tribute to the Saw movie series, as a masked villain kidnaps people and demands to figure out the meaning in a life that is not as clean as they think. With twists and turns, the lives of the nine individuals are all interconnected in a strange way that helps a lucky few in the end survive the villain’s deadly game.