Mwhahaha! It’s finally upon us. . the time of year when even the most closeted of horror fans can come out to play. A time when the suburban streets are blanketed with horrific imagery, and the ghouls and demons of this world come out to party hard. Oh yes, it is the time for Halloween and to commemorate this my favorite time of year, I have lined up this Special Edition of Horror Talk to bring out the evil of the season in your souls. I have the latest and greatest for you as usual. I also have little tricks and treats to feast your dark eyes upon including my favorite films to watch during the sinister Sam Hain season among other things. Alright, so place a light in your pumpkin, hang your dead body from its pole, it’s Halloween! So, let’s get down to some horror business, shall we?

First up is Sam Hain cinema and there are definitely some great new offerings, as well as classics that have been given the ultimate treatment on Blu-Ray!

First up is a macabre mindf*ck from Tokyo Gore Police director, Yoshihiro Nishimara. This horror acid trip is called Vampire Girl Vs. Frankenstein Girl, and you just have to see this overseas gem for yourself to believe it! The film is the terrifying story of two of horror’s classic monsters re imagined as super sexy, super violent school girls. That’s right, now Frankenstein and Dracula have not only decided to invade your nightmares, but your wettest of dreams as well! The gore in this is so over the top, contains sex crazed school nurses, psychedelic blood-filled chocolates, sumo wrestlers from hell, and one of the greatest fight sequences you will ever see in cinema in a long time! Witness the blood soaked clash between two sexy titans when you purchase the film from Funimation Productions available right now! 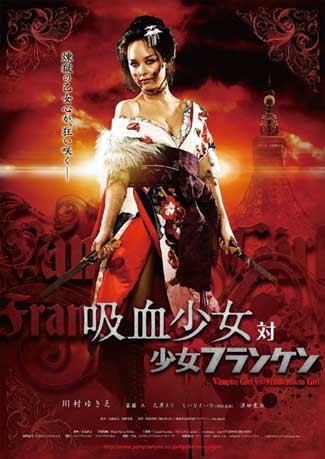 Next on the list is a true horror classic, and in the eyes of most horror fans is considered to be the most frightening film ever made! Of course, I’m talking about The Exorcist. This is the 1973 classic directed by William Friedkin based on William Peter Blatty’s novel about an innocent girl possessed by true evil himself, Satanus. With excellent performances by the entire cast including Max Von Sydow, Jason Miller, Ellen Burstyn, and of course the untouchable Linda Blair, this film sparked major controversy as well as fear in Catholics and bible thumpers the world over. The Exorcist has now been resurrected in this Blu-Ray premiere two disc Special Edition set. This set includes the 1973 film as well as the revamped 2000 update. Become possessed with delight when you add this piece of evil to your DVD collection from Warner Home Video now! 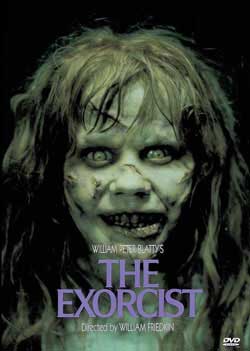 Next on the classic revamp list is Alfred Hitchcock’s Psycho. I have personally had the thought that John Carpenter’s vision of Michael Myers was and is the ultimate slasher, but truth be told there would be no such Shape if it were not for the true father of maniac killers, Norman Bates. And more importantly, there would be no Jamie Lee Curtis without the mother of scream queens, Janet Leigh. . literally. Available for the first time ever in its original aspect ratio, this classic gets the treatment of a masterpiece it truly deserves with extras including newsreel footage surrounding the making and release of the film, a production still archive, the special trailer in which Hitchcock leads viewers through the Bate’s home, posters and advertising material for the publicity of the film, and a ninety minute documentary on the making of the film. Whoa! Shelby Lynn you can rejoice now. . your favorite killer has come home for real! The rest of you ghouls can purchase The Legacy Edition of Psycho from Universal Studios now. . and stay out of the shower. 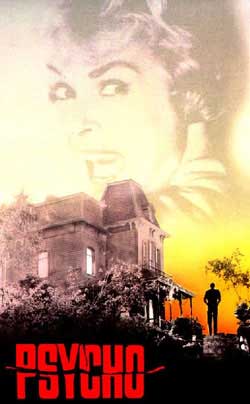 Alright, now we come to the first treat of the Halloween Edition before we move along the dark path. If anyone had ever read my column wondering to themselves, “what horror fare does Delamorte delight in during the season? “Well, your dark prayers have been answered. Here is my top ten list for my picks for the greatest films to view during the month of October!

First, number ten is Friday The 13th Part 7: The New Blood. This film introduced us to the menacing Kane Hodder, had one of the greatest heroines in the series since Adrienne King and Amy Steele, and incredible makeup effects by John Carl Buechler. Besides the first installment, this is the quintessential Friday The 13th film. 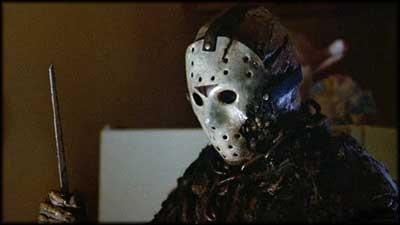 Number nine received alot of negative press by many critics, as well as close minded people that do not understand the genre. This film in my eyes however already stands out as a horror classic. This film had two beautiful, believably frightened girls trapped by a sinister doctor, an unimaginable experiment come to life, and a huge but very bleak conclusion. The Human Centipede is definitely on the list. 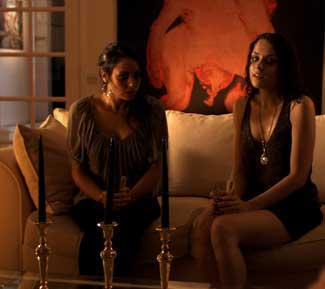 Number eight is The Rise Of Leslie Vernon. This had a comedic take on the horror slasher as one lunatic goes through his methods to become the next famed slasher in a paint by numbers sort of way. This had the survivor girl theory, horrifying moments, and one of the greatest, most original new characters ever conceived. See it for yourself, hope you like what you see! ! 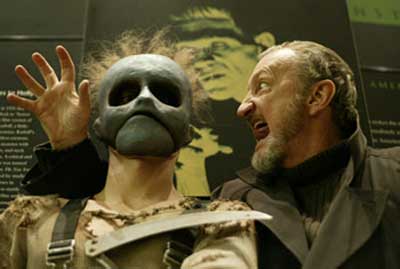 Number seven is Don Coscarelli’s Phantasm. This film introduced us to Angus Scrimm as the menacing Tall Man, had a killer orb that drained the blood from its victim’s heads, and a portal to another planet in a mortuary. A true classic! 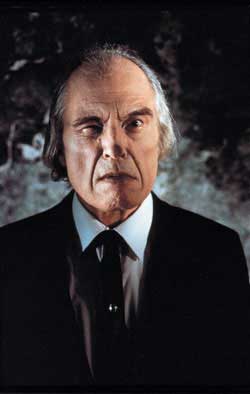 Number six is Dario Argento’s horror fairytale, Suspiria. This is the story of an American ballet dancer who is enrolled in a dark and sinister European school. This film had rooms filled with barb wire, one of the greatest deaths ever captured on film, an incredible, haunting soundtrack by Goblin, and some of the most beautiful Technicolor you will ever see in the last moments of your life! 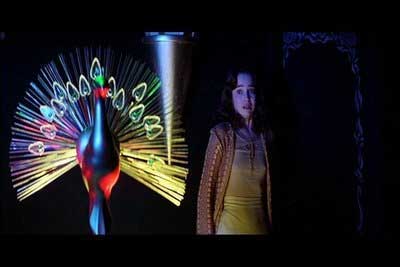 Number five is Clive Barker’s Hellraiser. This film to me was always ahead of its time, and still stands as one of the most frightening concepts in horror ever! Filled with adultery, torture, demons from a portal in hell, and the introduction of Doug Bradley as the timeless Pinhead, this film will always stand out as one of my true favorites. 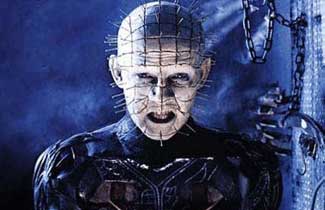 Number four is the original Friday The 13th. Sean Cunningham started everything Jason with a gruesome tale with a simple premise, teenage campers due to a mother’s long growing vengeance due to the accidental death of her son. It also stands out because it introduced us to the lovely Adrienne King who was incidentally my first interview ever for Horror Talk! 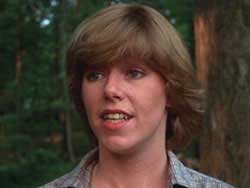 Number three is Wes Craven’s original Nightmare On Elm Street. Before Freddy was a pop culture icon, the concept for this beginner was absolutely horrifying! A child killer/rapist burned alive only to exact his revenge in the dreams of the children whose parents murdered him. . whoa! There’s so many reasons why I love this, but of course the standout for me would be our first true introduction to Sir Robert Englund! 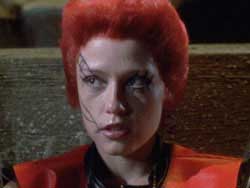 Number two is Dan O’Bannon’s Return Of The Living Dead. If you are a true horror punk like myself then you have an appreciation for this. . or at least you should! Filled with special effects that still stand out, a comedic edge mixed with horror, and the rockin’ Linnea Quigley, this new take on the zombie mythos always had a place in my black heart for sure.

And my number one is not a coincidence, it’s just a fact! The greatest Halloween film, and incidentally my favorite horror film ever is John Carpenter’s 1978 super classic, Halloween! Alright, there’s so much to say but I will abridge my love for you all. It was made on absolutely no budget and scared the sh*t out of millions, it introduced us to one of the greatest director and producer teams with John Carpenter and Debrah Hill. It gave birth to the ultimate slasher, in my opinion, Michael Myers. And the most important scream queen in the horror pantheon, also in my opinion, Jamie Lee Curtis, who incidentally is the daughter of the mother of all scream queens, Janet Leigh! Need I say more? I absolutely adore this movie. . period! 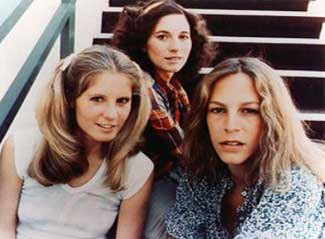