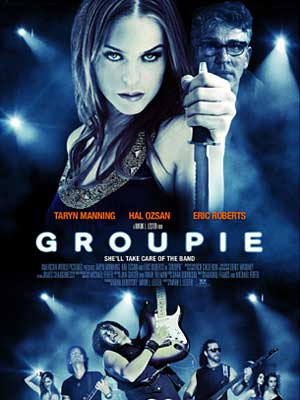 When a mysterious groupie joins legendary cursed band, “The Dark Knights”, a series of unexplained murders derails their comeback tour.

When I think of Mark L. Lester, I expect a film to revel in excess. Maybe excessive violence, excessive, nudity, or excessively bad dialogue and one-liners. I haven’t followed his career since 1991 when he directed the ridiculous action classic “Showdown in Little Tokyo” with Dolph Lundgren and Brandon Lee. This man is also responsible for “Commando”, “Firestarter”, and “Class of 1984”. There are many more but these are ones played a part in my youth and were part of me growing into the film nerd I am today. They may not be great films, some of them just don’t hold up, some do, but Lester can deliver a truly fun experience. “Groupie” is his latest film, while it was enjoyable and fun, it lacks the intensity and excitement of his earlier efforts.

The film opens with the band, The Dark Knights, performing to a sold out crowd in a small nightclub. The crowd goes wild when the band’s singer, Travis (Hal Ozsan) lights his coat on fire and finishes off their signature song. Things take a turn for the worse when his coat catches the curtains on fire which spreads quickly throughout the club. The crowd is in a panic and a young boy is trampled to death. One year later, the band is back after taken a year off to recover from the incident, though a rumor has now spread that the band is cursed. During their comeback tour they allow a groupie, Riley (Taryn Manning), to join their bus. Something about her is different and everyone can tell. From the jealous girlfriend Nikki (Betsy Rue), or the suspicious manager Angus (Eric Roberts), she may not be what she seems and death is right around the corner. 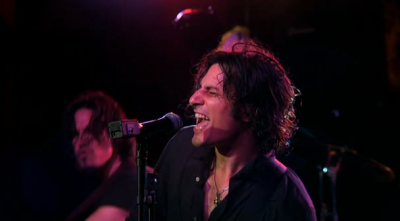 You know, this film has all the ingredients to be a cult classic and for a director who is known for exploiting the key elements in his films was rather restrained here and the final product is watchable though forgettable. Without giving away two much, this film could have been presented as a pretty straight forward thriller or gone nuts and thrown it all in your face. It should have gone nuts and at times it felt like it may have but Lester held the reigns firmly and kept things pretty mild. Taryn Manning did a fine job in the lead and Hal Ozsan is a familiar face with a strong future. Eric Roberts had plenty of screen time but he is at his most interesting when he goes all out, he was solid, but was hoping to see go all out here. A movie that should have been about sex, drugs, murder, and rock and roll, never spent enough time in that area.

The story was good, there were some interesting twists and the script was strong. The film looked good but there were some minor issues that I picked up right away and found incredibly annoying since a director who has spent close to three decades in the business should have caught the continuity error. Especially since it happens during the climax and involves a main character wearing a long sleave shirt that is imperative to the performance, only to have several obvious shots in the sequence where he is wearing a muscle shirt.

“Groupie” is just barely a step above a TV movie. It isn’t a complete waste of time. There are a few fun scenes, a bit of nudity, and almost no blood. If I were you, there is really no need to seek it out, you’re not missing much. If for some reason you’re bored on a slow night and “Groupie” explodes on your screen, it’s not so bad. I was just expecting something with a bit more oomph I guess, coming from the director of “Class of 1984”. With a little more grit and a bit more attitude, this film could have had an impact, instead it is just going to quickly wither away and be forgotten. 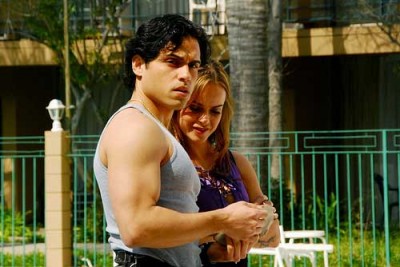 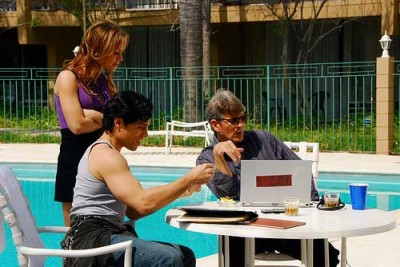