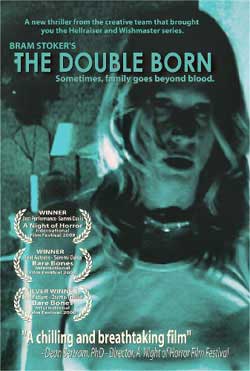 A woman is tortured by the sudden disappearance of her only child years before. Obsessed with having another baby, she is devastated and driven to emotional crisis when discovering her new husband is infertile. Gripped by despair, the woman begins to resign herself to the bitter likelihood of never having another child. Striking up a friendship with two discarded young laborers hired to re-paint her son’s now silent room, the three lost souls form a disturbing bond as the boys are led deeper into the woman’s tormented world. Her family’s suspicions of this unsettling new friendship sets off an irreversible series of events, leading to madness and murder as the horrors of the past collide with the sins of the present, ending in tragedy and terror.

Now I love bizarre little films, ones with twists and turns you don’t see coming. When they work, you have to tell everyone about them.When they don’t work, no one else has to suffer through them except for you. I hate to say it but “The Double Born” falls into the latter category. It really isn’t a horrible film, just not one that worked for me. In fact, the acting in the film is pretty solid but the construction of the story makes for an overly long viewing experience that took every ounce of will power to keep my eyelids from falling shut. And what’s even more unsettling is the fact that this film was directed by Tony Randel, who was responsible for the terrific “Hellbound: Hellraiser II”. I want to know, what the hell happened?

Sophie (Sammi Davis) is a distraught housewife, still unable to get over the fact she had lost her son. She and her husband keep trying to have another child but she soon finds out that he is infertile. Ephraim (Jon Lindstrom) her husband, has to leave town frequently for work and her sister Hallie (Jenny Paulin) is overly busy with school and her own life leaving Sophie alone and craving attention. Enter Harry (Jake Bern) and Tommy (Alex Weed), two friends with a dark secret of their own, who are hired to re-paint the boys room. A bizarre chain of events lead the three of them together, forming a bond and relationship the draws the attention of her husband and sister. When the inevitable final confrontation takes place, secrets are revealed and lives are changed forever.

I don’t have a problem with a seasoned filmmaker trying something different, working independent. This usually means freedom for the filmmaker but damn, I don’t know what the hell Tony Randel was thinking. I don’t know what look for the film he was going for but if it was cheap, dark, grainy, and amateurish then he nailed it. It was a real disappointment to see this and really hard to watch. The film was meant to be a character study, how these troubled characters use each other to for their own gain and how their relationship leads them into a dark place. The characters were underwritten, there were ideas of who they were, just never developed properly and the incoherence of the story doesn’t help it any.

What was good? The acting, for me, was the highlight. Sammi Davis is a pretty solid performer and since she was acting as well as producing, she obviously believed in her character enough to give it her all. Not to mention, as a middle-aged woman, she still doesn’t mind showing off her body. Alex Weed and Jake Bern did the best they could with their characters, there were moments when things worked and some when they didn’t. The majority of the blame for this is the scripts lack of focus and lack of well, anything.

It was rather dull and nothing much really happens. The last twenty minutes of the movie were good, it held my attention, but the first hour and twenty minutes were incredibly hard to sit through. I really don’t think that I can go on record and recommend this film. It isn’t garbage by any means, but it is a mess that never really works on any level. I get that filmmakers crave to be independent, to get their visions on screen, but this was a visions that was cloudy and half c**ked.

Maybe some more time was needed on the script. Flesh out the characters, make their plight interesting and pack it with a punch, something to knock the audience on its ass. Instead, we are pushed around a bit and bitch slapped leaving us wondering what the heck just happened. I hope this was just a misstep since there really was a lot of good talent involved in front of and behind the camera.