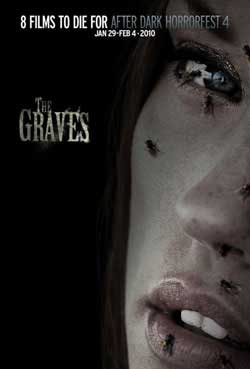 A pair of sisters who have very different personalities (Megan is tough and fearless while Abby is the easily frightened type who needs her sister to take care of her) take one last road trip together (to see the world’s biggest thermometer) before one of them heads off to New York to begin her career. They stop in a small town to grab a bite to eat and while they are there they end up going to check out Skull City, one of those cheesy roadside attractions. They soon learn that Skull City is not the safest place to be and before they know it they are involved in a battle for survival against not only a family local rednecks but a demonic force as well.

I went into “The Graves” with very high hopes. When I heard what it was about I thought that it sounded like it would be right up my alley. My other great passion in life other than horror is comic books (I have been a comic geek for as long as I can remember), so when I learned that Brian Pulido (of “Lady Death” and “Evil Ernie” fame) was writing, directing, and producing this movie I was beyond stoked. I was even more excited after hearing that genre legends Tony Todd and Bill Mosely were involved as well. Before I watched it I thought to myself that with such a promising plot and so many important and people involved that I was going to be in for one hell of a treat. I sat down to watch “The Graves” expecting to just be completely and totally amazed by it. Sadly, that just wasn’t the case and it turned out to be a major disappointment.

I think that the main problem with “The Graves” was the plot. What could’ve been a very fun, gore-filled throwback to the 80’s slasher flicks that I grew up on ended up being just another cookie cutter “violent rednecks who kill outsiders” movie that has been done over and over and over again in recent years. Seriously, if you have seen “House of 1,000 Corpses,” “Carver, (and God help you if you suffered through that one)” or any of the “Wrong Turn” movies then you’ve basically already seen “The Graves.” There is nothing new or original here (except for the silly demon angle that doesn’t quite work) and the end result is quite boring. Don’t get me wrong, I wasn’t expecting anything ground-breaking in terms of story, but I at least thought that it was going to be something just a little bit different than the same old, same old that has been flooding video stores of late (when exactly did the “demented redneck family that kills people” trend catch on and does it really have that much of a fan base?).

Another major problem is the fact that all of the characters are just way too one-dimensional and nothing about any of them really stands out. Megan (Clare Grant) is the tough sister. Abby (Jillian Murray) is the weak sister. Caleb (Bill Mosely) is the weirdo who gets his jollies out of killing people and wearing a pig nose for some unknown reason. Reverend Abraham (Tony Todd) is the town priest who may be up to no good. None of these characters are fleshed out in the very least and there is nothing special about any of them. I thought for the most part the characters were incredibly boring and I really didn’t care if any of them lived or died.

The acting is just subpar which is a shame involving the talent involved. It was obvious that Tony Todd was just there to collect a pay check and didn’t put any of his usual effort into the part. Clare Grant and Jillian Murray are basically in the movie to just be eye candy but other than that there is really nothing positive I can say about either ones’ performance (the scene where they are tied back-to-back and go crazy is ridiculous. It was so bad that I came close to turning it off when they tried to bite each other). Like Todd, Bill Mosely didn’t put a whole lot of heart into portraying Caleb, but in his defense I can’t really blame him since the character is pretty much a watered down version of Otis from “House of 1,000 Corpses” and Chop Top from “Texas Chainsaw Massacre 2.” Surely to God he is tired of playing these types of characters after having done them over and over again, so I can’t really be that hard on him.

After all was said and done I was really let down by “The Graves.” It started off in a very promising manner (A dude that looked like Rob Zombie kills a family, including a baby) but it soon went downhill from there. The plot was boring, the gore was laughable (did they really have to use CGI blood?!?), I had trouble finding a character I really liked, there were some things that just came off as forced and stupid (this is the first movie I think I’ve ever seen where the smell of something could make someone become homicidal), and for some reason Pulido felt the need to pat himself on the back a few minutes into the film (yes, we are all aware that you worked on “Lady Death” Brian, you don’t have to remind us). After watching the movie I read online that there is actually a sequel in the works. Let’s just hope that it is a lot better than the first one.