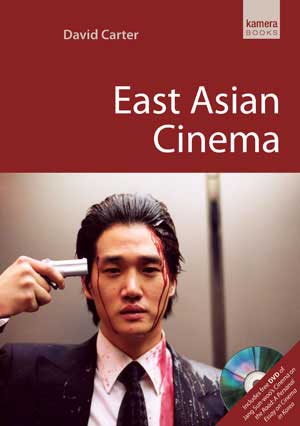 Another compact edition of Kamera Books that is focused on Asian filmmaking comes per way of “East Asian Cinema” written by David Carter. The book is a bit more rooted in Asian historics and culture than some of Kamera’s other books. This could be a plus or minus depending on your perspective. The focus here though is specifically the directors and films within the East Asian region. So they are not entirely rooted in any specific genre. I found the materiel within of a deeper nature that is no surprise considering that the author David Carter teaches film studies at Yonsei University.  For this review I included a brief synopsis provided per the product description:

“The films of these countries reflect periods of great political turmoil, rapid modernization in the 20th century, and the conflicts between modern lifestyles and traditional values. Covering films and filmmakers from China, Hong Kong, Taiwan, Japan, and North and South Korea, this is an ideal reference work on all the major directors, including Akira Kurosawa, Won Kar Wai, Takeshi Kitano, Zhang Yimou, Shohei Imamura, Tsui Hark, and Takeshi Miike. Providing individual analyses on more than 100 key East Asian films and with checklists for the films of each country, this guide to an incredibly rich and diverse body of work is useful for both ardent fans and serious students.”

East Asian Cinema covers a healthy overview of films centered in Hong Kong, Taiwan, Japan, China and Korea. In fact it’s a quick way to peruse thru alot of films per a review/synopsis description provided by the author for a collective of inclusions. Students seeking reference work will appreciate the work that went into this and movies lovers will expose themselves to the titles and analytics of previous ones. Much of the chapter contents go into detail on political, social  and cultural movements that have influenced the subject matter of these creations. Several films appearing within have gotten there start with film festival tours before being picked up for larger distribution. Yep, there are even a few noted horror titles mentioned here as well. The collective has served the region extremely well with several directors going on to notoriety as international stars within there fields. Surely there is some brilliance that has surfaced thru the trenches. Readers will also learn about how other cultures and nearby countries have interacted providing a base for some of the filmmakers best work. A compelling book, that requires a deeper sense of concentration than other genre driven cinema reads but still important none-the-less.