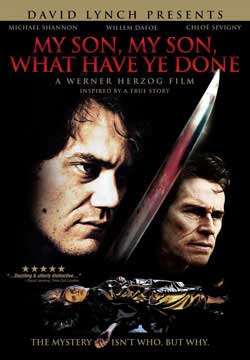 Inspired by a true crime, a man begins to experience mystifying events that lead him to slay his mother with a sword.

From film auteur Werner Herzog comes a haunting portrayal of one man’s descent into madness and murder. David Lynch was the executive producer and maybe that tells you all you need to know. This isn’t your run of the mill film, paced leisurely almost to a fault, but quite fascinating and strange.

Inspired by a true story, Michael Shannon plays Brad, a man in his late twenties or early thirties who still lives with his overbearing and slightly off-kilter mother. The movie opens with Detective Hank Havenhurst (love that name, played by Willem Dafoe) called to the crime scene. Seems ol’ Brad ran his mother through with a sword at a neighbor’s house and now he is across the street holed up in his house with two hostages. What follows for the next hour and twenty minutes is mostly made up of flashbacks as we see Brad slowly crack up. His fiancée Ingrid (Chloe Sevigny) and his theater director Lee show up at the house and offer to help Detective Havenhurst fill in the missing pieces.

And oh, what pieces they are. Seems it started when Brad was down in Peru with a bunch of his friends on a white water kayaking trip. That was when he heard the voice telling him not to go with them on the rapids. He listened and stayed behind and was saved as his friends went and all drowned. From then on he would only listen to this inner voice. Is it God speaking to him? Brad thinks so. In fact, he thinks he has seen God. He’s the puritan face on the side of the oatmeal can. He also has two flamingos as pets, or as he prefers to call them, “eagles in drag.” With his catch phrase of “so what,” it is quite evident that Brad is not quite all there.

Things only get worse when he becomes the lead in a Greek tragedy about a son killing his mother. Borrowing a very large sword from his anti-acting, theater hating Uncle Ted, Brad becomes obsessed with the sword, insisting on using it in rehearsals despite the warnings from his director.

This is one of those characters that you have to wonder what his fiancée is thinking. It’s clear that Brad needs help but sometimes they say love is blind. Michael Shannon does a good job playing a man who is slowly losing it. He often wears blank expressions and can act very child-like when he takes a fancy to something. It is clear he is in his own reality and those around him are left to wonder where they fit into it. 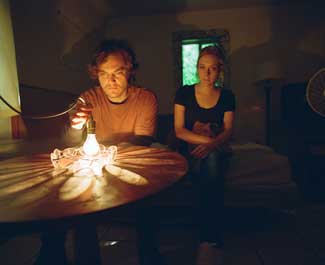 The acting is very good all around even though Willem Dafoe has it the easiest. All he really does is just ask the questions and tries his best to look interested. The directing is solid, of course, and the use of all those flashbacks help break up the pacing. The only problem I had was that I was expecting all of these flashbacks and the scenes in the present with the swat team to build up to something. And I don’t mean in a “I’m going down in a blaze of glory” finale, but something for crying out loud. This is not a movie where you don’t know what happens. In a way it is very much like Peter Jackson’s “Heavenly Creatures.” You have the aftermath of a murder in the opening scene and the rest of the movie relays how it all got to that point. But unlike Jackson’s movie, it is hard to really identify at all with Brad. You get the sense that he was weird before he went down to Peru and heard his inner voice. 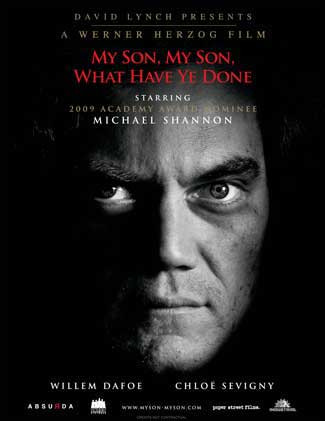 It is that disconnect that some will find off-putting. Why care what happens to him? I sure didn’t, but oddly enough that didn’t ruin the movie for me. Credit Michael Shannon and Werner Herzog for giving us an interesting if not entirely entertaining character study. One of those films that may actually improve on repeated viewings.

Tags My Son What Have Ye Done