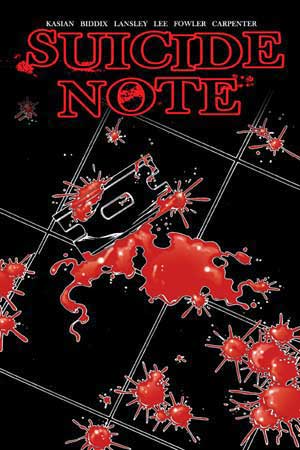 “Cassie receives a strange anonymous suicide note and after reading it she begins a downward slide from a sane and controlled world into a world of twisted nightmarish images, a mysterious man who guides her along the dark path, and a pulling in her mind, to take her life and escape the nightmare. But, if she doesn’t give into to the leading of the note to kill herself she must wonder a shadow world, forever unable to die.“

Artwork: 3.5 out of 5.0
This is a pretty good looking book. I was a big fan of the artwork not overpowering the story line here, but more just for the visual presence. I felt that the Biddix’s style was kind of on the same level as Gabriel Rodriquez and in my book, that’s pretty good. However there were some panels where the characters felt flat, and just had no depth to them. The colors were done well and helped carry the tone of the story nicely.

Story: 4.5 out of 5.0
Now this is a rare type of story to come by. Not just in the sense of subject matter, but a psychological horror book that is done right and works. I think that this is a branch of the horror genre we need more of and I applaud Kasian for succeeding. What you get in these pages is a great start to grab you, then as if it were a tower of bricks, one layer is placed on top of the next, leading to the climactic finish. There is a lot of story to be had here in only 72 pages, so get your reading glasses ready.

Dying Breath: 4.0 out of 5.0
Good artwork mixed with a great story gives this one a great recommendation from me. Like I touched on, this is a genre not really played with to much in comics and it works very well here. I almost thought I had it all figured out towards the end, but I was sent looking in another direction, and it is what had me hooked. A great read that should be a part of your horror collection.

If you would like to buy or know more about Suicide Note please check out www.hardwaystudios.com/