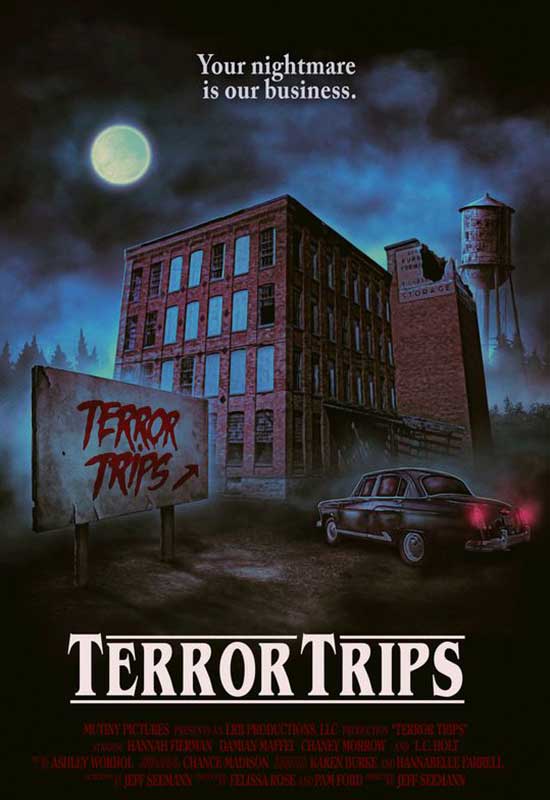 Six friends start a business, providing guided tours to the shooting locations of the world’s most famous horror films, until they find the one spot where the horror is real.

I love horror movies and I love locations. I think when you watch a film, there are moments when houses, buildings, bridges, and more become essential characters within a film. The legendary apartment building from Rosemary’s Baby, The Amityville Horror house. I could go on and on. You get the point.

We get a bit of a sneak preview of places the group visited before the terrifying trip to Poland.

They head to the legendary, Monroeville Mall in Monroeville, Pennsylvania, and Burkittsville, Maryland, “while scouting a movie location for their business, Terror Trips.” 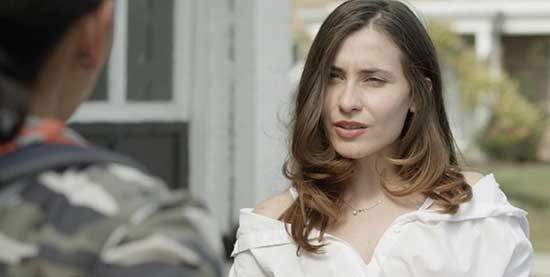 Before the journey, the friends decide to watch two classic films, Black Volga/Czarna Wolga (1973), The Texas Chainsaw Massacre (1974). I love when Leatherface is appreciated. He never gets enough appreciation. Ginny seems a little freaked out by movie. Dan and George tell them why they watched Black Volga. Dan and George are expanding.

They head to Poland to explore where Black Volga was filmed. We meet the “local guy” that George has been emailing. It turns out it’s Aleksandra (Kate Kiddo). (DON’T GO IN THE GARAGE!) Aleksandra heeds a warning to the group. She advises they tell no one why they’re in Poland. I don’t trust Aleksandra either. (You rock Kate Kiddo, I just don’t trust the character.)

The group makes a decision, and they want to leave. They do the campfire chat and they are looking forward to the next location.

Terror Trips is a fresh take on something that doesn’t always get enough appreciation. I love film locations and horror locations in general. It’s amazing to go and see the place where a movie was filmed or even something historical happened.

I visited The Waldorf Estate of Fear to meet with Angie, the owner for an interview. She was so excited and her energy was contagious while talking about this incredible location.

You can see the houses, the buildings, locations, and everything that helped make that movie fascinating. When I think about certain films like, Rosemary’s Baby, I think about the apartment building. That beautiful, unforgettable building.

I think about movies like Scream and why Wes Craven used the places he used, Friday the 13th with the camp that everyone loves to visit.

Molly decides to go out on her own, and well this doesn’t go well for Molly. Why the Achilles tendon. OH. Katarina has her people out looking for the rest of the group. Ginny is pissed and she decides to go and get the keys herself.

Aleksandra catches Ginny and Eli in her garage. She offers to help them. Aleksandra calls security which is just more of Katarina’s people. Ludwig (Ashton Rogers) shows up. Anna (Carol Ann Van Natten) is sort of the enforcer and she gives Aleksandra shit for taunting Ginny and Eli. You know, making it harder to kidnap them.

Will there be a Sydney Prescott in Terror Trips? I’m rooting for George and Ginny but it’s not looking too good for anyone right now. This is scary because there are so many good people in the world but also there are scary horrible people.

Terror Trips is a reminder that films like Hostel, Saw, Wolf Creek, The Hills Have Eyes, The Collector, and Wrong Turn are films that had frightening reminders of what “humanity” is capable of.

It’s so nice to see women kicking ass in a horror film. No offense at all to the gentlemen. Even, Anna, she is the John Kramer/Jigsaw. People sometimes forget what bad asses’ women can be.

Ginny figures out the cell phone speech was bullshit and she calls for help. The police show up, at least I think they are police. Now you will have to watch the entire movie. It’s filled with awesomeness so watch it.

Did Anna just DEXTER him?

It’s nice to watch a film with actors that are part of the horror world and part of the real horror community. They have an appreciation for horror.