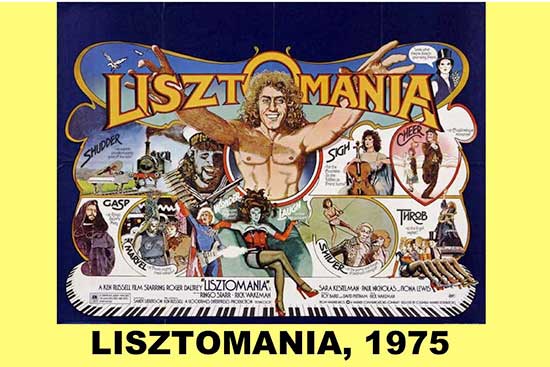 It’s possible that iconoclastic British filmmaker Ken Russell was separated at birth from his twin brother—American indie icon Russ Meyer. Both were former still photographers and technical virtuosos with a perfectionist’s eye for detail. Both explored unrestrained sexuality, often blurring the lines between violence and erotica. Each rose to prominence by openly courting controversy, in Meyer’s case with Vixen (1968) and in Russell’s The Devils (1971). Both combined social satire and melodrama with broad, slapstick comedy. Each found their greatest success exploring rock music and sixties counterculture—for Russell it was Tommy (1975), and with Meyer, Beyond the Valley of the Dolls (1970). The two also shared an obsession with Nazi imagery, most apparent in Meyer’s Super Vixens (1975) and Russell’s Lisztomania (1975). Most importantly, both filmmakers laid bare their psyches on screen, creating works that were unmistakably their own.

Like the academy award winning film Amadeus, Lisztomania is the saga of two rival classical composers. But Russell’s film adds rampant nudity, while featuring Richard Wagner transforming into a Hitler mustached Frankenstein monster playing an electric guitar fitted with a machine gun. Oh, and, unlike Mozart, Franz Liszt has a spaceship. Few films pack as much anarchy and anachronism into two hours as Lisztomania. It’s the kind of high budget, low commercial potential, hard R-Rated film ultimately rendered extinct by the blockbuster business model of Jaws and Star Wars.

The film does contain a surprising amount of genuine biographical material, seemingly filtered through Ayahuasca. I’d recommend reading up on composer Franz Liszt (1811-1886) before viewing, so you’ll be in on some of the sly references. 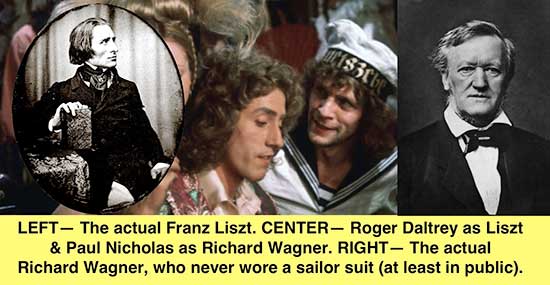 Short biography—Franz Liszt was truly the original pop star, and it’s said that audiences full of teenage girls screamed and fainted during his renditions of Arthur de Lulli’s Chopsticks—a phenomena that was coined Lisztomania. He was a romantic composer, renown for The Hungarian Rhapsodies, who also dabbled in darker compositions such as The Mephisto Waltz and A Faust Symphony. Liszt was a brilliant pianist and composer who broke conventions while revolutionizing classical music. His love/hate relationship with German composer Richard Wagner had more to do with Wagner marrying his daughter Cosima, than any musical rivalry. He was also a renowned lothario, with a preference for nobility and heiresses. Oh, and the Roman Catholic Church eventually declared him a certified exorcist. How can you not love this guy? Clearly Ken Russell did.

But is Lisztomania a great film? No, not really, but it is a genuine feast for the eyes. Its pace and tone careens from one extreme to the other, with characters inexplicably vanishing, leaving the viewer confused. Given its chaotic style Lisztomania is best appreciated as a series of visually stunning set pieces with the errant fact wriggling through its parade of clever anachronisms. Don’t bother asking why the pope (Ringo Starr) is wearing silver spurred cowboy boots, or why Richard Wagner is always wearing a sailor suit with Nietzsche stenciled across his cap—just roll with it and enjoy the sumptuous pop art surrealism.

Russell found his perfect leading man and partner in crime in Roger Daltrey. The Who’s fabled frontman gives an unrestrained performance, reveling in whatever madness the director concocted, even if it meant swinging naked from a chandelier.

Lisztomania was advertised as ‘The film that out Tommy’s Tommy,’ but falls short in one critical department. Tommy had one of the greatest score’s in rock movie history. Unfortunately, Lisztomana’s soundtrack failed to deliver any hits. The score was a collaboration between Yes keyboardist Wakeman who was more interested in symphonic pieces like King Arthur, On Ice, (That’s not a joke!) than penning hit singles. He was assisted by Roger Daltrey, who, despite being one of rock’s greatest vocalists, is not a songwriter, aided by director Ken Russell who really didn’t like rock music anyway. One hit single could have shot this film through the roof. Instead, it slid into obscurity. Lisztomania was a thunderous box office flop, forcing Russell to shift to smaller budget films like the underrated Crimes of Passion (1984). 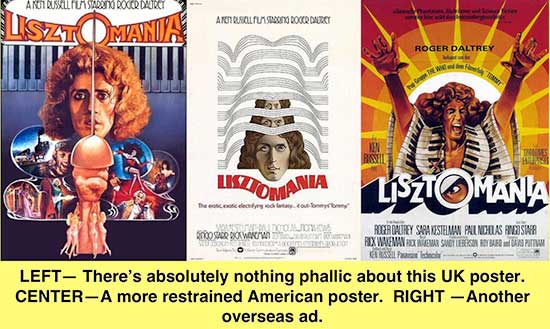 Despite the failure Russell become a fan of electronica, continuing to work with Rick Wakeman for years… without delivering a single memorable tune. Interestingly, it was She Blinded Me With Science composer Thomas Dolby who finally delivered Russell a fantastic electronic/acoustic hybrid score for Gothic (1986). I highly recommend both that film and its soundtrack.

Watch Lisztomania, but treat it like a delicious layer cake—eat it slowly, savouring every piece, because devouring it all at once could put you into a coma.

And for a bit of traditional horror reading to accompany Liszt’s chilling Mephisto Waltz, check out my latest novel PRIMEVAL WATERS, published by Severed Press and available on Amazon.