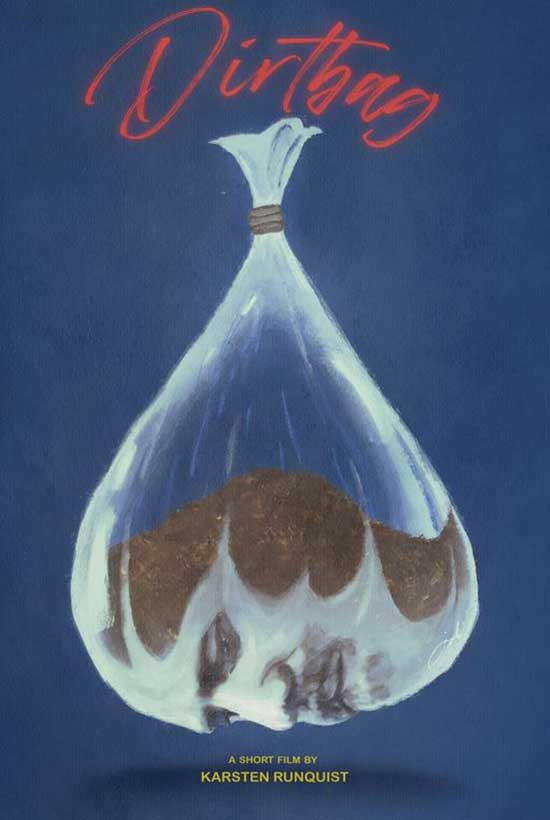 Harold has been given a bag of dirt, and he needs to get rid of it immediately.

Directed and written by, Karsten Runquist. As a writer, I often wonder what my mind is trying to process and come up with. Dirtbag is yet again making me think about my fellow writers out there in the world.

As a writer you wonder about a lot of things. What makes a person want to sit down and write? What makes a person want to tell a story? Why do some people think writers are weird? Some people think writers are awesomeness. Some days writers are just writers. I realize this is a review but all these questions formed after I watched this short film by Karsten Runquist. I thought maybe I’m diving too deep down the rabbit hole? Maybe it’s just a fucking awesome movie about a dude with a bag of dirt?

Maybe it’s about something else. Mike Brunlieb plays a man who was just minding his own business, and he winds up with a bag of dirt. “It’s dirt”, that’s right, it’s just dirt. Now, he’s trying to get rid of the dirt. How does one get rid of dirt? I know… I hear you… Just dump the dirt out into other dirt. Just dump it.

NOPE! Nope… No… It’s complicated. This man tries his best to get rid of the dirt. Nothing is working. I would recommend watching Dirtbag.