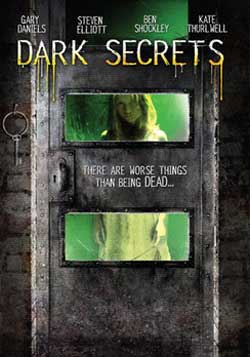 When a celebrity couple’s daughter goes missing, everyone — including the police — believes a serial killer is the culprit. The truth, however, is not so cut-and-dried. With no clues or ransom note, detectives must look to old demons for answers. Alex Walker plays Alex Blight, a paparazzo whose knowledge and connections raise suspicions, and Steven Elliot and Ben Shockley play the detectives assigned to the case in this taught thriller.

Dark Secrets stands as a solid mystery film with some slight horror embellishments. While from the cover I expected more of a full on ghost story it is more about the days of a detective who works on cases of missing children.

SGT Jack Farrell and his trusty sidekick Tom are called in on a recent missing child case of screen celebrities Lori Van Dyke and her husband race car driver Darrell. They live the charmed life, who often refer to others as “commons” but have shattered their world when their daughter Dallas turns up missing. Investigations are called into play even as they seemingly deal with the ongoing status of celebrity appearances and paparazzi that haunt them night and day.

Upon the stories beginnings, we see our man Jack suffering from a case of nightmares, hallucinations and mental breakdowns that stem from his guilt over cases he has worked and the complications along the way. In fact many times, he can’t seem to separate fact from fiction as he sees the ghosts of dead children through out the day. Much of the film runs along a pretty slow pace void of any action scenes whatsoever. The film functions like a classic whodunit and the ghost scenes are more introduced as flashbacks than for scare values. His past includes the ghost of a victim by the name of Katrina Bergman who was kidnapped and found in a horrible way. He also seems to be dealing with a former botched case, alcoholism and the memories of such.

I found myself in a rhythm of putting the clues together much as the main protagonist of the film. There isn’t a load to measure off of with the story taking on bits and pieces. Though a few times the pressure seems to escalate in Jack’s character as he takes out his aggressions on suspects and violates protocol. His partner Tom does his best to curve that behavior but is dwarfed by his partners presence. Further leads help move the investigation along which even calls in a fortune teller to help locate the missing girl. The event though as expected results in supernatural disturbances.

The term “Dark Secrets” point to the finale and the case reveals. Though I wondered if it was actually more about the detective coming to terms with his past and haunted emotions that have him in a rather solemn but professional demeanor.

The film is directed by first time Frank Falco and is listed under the original moniker name of Cold Earth. The film is UK originated which is apparent from the thick accents. Steven Elliot plays the main role as Detective Sergeant Farrell whom the camera spends most of the time with. It might easily be mistaken for a horror film but in the overview it stood as a mystery film to me. Thrill seekers should look elsewhere, fans of detective stories would find better rewards in the plot. Some of the actors aboard come from decent film backgrounds, but most of those titles were unknown to me most likely due to them being UK. I thought it was “just” an ok film, but my expectations in a film like this requires much more action drive than was presented.