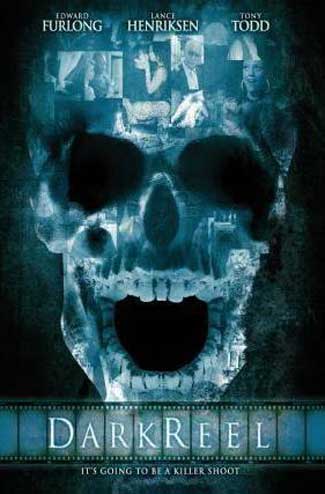 When B-movie fan Adam Waltz (Edward Furlong) wins a walk-on role in a low-budget thriller starring scream queen Cassie Blue (Tiffany Shepis), his ticket to fame suddenly becomes a ticket to terror when the chaotic set becomes the scene of a real-life murder. Lance Henriksen and Rena Riffel co-star in this Josh Eisenstadt-helmed tale based on the unpublicized crime scene footage of the 1958 murder of actress Scarlett May.

As the film begins in stark 50’s noir style, the beautiful Scarlet May is subjected to an audition followed by a brutal killing that carries on thru the opening credits. With each dismembered body part, somehow the gruesome nature of the event is overshadowed in the spirit of B&W.

50 years later, we are now in the company of a cheesy b-movie flick in process. The name if the film “Pirate Wench #3” is in full swing as a variety of Hollywood style actors and film crew members drudge thru the shots of the day. This film managed to round up quite a selection of talent for its release. Some of the acting talent includes Lance Hendrickson who plays the movie mogul Connor Pritchett, Tiffany Shepis as Cassie Blue, Edward Furlong as Adam Waltz and Tony Todd as Detective Shields. In essence, this film is meant to be half slasher thriller and half comedic look at the low budget film industry. The comedic portion come across in its realistic portrayal of a film studio who banks off of cheesy ideas and pretentionous cast members. This is painfully evident in the trailer they re-show a few times for there feature “Gnome”. In fact, if it were a real title I may be inclined just to check it out myself.

Edward Furlong gets his big chance as a contest winner to appear in the new “Pirate Wench” film and play along side his onscreen idol Cassie Blue. Up to this point, he has lived a pretty normal boring life and jumps at the chance to make a onscreen appearance. In fact his fan boy nervousness plays out pretty funny on screen Tiffany Shepis is wonderful as Cassie Blue who plays her role effortless and is apparently at home in these kind of films. The 2 of them form a quick friendship and an inevitable love interest.

Directed by Josh Eisenstadt, Dark Reel is a interesting combi of a film. On one hand we have a typical slasher formula of the unknown killer in the background. On other aspects it’s a mystery who-dunnit sprinkled with comedic overtones and some thriller aspects. There is alot of misdirection through out to curb your guess on who the killer might be and just when you thought the movie was at closing, it continues with more plot twists to mix it up even more. I think if it were left to just one direction it would fall flat but the mix of styles make for a fun ride.

Lance Hendrickson who plays Connor Pritcher does a bang up job as a B-movie mogul with a focus on profiting over content as his film company spits out cheap but somewhat effective films to public consumption. This mix of talent seems to work in a weird but wonderful way that makes Dark Reel entertaining and still appropriately gory at times. The killings remind me of the kind of reveals you’d see in old Charlie Angel episodes if they were mixed with gory FX work. At least though they put some effort into a mask that didn’t look like every other halloween store off the shelf product.

My only concern was Edward Furlong who I did enjoy in this film. He looked a bit under the weather like someone who hadn’t slept in 3 weeks. Though upon research it was reported that he had been long battling with substance issues which would explain that aspect., Though the guy is a talented actor and I’d like to see him kick the demons and pull it together. Maybe a little eye makeup would help?? In any case Dark reel is has elements of film noir mixed in to modern day slasher styles that make it a pretty cool film. This is evident in obvious cutaways that are a homage to the old school shots. Though it still is a modern piece that fans will get a kick out of for one reason or another. And remember….. to buy “Gnome” when it actually becomes a movie!!!(referring to the gag reel within the film)

A film that has fun while still delivering its share of horror.