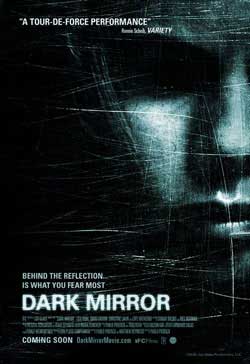 After moving into a strange old house with her husband and son, Deborah (Lisa Vidal) discovers a mysterious mirror that does more than just cast a reflection. A door to an alternate reality, the mirror awakens a dark side in Deborah that she can’t control. Co-starring David Chisum, Christine Lakin, Joshua Pelegrin and Lupe Ontiveros, this psychological thriller is directed and co-written by Pablo Proenza.

QUICK FIX:
A family moves into a “much cheaper than it probably should be” type of house, and of course we all know why it’s much cheaper than it should be – the damn thing’s haunted, duh. But not in an overflow of flies and “GET OUT!!!” type of haunted that you can find up in Amityville. No, this one goes for a slow burn yet non-boring way with the occasional death scenes kind of storytelling, as the lady of the house is a photographer and slowly but surely discovers secrets hidden in the house’s glass and mirrors that only her camera can truly reveal. Funny, there’s a room in my house that’s full of mirrors. Sometimes I go there to reflect…

RAMBLINGS:
This movie is not really your typical ghost or haunted house movie. Sure, we’ve seen the whole mirror angle done before – most recently with Alexandre Aja’s most excellent MIRRORS. But where that one went for big scares complete with blood and Amy Smart naked (ALWAYS a good move), DARK MIRROR takes the more subtle route with its storytelling, and that’s not a bad move either in the right hands. Since the hands on this flick are a first-time feature director/co-writer, I was even more impressed.

Lisa Vidal – beautiful lady, great actress. Didn’t really buy the marriage between her and David Chism at first – didn’t feel like they had very good chemistry at all. But then as the plot unfolded, I began to see that wasn’t the case at all, but that with him distracted by a big project at work and her being slowly driven insane in her quest to seek out the mysteries of the house that the bathroom mirror and her camera were showing her (and us), I finally saw the tense strain that their marriage was under in the first place. Christine Lakin as the gorgeous yet flaky and self-absorbed girl next door is also a welcome sight in any flick she decides to show up in.

Director/co-writer Proenza crafted a very intelligent little flick here for his freshman feature, and I’m looking forward to seeing what else he has up his sleeve and what he has to say next. Whatever it is, I’m sure it’ll be another thought-provoking horror flick…or so I hope. Every now and then it’s kinda cool using my brain again.

Any complaints? Yeah, but just a couple – for me personally, I’m not a fan of showing the audience a crucial yet shocking plot point that comes up towards the end of the flick only to give us a “3 months earlier” story board right at the beginning of the movie – major pet peeve of mine. To me, that usually spells “couldn’t come up with an attention-grabbing opening” and is a lazy plot device as far as I’m concerned. Also, there were enough twists and turns and different plot changes to conceivably take up two or three movies if separated and fleshed out more instead of cramming them all into one flick, and I think it would have made for a much cooler story-telling device, especially since there were more than one of those plot changes that wasn’t even close to answering themselves to my satisfaction.

LAST WORDS:
But, maybe that’s all just nitpicking in the long run. After all, when all was said and done I still enjoyed the story, the action, the performances, the visuals, and I thought the final wrap-up was very cool in a Polanski-esque, mindf*ck sorta way. This movie is now available at all fine video stores (not mine, of course…damn small towns) and online retailers everywhere. Me, I’m analyzing sh*t in the mirror way too much trying to find subtle hidden alternate realities in the reflections behind me now thanks to this flick. Snag a copy and judge for yourself.