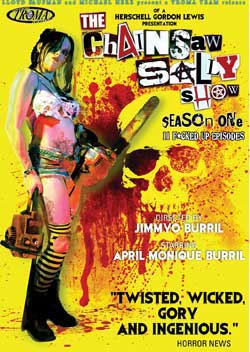 From Hershall Gordan Lewis, the Godfather of Gore, comes Chainsaw Sally! Watch as buxom, bloody, and busty Sally act as Judge, Jury and executioner on the scum infecting her small town. Bonus Features Include: 2 Behind The Scenes, Still Gallery, Music Video.

Yehaw and a bag of chips….. Chainsaw Sally wraps up a season 1 which has been shown per web episodes now making its full circle into a 3 disk DVD set. Chainsaw Sally is directed, cut and edited by JimmyO Burril and features the series exploits of 1 Chainsaw Sally who goes by the name of Sally Diamon played by the never a dull moment actress April Monique Burril.

The series gives you the option for a with or without laugh track in which I myself prefer the laugh track. Something about it gives an extra layer of humor to the most twisted moments. It also brings ya back to classic era where laugh tracks were an integral part of the show. To summarize, Chainsaw Sally is a librarian by day and psycho by night.

She loves her books, reading them, organizing them and in many ways quite obsessed with them. This motivates her to apply for a local librarian job in which after being laughed out of the room is no problem for a chainsaw wielding vixen. Her murderous rampages often come as a boredom breaker for her used to either inflict revenge or just get her kicks. Extreme maybe…but it’s the kind that’s done in fun. Every episode climaxes with some form of bloody chaos inflicted upon unlucky victims within the Porterville community.

While each kill is carried out in extremely violent rampage style attacks, often the victims in some sense deserve the wrath of Sally for some kind of rude or inappropriate behavior The attack sequences in this sense play out almost like a subconscious fantasy that we share in some form when wronged by others behavior. Though empowered and confident, Sally snaps into character from a completely different persona into the rage driven femme fatale queen bitch who solves her problems with the ease of a psychotic mad woman. In fact its fair to say, Sally enjoys these releases and has fun with them without care or remorse.

When she’s not flinging books or chasing folks thru the forest…you can find her at home with her roommate brother Ruby Diamond who indulge in cadaver beating games, and generally anything macabre, twisted or horror genre related that they can fill the time with. Many times you’ll find them comparing notes on favorite genre comparisons or horror film trivia. Other moments include charades, dress up and culture mocking to the delight of passing the time in a most creative way.

The series is shot and produced for exclusive webisodes. Each episode features a different scenario which ultimately leads to Sally chopping up someone or indulging in her murderous outbreaks. The cast of characters include Jordan Wyandt as Gretta Morehead, Nicolette Le Faye as Miss Busy Bee, Aaron Martinek as Officer Zeke Patrillo, Lilli Burrill, Azman Toy, and Brad Smoley as Officer Earl Nylund with an assorted band of other odd locals. Bill Price plays the role of a character simply referred to as “cowboy”. While we assume him to be a vigilante detective of some sort his role is to play the protagonist of the series. Reports of missing and lost persons seems abnormally high for this area creating a batch of unsolved crimes. Cowboy is determined to pick up the slack where the “beyond useless” local police have failed. Miss Busy bee provides a vehicle for Sally’s comic relief in which she is often tortured, killed or attacked in one form or another.

Sally seems content in her Clark Kent transformation from conservative librarian to thrift store punked out vixen. Though this persona change also allows her to target her next victims pretty easily.

April Monique Burril exudes sex appeal, eroticism and chaos all in one busty school girl meets leather face package. Fans will enjoy this obvious counter balance series that borrows a sense of irony from old sitcoms and retro showings in a present day massacre freekfest. Sally is horror’s new female anti-hero with a grudge to itch and a bloody fantasy to play. Never has watching the web been so fun and gory!