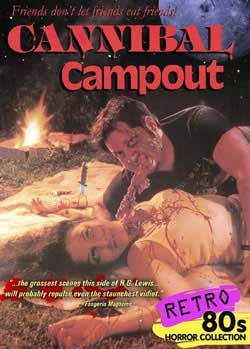 Four college friends head out to the woods for a nice camping trip (apparently without a tent, sleeping bags, or any other supplies that are crucial to camping). Once they arrive they are immediately involved in an altercation with a pair of local rednecks (one of whom has the most annoying voice ever caught on film in the history of cinema). Little do our heroes know, the rednecks are actually vicious killers who get their kicks out of slaughtering and eating anyone they come into contact with. Will our happy campers be able to get out of the woods alive or will they all just end up being tomorrow night’s dinner?.

If you look at the synopsis I’m sure you’d agree that this movie sounds kick ass, doesn’t it? It has all the elements needed to make a great slasher film, and I went into it with very high hopes and just had the feeling that I was going to love it. Unfortunately I realized just mere moments into it that I wasn’t going to like it. It is quite bad (and not in a good way) and even though it was mercifully short it still seemed to drag on forever. Why didn’t I dig it? Let’s break things down a bit and you’ll understand.

The acting can only be described as atrocious. I know that most of the people involved are not professional actors, but still the acting is some of the worst I have ever seen outside of a Nicolas Cage or Matt Damon movie. The acting is just painfully bad and it is pretty apparent that co-director/actor Jon McBride just got together with some friends and they grabbed some people that they knew and asked if they wanted to be in a movie (not that there is anything wrong with that, I have done the same thing in the past, but at least the people I got could act at least a little). Pretty much everyone in this movie just reads his or her lines without of any hint of emotion behind it, and there are times I am pretty sure some of them are reading off of a cue card that someone is holding off camera. Normally bad acting doesn’t really bother me (and sometimes it can even make a bad movie enjoyable) but sadly that wasn’t the case this time.

I found the entire cast of characters to be unlikable and I didn’t really care if any of them lived or not. I had no feelings for any of the four main campers and was actually pretty eager to see them get killed off. In addition to the campers we also have a couple of their friends to show up at one point to just be fodder for the killers. One of them has a rocking mullet and a hockey mask while his companion has horrible acne and a mask that looks like it may actually be a thong (they have masks because they are planning on using them to scare the campers. I know I would certainly be scared by an ugly dude wearing a thong over his face and a guy with a mullet wearing a hockey mask). Thankfully these two have very little screen time as they are pretty much dispatched by the crazy rednecks within minutes of showing up.

The killers are nothing special either and they are just a trio of bargain basement violent rednecks (one of them being retarded-I think-who wears a flight suit complete with helmet and mask). One of them looks like a cracked out, hillbilly version of Eli Roth and one of them talks just like Popeye (I really hope this is not this guy’s real voice, if so I really feel sorry for him). None of these guys are really that intimidating and I really couldn’t see anyone being afraid of them as they were just more annoying and goofy than anything (and why does the retarded one look a bit reptilian when we see his face for a brief moment? Did a lizard get his mother pregnant?)

The only good thing that I can say about this film is that the gore is abundant and is done pretty well considering the shoe string budget that was involved. We get some cool stuff such as an axe to the eye, various stabbings, and a ripped out fetus (“Looks like a girl…tastes like a girl too.”) Overall there is some fun blood and guts here and if nothing else it helps to take your mind off how bad the movie is.

Unless you’re just a fan of bad movies I really wouldn’t recommend that you see “Cannibal Campout.” I enjoy low budget horror flicks with bad acting as much as anyone else but even I have my limits on how much I can take. While I admire the fact that these guys actually went out and made movie it still doesn’t change the fact that it is pretty bad. If you are still interested in checking it out I suggest that you do so with a group of friends so you can do “Mystery Science Theater 3000” -like commentary 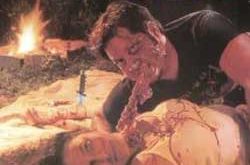