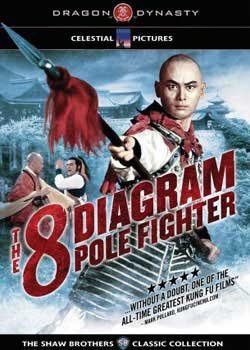 The film is based on the true story of a man who, after his father and brothers are killed, develops the Yang Ga Ng Long Baht Gwa Kwun (Yang Family 5th brother eight diagram pole) style.

We are beginning to see alot more older entries make their way back into the kung fu films circuit, one such film is titled 8 diagram pole fighter which is one of the many under the famous Shaw Brothers collective. I’ts an enjoyable classic that martial fans will really want to add to their collection. For summary sake, I found it was best described in a recent wikipedia article.

“The Yangs are a well-known family of soldiers in the service of the government but are betrayed by a government official (Wang Lung Wei) conspiring with the Mongols. All of the Yang family males except the 4th, 5th, and 6th brothers are killed (played by Hsiao Ho, Gordon Liu and Fu Sheng respectively). 4th brother is captured by the Liao and is not mentioned again (in the source story he marries a Liao princess and returns). Fu Sheng loses his mind after the death of his family, while the other brother (Gordon Liu), takes refuge in a temple to put his anger and past behind him. Liu’s superb martial arts skill, particularly with the quarterstaff, impress the temple’s senior monks. After refusing to leave the temple at first, Liu later fights for the right to depart after he learns that his sister (Kara Hui) has been captured by the conspirators and a senior monk is killed by the Mongols. Liu confronts the Mongols and during the ensuing battle to free his sister, the monks from the temple arrive to lend support and help him to defeat the Mongols.

The film is regarded as one of the Dragon Dynasty classics employing classic styles of marital arts and weaponry fighting. The films comes with an English audio track as well as the formal Asian ones which is always a nice bonus for viewers like me who like to just sit back and just listen rather than read. The audio tracks though are slightly off cue with some of the subtitles, meaning that the subtitles are almost from a different script though are still relative. 8DPF is typical to Asian martial arts films that quickly goes from dramatics into fighting almost every other scene. The movie is comedic at times with fast acrobatics choreographed with dramatic pauses and over the top sound effects. Though, make no mistake the moves are fast, timed perfectly and a joy to watch. The main focus of this film is rooted more in the weaponry exchanges than just straight martial arts combat. Add to that some occasional wire work and some rather impressive balancing moves and you’ve got all the makings of a classic here.

The movie is rooted much in the rational aspect of training, progressing and eventually a stand off of champions. Cooler highlights that also have a sense of the ridiculous to them is seeing the monks train against wooden wolf statues. As explained, they have to be prepared for confronting beasts along the way and so have several wolf statues that articulate as they train. The outbursts of overacting Asian fighters at times might feel like a stretch but it adds to its charm. 8DPF begins with a severe battle of the Yangs against the Moguls. The results leave  3 of the brothers who are sworn to vengeance. The 5th brother succeeds at progressing by shacking up with monks who would rather he didn’t and went on his way. His persistence becomes his strength as he trains and battles against foes along the way. The pole being the weapon of choice often is pitted against a counter pole device that wraps around the poles and acts like a claw. In one scene a skilled monk implants his pole into the mouths of 2 opponents and yanks out their teeth. The film is not gory but it does has its share of bloody moments. Good times! – Don’t bother reading about it, just check it out for yourself….