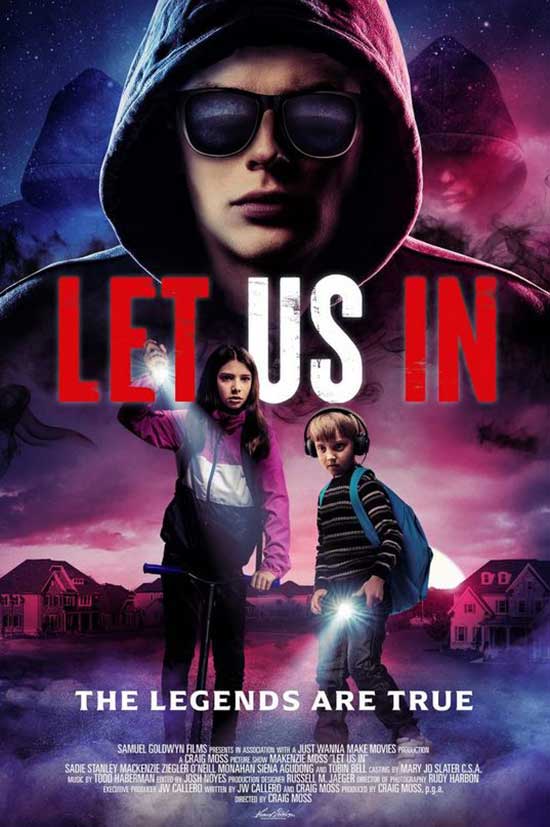 A spirited girl starts investigating the sudden disappearances of several missing teens in their small town. Realizing there might be something deeper happening, Emily might be up against forces she can’t even imagine.

Directed by Craig Moss (Bad Ass), and written by Joe Callero and Craig Moss, Let Us In, starts out with a definition of “Black-Eyed Kids”, this isn’t going to be creepy at all…

The definition reminds us that they “resemble children with pale skin and black eyes who are reportedly seen hitchhiking” and more.

The X-Files, extraterrestrial music starts, and we meet a group of teens partying in the woods. (Horror 101 No, no. But, it’s a movie, the characters don’t know it’s a sci-fi/horror movie. I know this!)

Teenagers are disappearing, and there is a cause for concern.

Carly (Yasmeen Fletcher) and her boyfriend are having a nice time until some creepy dudes show up, and well, it didn’t go so well.

Emily doesn’t seem thrilled with what’s going on in school so, she heads to the local record store. We meet Burke (Darrin Heames). He apparently runs the store. This movie seems so calm and the BOOM, TOBIN BELL appears glaring at Emily as she rides by his house.

He’s semi scowling, his arms are folded and, he plays Mr. Munch. Emily and her brother Chris (O’Neill Monahan) are doing something like trying to maybe contact something otherworldly?

Okay, back to the calmness of this movie. It feels like it will be creepy. It’s sort of at a slow pace but there is a story here. I know I have so many questions.

There is a search party issued Carly and her friend. The creepy guys show up at Emily’s house, they just keep saying “let us in”.

Emily calls the police…. The police don’t seem to believe her. They appear at the windows, on the roof looking through the skylight. It gets intense, and all of the sudden after a chase… they disappear.

Okay, one police cruiser with two cops in the cruiser. They question Emily and in stereotypical behavior, the cops treat Emily like she is just insane. Mark Sparks played by Chris Gartin tries to explain that it did happen. The cops are not convinced.

Jessie (Sadie Stanley) who may the sister? Let Us In is modern with social media, YouTube, and doing tutorials. Emily and Jessie get ready for a party.

Emily isn’t having a great time at this party. The “mean girls” are trying to reverse psychology her into drinking and doing what they are doing. Emily speaks up for herself. That’s a positive. (Never do anything for peer pressure folks.)

Emily and Christopher need answers after finding out there was an eyewitness. Someone who saw the “let us in” people. Who is the eyewitness you ask? Mr. Munch of course. Tobin Bell delivers a creepy yet beautiful speech about the creepy kids. He wants to help Emily and Christopher because of all the kidnappings.

Tobin Bell’s character Mr. Munch talks about the loss of his fiancé. He also has a detailed board that goes back to the 1960’s. Emily and Christopher realize something as Mr. Munch is explaining everything about the alien kids.

Mr. Munch gave Emily a whistle to “summon” the “let us in” people. Emily and Christopher use the machine they made to contact otherworldly people. They do make contact. There is communication between Emily, Christopher, and the elaborate set up box they made to talk with people from a different galaxy.

Emily calls in some reinforcements and uses the whistle that Mr. Munch provided to call for the “let us in” dudes. The group is trying to stop them and find their friends. This doesn’t last long. Oh, man, I expected that to happen and it actually happened. WHY, Why Craig Moss?!

Make sure to check out Let Us In.