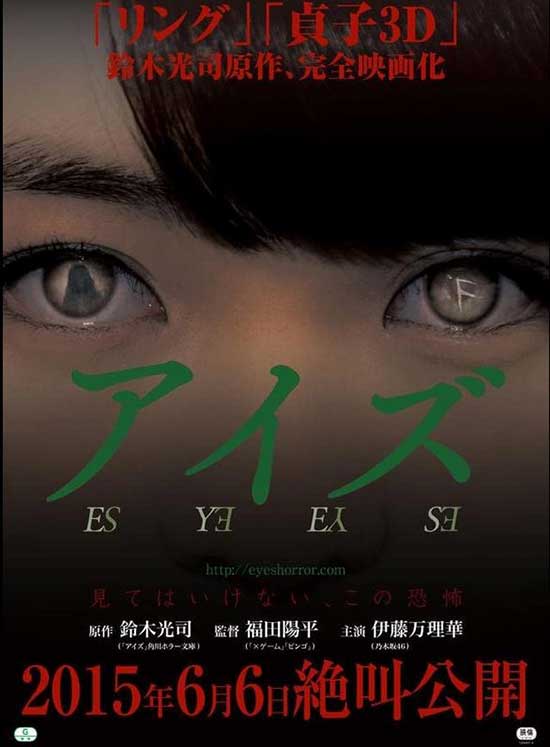 A student is haunted by chilling visions surrounding her, leading to sinister acts that put her life and those around her in danger.

The rather weirdly titled Eyes (weirdly as in, the story has nothing to do with eyes) is a 2015 horror offering from the director Yôhei Fukuda. It presents a thoroughly forgettable story of mystery and ghostly encounters, with very little going for it.

Yukari (Marika Itô) is an ordinary schoolgirl whose life gets turned upside down after mysterious letters start appearing by her front door. The sinister graffiti is soon followed by a death of her school friend and then spectral apparitions all over her apartment. How are these events linked and what are the enigmatic lettering trying to spell? These are the questions that keep the film going, until its thoroughly underwhelming end.

Eyes is an attempt to make a psychological horror about the devastating affects of trauma in the style of A Tale of Two sisters (Janghwa, Hongryeon). Unfortunately, it never really manages to amp up the tension in way that a film of such calibre should, resulting in a lacklustre story that makes you check your watch more than once. Even with a completely average running time of hour and a half, Eyes manages to somehow feel overly long. The story drags on in such a dull manner, that even the intermittent scare scenes do nothing for the suspense. Instead, they are dealt with in the same humdrum approach as the rest of the story, making them some of the lamest scares out there. And they do not need to be. There are a few very good ideas in the mix and a scene or two that has been executed very cleverly but somehow, they still lack the impact that they should have. A lot of this is down to the fact that Marika Itô seems to be incapable of portraying any kind of fear or terror. Her reactions to ghostly figures walking around her home seem completely out of place, detracting from the potential impact that scenes could have had and further enforcing the tediously sluggish pace of the film.

The mystery behind the ghost story is not especially original one and most viewers will probably get the gist around the halfway point. Perhaps not the whole thing, but enough to not be overly surprised by the ending. Maybe Koji Suzuki’s (author of Dark Water and the Ring series) original short story Shirushi, offers something more suspenseful and mysterious, but it certainly has not translated well in the film format. There is also a bit of a problem with some rather glaring plot holes. For example, the death of Yukari’s school friend in the very beginning of the film seems to have absolutely no connection with the rest of the story. It is presented as a significant event and as something that is directly linked to the mysterious letters appearing by Yukari’s door, but in the end, this tragic loss in completely forgotten and never mentioned again, leaving one wondering what the heck was the point of even introducing such storyline in the first place?

The special effects are semi decent, but nothing to write home about. The ghost girl that seems to follow Yukari around is sufficiently creepy, but perhaps a little cliché. We have all seen a little girl in white dress and dirty, long hair hanging over her face one too many times for it to still be scary and I am sure the Fukuda and his make-up department could have come up with something a bit more interesting if they really wanted to. There are a few scenes where she makes a sudden entrance to the scene and manages to make one jump, but those are few and far between and not enough to keep you truly interested.

I would not purposely seek out Eyes unless you are some sort of hard-core Koji Suzuki fan that needs to see every film adapted from his work. It is very unlikely to be worth your time otherwise.