Top 5 of the Best Horror Movies for Date Night

After you’ve spent some time developing a rapport with a new partner on a dating site, the next step in any blossoming relationship is the first date. What better way to get to know someone better than relaxing on a reclining couch, refreshments to hand, watching an exciting film? Horror movies might not seem conducive to romance, but so many people love watching these. If you and your partner are both aficionados if you prefer zombies, vampires, and serial killers to goofball romcoms, here are our top five ‘must-watch’ horror movies that were compiled for you by dating experts from maturetenders platform.

When this film was first released it courted controversy, its shocking content labeled far too explicit for the sensitivities of 1970s audiences. There were reports of movie theaters being plagued by people fainting or exiting long before the final credits. There are certainly many terrifying sequences in this tale of a child possessed by Satanic forces. Notable scenes include one where the victim’s head rotates in an almost-complete circle, or berates the priests attempting the exorcism with language no 12-year-old should ever contemplate unleashing! On date night, this is one film that will have you and your partner huddling ever closer together.

Japanese filmmakers have a knack for producing genuinely horrifying features, and this is a prime example. Although it has since been remade and given a slick Hollywood makeover starring Naomi Watts, for your date night thrills you’ve got to opt for the original. The premise is that an investigator is looking into the existence of a ‘cursed’ videotape that will result in the death of any viewer after seven days. This is the genius of this slice of unrelentingly enthralling horror – the more you get drawn into the disturbing footage yourself, the greater the anxiety. You might want to watch this one with the lights on!

Director John Carpenter is a master of suspense, and this forerunner of today’s slasher movies was pinning audiences to the edge of their seats decades ago. A mental patient, Michael Myers, was incarcerated for murdering his sister, at the age of six, one fateful Halloween night. When his psychiatrist and a colleague arrive at the sanitarium to transport him to a court appearance, Myers absconds, stealing a white mask from a hardware store. He then embarks on a ruthless killing spree. Any time an impervious teenager saunters into a scene, you suspect it will only be a matter of time before that horrific expressionless mask appears framed in the window beyond.

If Halloween raises the jump scare quotient, this feature will raise it through the roof. Directed by Ari Aster (his debut feature) and starring Toni Collette, a mysterious entity begins haunting a family following the death of their grandmother. As her descendants attempt to unravel what could be behind the increasingly chilling experiences, events become ever more sinister. To say the climax of this film represents one of the most fearful white-knuckle rides you are ever going to encounter in a horror movie is sufficient reason to add it to your date night list. 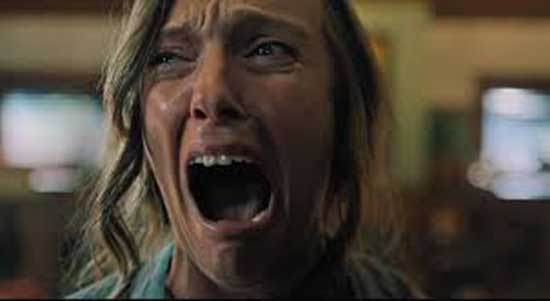 Another captivating horror outing, it would be worth warning you that this is a spectacularly gory feature, centered on an early 20th-century religious cult whose leaders demand blood – lots and lots of blood – to appease the loathsome deity they rely on for fertilizing their lands. Filmed in scenic but stark Welsh landscapes, and starring Michael Sheen as the head of the cult, when his unhinged lieutenant Quinn (Mark Lewis Jones) usurps his command, things get really nightmarish!