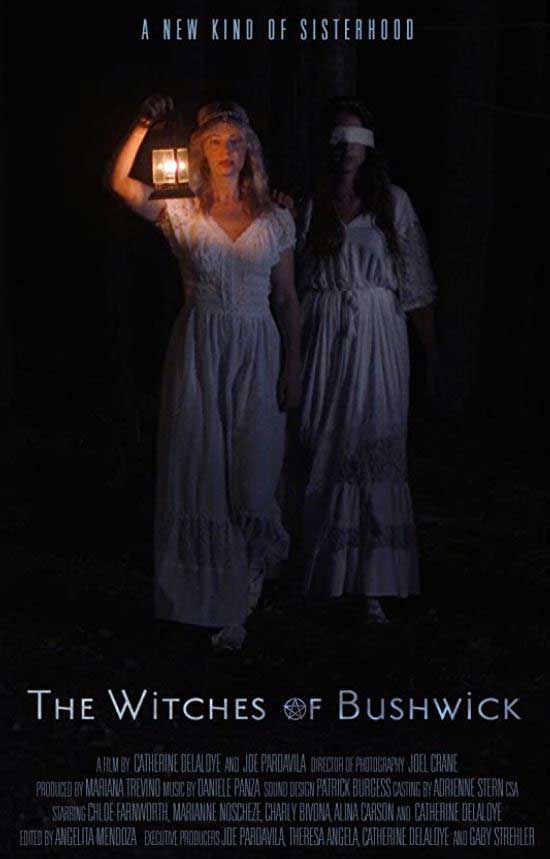 WITCHES OF BUSHWICK is inspired by #WitchesofInstagram one of social media’s darker and most trending sub-cultures. The film talks about the people behind the hashtag, blending horror and satire to produce a biting critique of social media. The short film centers around a young woman who is about to be initiated into a modern coven. When things – inevitably – start to go wrong, however, the witchy influencers find that they are no match for the actual supernatural.

More short films, kiddies! Today we have THE WITCHES OF BUSHWICK, written and directed by Catherine Delaloye and Joe Pardavila. This film has won several film festival honors, including best director, best score, and best ensemble.

I will preface this review by stating that i am not a fan of “witch movies”.  They’re so ridiculous, and i just feel like actual practioners of Wicca and related paths don’t need the grief that comes with these sort of movies.

That being said, the writers on this film apparently feel very much the same. Our story is based loosely around an internet phenom called (hashtag) Witches of Instagram. If you know, you know. If not, its not hard to look it up.

Chef don’t judge. Its just not my scene.

Anyway, in this film we meet Margaret (played by the director, Ms. Delaloye) as she is preparing to enter her initiation into a coven of modern witches. They don’t seem like bad people, really. A bit on the hippy dippy side, but mostly are very welcoming to the new acolyte.

The coven is led by Mother Anika (Chloe Farnworth), a sweet enough lady who has brought these women together in spiritual pursuit and sisterhood. However, as the film progresses, we see how each one of the women has their own side hustle related to the craft. One sells crystals to help people stop smoking, one is preparing to sign on to promote a holistic diet aide, even Mother Anika has a live stream in which she gives a “spell a day” for a small subscription fee.

So you can read that however you want. Not the first religious/spiritual organization to cash in, and certainly not the last. It is important to keep all of this in mind, however, as the time for Margaret’s initiation draws near.

See, there’s one real problem with claiming to be a modern witch….when the supernatural comes calling, you better have some idea what you’re doing or you are toast.

The award winning score (composed by Daniele Panza) is on point, feeding the overal ambience and vibe of the film. Its subtle, and at times you forget its even there. Exactly what a good music score should do.

Special effects are minimal but very good when they appear. The credits name Nicholette Talley and Ori Gilady as the entire make up department. Both have a decent list of credits to their names, and the work in this film is quite good.

The award winning cast play off each other well. The different archetypes are clearly demonstrated without becoming cartoony or silly. It would have been easy to go for the standards here but the extreme stereotypes were avoided while still paying homage to them.

Overall, yea… I have to admit I liked this film. its scary, snarky, not a little satirical, and entertaining. Its got a little bit of everything and it works.