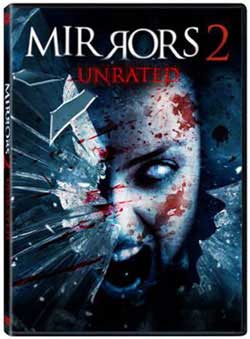 When Max, who is recovering from a traumatic accident, takes a job as a nighttime security guard, he begins to see visions of a young mysterious woman in the store’s mirror.

In recent reviews of the new thriller Mirrors 2, it seems the conceptual views of haunted mirrors and self mutilation were split down the middle. The idea that a soul or souls could haunt and influence from beyond the grave using only ones reflection was in fact in my mind a different take that hadn’t been explored fully in recent offerings. Sure, we have seen plenty of films with that 1 or 2 scenes where a ghostly invader attack from behind or makers that easily effective jump scene though out film history but to bring it full circle was definitely something that appealed to me.

In Mirrors 2, Keifer Sutherland is long gone but we still have some fine acting performances per Nick Stahl who plays Max Matheson and a long time favorite of mine with William Katt playing his father Jack. Although Katt has stayed busy in other genres, it’s great to see him taking the horror film plunge and stepping into something new. Katt, you might remember form the original “House”, Carrie: and his epic ” Greatest American Hero” series.

Getting back to the film, Max is recovering from a car accident trauma that left his fiance dead. His life has been in shambles since then with a bout of drugs and alcohol. Though he is on the upswing trying to get his life back together and attending local psychiatric sessions. His father, an owner of the high profile “Mayflower” business is prepping to re-open a new branch local to them. The previous one from he first film has been shut down and beyond that I’m not exactly sure what else what was involved at the moment. Though we did leave that branch with it being a portal cesspool to evil energy.

Jack needs a security guard right away to fill a lost position, and calls upon his son Max to help him out by taking the job. The former guard had a breakdown one night and almost killed himself by chawing on a mouthful of glass. After a bit of reluctance, Max agrees. Though what they all don’t realize is that the new store has also had one of the original mirrors shipped over as a iconic piece to occupy the new location. This of course begins the haunting all over again. Almost immediately a rash of suicidal looking deaths begin to occur…… some more accidental based than others that all end in violent circumstances.

In fact the death scenes are pretty effectively done and definitely some of the high points of this film. What is more disturbing though is the haunting mirror interactions which even though we know as an audience as simple editing camera tricks are still chilling and eerie to watch. Something about that connections we have with mirrors and the idea of reflections not always matching up is a central inherit fear we all share. That idea is what works effectively in these films that also incorporates the effect of the reflections inflicting harm upon into the real world. Max begins to get it right off the bat thinking that he might be just having psychological jolts from his past trauma. When folks start showing up dead, its obvious that the mirrors themselves are out of control. As the story digs deeper, it was more apparent that the haunting is actually rooted in one newer source than old phantoms. This creates a mystery thriller direction which on one hand completes the story nicely, but on the other hand is probably not horrific enough for my tastes. Mirrors 2 has a great first and 2nd act leaving the 33rd to be more resolved than for scream tactics. Still its a good film, to watch and fans of the first should dig alot of the same approaches. It still found several scenes a bit chilling especially when confronted by Doppelganger like reflections. 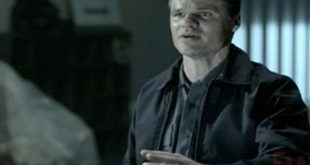 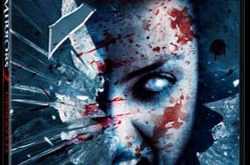