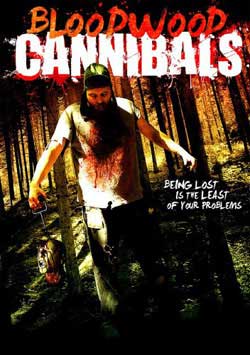 A documentary film crew is stalked by a pack of cannibals.

In the film’s introduction, we are told that the Northern Ca eco system is in peril with animals and predators relocating due to forest fires. Along with the relocation, comes a problem of finding new ways to feed. The forest’s wildest hunters..aka man have also had to rethink their food supplies. This has resulted in an outbreak of missing children abducted for this very reason.

As a local film group makes way thru the local forest, they unexpectedly come across a feral woman. For clarification, this is a wild woman who appears to have been living off the forest for quite some time and unable to speak beyond grunting. The concerned group shoots her with a tranquilizer gun and brings her in to a local hospital for care and observation. Though as expected, the wild stays wild and doesn’t cooperate too kindly to being relocated, poked and observed. The group shows concern and tries to interfere with the local authorities decisions but that proves to be fatal for the woman who escapes only to get hit by an oncoming vehicle.

Before I get too ahead of things, I should have mentioned that the group is actually part of a documentary style film show called “Things of the Unknown” (I think that was it??) They of course create those kind of shows that go in search of oddities and urban legends. The team is lead by pseudo celebrity Nigel Thorne (Nathan Anthony Carter) who sports a rather annoying Australian accent and like to push is power around.

This journey for them is all about capturing a “big foot” story whether real or faked. What they find though is that the hills are alive with a small but hungry bunch of cannibal hillbilly-like savages. “Big daddy” (Joe Calavita)leads the pack of derelicts who don’t speak much themselves but like to terrorize those who come into their territory. The general premise is more partial to the 2nd half of “Hills have eyes – part 2”. If that doesn’t ring a bell, then it means its alot of chasing, fighting, and killing  within the forest. “blood wood forest” to be exact which stands for the red sap that the local trees produce. The cannibals are hungry but the name of the game is survival, in which the group has to endure as these ugly woods folk chase them around from one section to the next.

We loose quite a few of the film crew along the way that get killed, tricked into being killed or just ripped apart and eaten on the spot. A favorite for me though was the unlucky chap who gets his torso ripped off as they feed on his innards. The theme of the movie suggests the content that it starts with. Which is, nature s evolving in different ways and cannibals are being born all the time. This moral will get its chance to expose itself deeper in the finale.

For a film, its mostly low production work that still works when it needs to. I did tire of too much woods footage and chase scenes though those were complimented with clever kill moments. Much like the film companys other production “Wake the witch” there is a 3/4 of the movie lull that needs to be cut down somewhat. These are those moments where the dialog drags on too long and nothing really changes in dynamics. As we move past this we get a bit of “predator” like tribute moments. We also get some character transformations which seemed a bit of a stretch for the time within the woods. “BloodWood Cannibals is a heavy mix of cool, boring and redundancies that wont be anything you haven’t seen before but still offers some highlight moments to get you going till the next. Bloodwood Cannibals was written and directed by Joshua A. Siegel