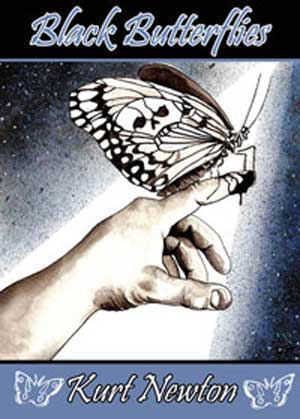 I’ll admit this before I get going … I’m a bit of a Kurt Newton fan boy. I published his truly gut-wrenching mind-altering short story “Butter Red and Diamond Eyes” in my (now defunkt) online venue Horror Quarterly – (I republished it in the “Best Of…” book I brought out based on the first three issues of Horror Quarterly). I’ve published Kurt’s stories in the Chimeraworld anthology. I’ve featured Kurt in a Red Scream magazine article “The Skull Fuckers” about five non-mainstream writers I think should be given more self space in book shops so the average Joe can experience worlds as insane as they’ll never be able to conjure up for themselves.

The novella he delivered (a 100-print-run Black Ink Chapbook exclusive) is called “Black Butterflies” and it’s not at all the horror extravaganza I was expecting. So, why am I reviewing it for ? Well, I’ll tell you later.

So, what’s the story? Fear not, by the second chapter the main character Timothy (no surname) works the night shift as a warehouse security guard so he can ‘keep away from people’. I say this because the first chapter is about a boy and a nasty TV-addicted mum – this and the nature of the illustrations by Stella Danelius gave me the dread that I was reading a kids book. Carli, a girl from nowhere, is hiding out in Timothy’s place of work. What should he do? Shop her? Help her?

And that’s it. We see how this quandary is resolved and why these two souls had to meet.

Admittedly, it reads like a long short story – I could have read a volume of five of these, that’s how world-renowned Japanese author Haruki Murakami does it, five or six long stories in a single volume – that’d be a proper baptism in the waters of Kurt Newton’s refreshingly surrealistic worlds.

Although Black Butterflies isn’t the horror rollercoaster you might have expected me to review for this venue, this 60-page book concretes Kurt Newton’s reputations as POTENTIALLY the new Clive Barker, and by this I mean the Clive Barker who went on to write such tomes as Galilee and Abarat. Now, I realise that this isn’t something I should state lightly but Black Butterflies is a pre-cursor to Kurt Newton’s themic and stylistic transformation to mainstream published uber author of fantasy fiction for teens. This little book is so obviously a step in a new direction and I might not like this new Kurt Newton, maybe I’m pining for the enfant terrible of non-mainstream adult horror but that’s just something I’ll have to live with.

Did this book protect me from mediocre horror product? Just about. It’s fresh portrayal of loss and fear is quite unique and very touching.

Do I hate this book? Not at all. But it’s not what you’d call normal horror.

Did I finish it? Well, it’s only 60 pages, but even then I WILLINGLY finished, and relished, it.

Come on, Kurt, deliver the reading public that 400 page super-escapist novel of amazing parallel reality already – your readers deserve the Grand Tour of the Mind.