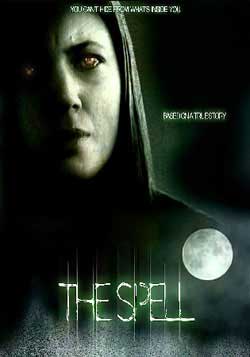 Jenny is at her wits end being checked into a mental institution. She screams when she is shown into a dark room that there are other people in the room and things just have this strange habit of floating around her. If that wasn’t enough she also finds that she has developed a new speaking voice and hordes of dead flies are now showing up all over her apartment……all of this over a guy?

Owen Carey Jones’s The Spell is very British and like most British horror it is soaked in heavy atmosphere. From the opening credits the viewer is told that what they are about to see is based on a true story, and during the credits one can easily learn that the story is based on the real experiences of a woman named Emma Whale.

The Spell starts by showing the viewer two examples of witchcraft being performed. The first example that is shown involves a coven of witches in a woods doing a ritual, the second a group of three girls who sit in a bedroom plotting revenge against a boy who has done one of them wrong. One of these girls is named Jenny, who is the focus of The Spell. The other two girls are Clare and Vicky who are Jenny’s friends and play various roles with a lot of the subplots that occur during the film. Jenny and her friends attempt to start to do the spell when suddenly Jenny’s mother storms into the room and forces the girls to stop, but not before the viewer gets the chance to see a glass glide across the table on its own. This is the viewer’s first clue that Owen Carey Jones intends to scare viewers using atmosphere and not so much of the red stuff.

When we get to see Jenny again she is already in a mental institution. She screams and throws a fit when the nurses attempt to show her into her room claiming that she sees people inside of the room. It is only when a psychiatrist starts talking to Jenny that we start to get the story from her.

Jenny has had a rough childhood mainly stemming from the fact that neither one of her divorced parents want her around. Her mother’s boyfriend doesn’t care too much for Jenny and actually packs up her things and forces her to move in with her father after Jenny breaks one of his antique vases. Jenny’s father takes her in and Jenny finally finds a parental unit that she gets along with in her fathers girlfriend, but it is only a matter of time before their relationship is over and Jenny is once again forced to return back to her mother’s house. When Jenny returns she finds that she now has to stay in the basement since her mother’s boyfriend now uses her old room to hold some of his belongings. It is in this said basement that Jenny truly gets herself in trouble when she sneaks her boyfriend Rick over for a quick romp, Jenny’s mother returns home earlier than expected and catches the two causing chaos to ensue rather quickly.

Jenny informs her psychiatrist that after this last round with her mother she finally decided to get a job and move into an apartment with Rick. When questioned about this Jenny explains the life that her and Rick lived was one full of boozing and drugs, but she assures her psychiatrist that she hasn’t done any drugs for years this leads to one of the first scenes of someone not believing Jenny when she tells them the events that are going on around her.

Things start to get hairy for Jenny and Rick when the two of them start to become interested in other people. Jenny starts to find herself attracted to a coworker named Ed and Rick has a girl named Kate who follows him around, during an argument Jenny screams at Rick that Kate is in love with him. Jenny starts to spend more and more time with Ed which of course sends Rick on edge (most of the beginning of the film is just a picture into these young adults lives) and eventually the two call it quits.

It is only after the said relationship has hit the rocks that the viewer is finally treated once again to scenes of the occult. We quickly learn that Ed is heavily involved in the occult; he even has an altar in his attic! Kate also is involved in witchcraft and she has already casted spells in the past including a venomous one which caused a car wreck and the death of a pet dog. Kate convinces Rick to do a spell with her and soon life becomes much harder for Jenny.

It takes a while for The Spell to build up but once it does the film delivers some pretty good scares. Jenny suffers quite a bit because of the witchcraft her reflection has obviously changed into something terrifying (this is handled very well by actually never letting the viewer actually see what the reflection looks like just the look of horror on the young girls face), her kitchen is soon littered with literally hundreds of dead flies, she hears voices and starts to see figures in the shadows, objects start to float around the room and Jenny even starts to speak in an inhuman voice.

Most of The Spell merely deals with the lives and troubles of its young cast and they try to deal with modern life and love, the occult only gets involved around the halfway point of the film. The scares come on pretty well though and the build up is definitely worth it once they start to come in.

There isn’t much red stuff flying around on the screen so the gore hounds are going to be pretty disappointed with this title but those of us who like our horror to have a little atmosphere are sure to eat this one up, definitely recommended on a stormy night.