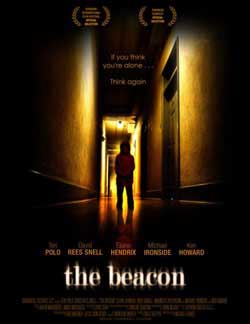 While trying to get their lives back on track after the loss of their four year old son, Bryn and Paul Shaw move to the charming old Beacon Apartments. Bryn begins seeing a ghostly little boy skulking around the building. With the help of an eccentric young professor and a tough old beat cop, Bryn tries to uncover the details of the boy’s death. She hopes that freeing the child will allow him to carry a message to her son. Too late she realizes a second malevolent entity stalks the halls of the Beacon: one that doesn’t want the boy to escape.

There have been a string of inventive and somewhat scary ghost stories hitting screens for several years now, some were good and some not so much, and they are still coming. It just seems like they are not scary or very inventive anymore. “The Haunting at the Beacon” at least makes the attempt at doing something different, it just takes too long to get there. By then, it really just doesn’t matter. Not a bad film by any means, this is something better suited for a day off or when you want to pass time waiting for something else better to come on. Bryn (Teri Polo) and Paul (David Rees Snell) are trying to get their lives back on track after the disappearance of their son three years ago.

Paul is settling into a new job and staying strong for Bryn who has had a bit of a breakdown following the tragedy they have lived through. They move to a new apartment complex and immediately Bryn begins to see a young boy who appears to be in need of help. It all appears to be in her head but she knows what she is seeing. She enlists the help of Paul’s colleague Simon (Jonny Cruz) who knows a bit about the supernatural and the only one who believes her. He may have led her in the wrong direction after her sister Christina (Marnette Patterson) is mysteriously left hurt and they all must come together in order to uncover the secret of the Beacon.

When a films story is so generic, only one thing came really
save it and make it somewhat enjoyable and that is the films lead. Teri Polo does a terrific job here and her performance alone is worth a view if you’re a fan.

The rest of the cast is passable but the film only works at all because she holds it together with a believable strong portrayal of a woman who is shattered and lost just trying desperately to piece her life together after her son disappears. It was and always is a pleasure to see Michael Ironside, even if it was only in a small role. This film also, in its final moments, has several twists that I never saw coming.

What I really had problems with was the fact that all of the films early scares have been seen before, lifted from other films, and just never worked. I didn’t care for the ghostly appearance and was disappointed that the scares were so generic and obviously inspired, at least a bit, by “The Grudge” films or any other numerous ghost story that was remade from a far superior foreign film. I did appreciate the fact that most, if not all, of the scares were attempted in camera. No CGI or anything like that as well as some nice prosthetic work near the end of the film. No much blood or gore and really a lack of suspense. There are several subplots that jumbled up the main story and just didn’t really seem to tie together as well as others.

“The Beacon” is worthy of a view. I can whine and complain about it all day but there are things many of you may enjoy. If you’re a Teri Polo fan then you will not want to miss her performance here. She is rock solid and give her kudos for pouring her heart into the character and deserves to be recognized for it.

The films’ final act strays from formula of the rest of the film and the twist ending worked. It was the rest of the film that, it worked, it just wasn’t anything new or we hadn’t seen before. This isn’t something I would rush out to see or even rent, but if I saw it was coming on and there was nothing better to watch, you could do a helluva lot worse than “The Beacon. It’s not great, but not too bad either.