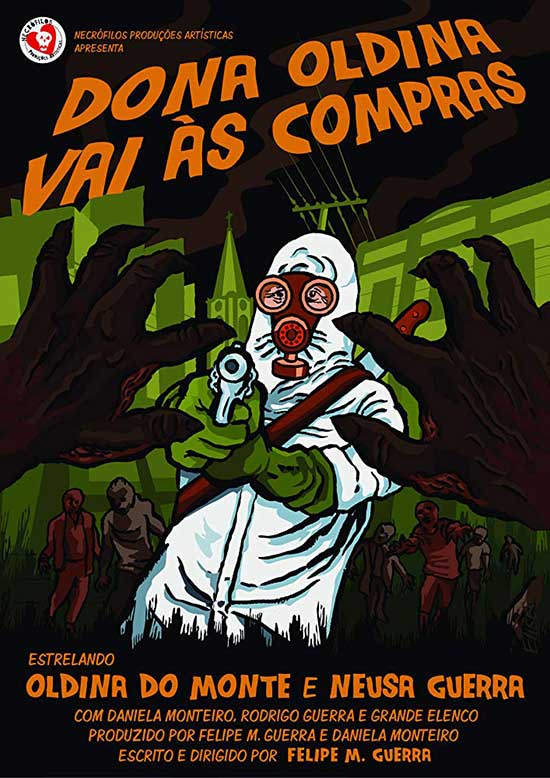 Mrs. Oldina must leave her house to buy some eggs. But the world out there is no longer as it used to be.

The indie horror scene of Brazil resembles the DIY punk scene in a number of ways. The films are no holds barred, low budget, and in your face. The blood and guts are often times over the top with a darkly humorous edge. These movies aren’t afraid to show a little (aka a lot) of skin and shatter taboo after taboo, and while they don’t take themselves too seriously, the filmmakers consistently deliver quality to their audiences. There’s an old school of filmmakers who’ve paved the way – “Coffin Joe” Jose Mojica Marins, Ivan Cardoso, Fausi Manzur, etc – and then there’s the “new kids” who’ve been making quite a bit of noise as of late. Filmmakers like Petter Baiestorf, Gurcius Gewdner, Rodrigo Aragao, and Larissa Anzoategui, just to name a fraction of them. Felipe M. Guerra falls into that list of new kids, and he’s been just as busy as the others, putting together both documentary films (FantastiCozzi about filmmaker Luigi Cozzi, Deodato Holocaust about Ruggero Deodato, and the upcoming Fantastic Women focusing of some of the awesome ladies in horror and the movies they’re making) as well as short horror films of his own (The Augusta Street Ripper, Bring Me the Head of Antonio Mayans). His most recent short film is Mrs. Oldina Goes Shopping (or Dona Oldina Vai as Compras), and it’s a great example of the work that’s been coming out of our South American neighbor.

Mrs. Oldina Goes Shopping starts quite simply with our title character, Mrs. Oldina (Oldina Cerutti Do Monte), putting on an old VHS tape full of cooking shows she had recorded off TV. As she begins gathering the necessary ingredients listed by the show’s host, she realizes that she does not have enough eggs. She lets her husband (played by Rodrigo Guerra) know she has to run to the store, then puts on her HazMat suit (at which point Mrs. Oldina is played by Neusa Guerra) and makes sure her gun is loaded before heading out – the typical routine of preparing to face the grocery store. It is immediately quite clear that some kind of horrible event has taken place: the streets are vacant, the neighborhood is run down, and the grocery store is trashed, its shelves ransacked and mostly empty. Thankfully, there are some eggs, and she is able to head home victorious. But when she accidentally sets off a car alarm, we realize the magnitude of the situation and find out just which type of post-apocalyptic wasteland we’re living in when Mrs. Oldina finds herself surrounded by an infected mob.

With Mrs. Oldina Goes Shopping, Felipe M. Guerra proves quite a bit as a filmmaker. He clearly has a love for the genre, evidenced not only by his documentary film work, but also in how he pieces together this short love letter (about nine minutes long) to the zombie subgenre. This is a film that is funny, not in a parody/Scary Movie way, but genuinely, reverently, adding humor when appropriate, much like an early Peter Jackson film (specifically Bad Taste and Dead Alive). This story also takes one of the smallest of life’s tasks – getting eggs from the store – and sets it in the middle of a horde of flesh-starved crazies, then gives us a new undead-killing character: an elderly woman. Two thumbs up for originality alone. The blood and gore effects are fun and nasty, thanks to the team of Maria Isabelle Ghiorzi, Ricardo Ghiorzi, Daniela Monteiro, and Guerra. Actually, Guerra did a little of everything: writer, director, co-producer, cinematographer, co-editor, art co-director, sound…pretty much the only role he didn’t fill was that of actor.

Mrs. Oldina Goes Shopping has been on the film festival circuit for a bit now, but once it’s available for public consumption, I can’t recommend it highly enough. It reminds me a bit of both Henrik Andersen’s Udbrud (Denmark) and Julien De Volte & Arnaud Tabarly’s Les Fines Bouches (France), two short films that have similar vibes in that they are gory and brutal but also fun at the same time. Guerra’s film, much like these two, also delivers with an unforgettable finale, one that manages to shock at the same time as provoke genuine laughter. Yet another great film from another great young filmmaker out of Brazil; this is starting to become much more than just a trend.