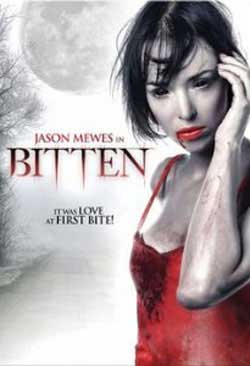 Jack is a young man with a lot of problems. He works as a paramedic during the graveyard shift so he really doesn’t have that many friends; in fact his only friend is his coworker Roger who seems to only want to talk about things going in and out of asses. Things really start to get bad for Jack when his girlfriend Sherry leaves him for her yoga instructor. Things start to look up for Jack however once he meets the beautiful Danika, it’s just really too bad that he found her bleeding in a pile of trash.

With a title like Bitten one already knows that they are in store for a vampire movie, actually most genre fans have been waiting for this little treasure to finally be released so we already knew it was a vampire film. Harvey Glazer takes advantage of this by having the opening scene of Bitten actually fool its viewers, at least for a minute.
It doesn’t take Glazer long to introduce his two main characters in Jack and Roger. Jack and Roger are paramedics who work the graveyard shift in a seedy side of town, most of their evenings are spent reviving junkies or cleaning up bullet wounds. Jason Mewes portrays Jack and instantly he does exactly what most of you think he is going to do, however the character Jack is actually very likeable and Mewes does do the part justice.

In the opening scenes of the film Jack is explaining to Roger that Shelly has left him, Roger of course doesn’t think this is a bad thing and informs the young Jack that he will eventually find another woman (Roger has been married several times therefore he is an expert at matters of the heart!). Jacks life at work is chaotic and messy but his life outside of work is just depressing. He gets into a fight with a convenience store owner, because he accidentally gets blood on a freshly mopped floor, he hasn’t paid his rent to his landlady because she has yet to hire a plumber (both the roles of the convenience store clerk and the landlady are very racially stereotyped, but still amusing). It seems Jack spends most of his evenings alone falling asleep in his easy chair with the television on to drown out any outside static.

Soon enough though Jack realizes that Roger is right when he suddenly meets a new girl, or rather he finds a new girl. While coming home from work Jack looks over and sees a young girl bleeding buried in a stack of trash on the side of the street. Jack quickly brings her home and starts to clean her up, after she is cleaned up Jack learns that her name is Danika and that she has no ties to any other person. Jack even uses his pull as an EMT to try to track down missing persons report or anything to find out who she is. Jack leaves her at his place when he goes into work and tells Roger about what he has found, Roger is convinced she is a junkie and he should just put her back out on the street.

Roger’s statements might be true however because when Jack gets home he finds that Danika is almost strung out, he even brings Roger over to help evaluate her which only causes Roger to think she is a junkie even more although he does think she is a pretty hot junkie.

It isn’t until the next day that Jack finally realizes just what kind of fix Danika needs after Danika kills Sherry and drains her of her blood, in a pretty funny sequence actually which mostly is Jack spewing a lot of cuss words. So Jack’s new girl is a vampire that can’t be all that bad can it?

Honestly I am not much of a fan of the vampire film; I find most of the films to be slow and really stuck on themselves. Harvey Glazer’s Bitten is hardly that, it is a very fun film with a lot of subliminal messages about dealing with having a relationship with someone who has an addiction. The characters are all likeable, even Roger who seems to only talk about how many dumps he takes a day and “the shocker” (I am not going to explain what this is if you don’t already know).

Jack of course is very likeable as he tries to do anything for Danika to make her withdrawal symptoms go away, he tries to kill a cat and he even steals a bag of blood from work but to no avail Danika only can survive on fresh blood taken from fresh victims. There are some pretty funny scenes involving a lot of the victims that Jack finds for Danika (two of which are drug dealers who hang out right outside of Jack’s apartment). After Danika kills each one Jack cleans up the mess (most of the time a children’s song that sounds remarkably like Barney the dinosaur comes on a plays during these scenes) and he finds out rather quickly that someone who is killed by Danika also comes back as another vampire; there is a very funny scene involving Sherry when she comes back as one of the undead which turns into a dare I say cute scene as Jack and Danika bounce on top of the trunk holding the bodies of the vampires victims in order to latch the lid down.

Glazer however doesn’t keep it cute and sweet for very long, it’s only a matter of time before Jack learns that Danika’s thirst is only going to keep coming back and it’s only after a very sexy scene that he learns that has to get rid of her. Like I said up there a few paragraphs ago the film works as a metaphor of having a relationship with someone who has an addiction and how the said addiction eventually does start to wear both members of the relationship down.

Bitten has its tongue planted firmly in its cheek however by the time the credits come around and the viewer is treated to a blooper real of material….it is important however to keep watching after this because Harvey Glazer has a treat planned for those who sit through his credits.

Gore fans are going to love all of the red stuff that constantly is flying around the screen and Bitten almost even comes off as dare I say it….a date movie….recommended highly! 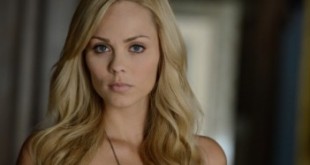 We Get Our First Look At BITTEN 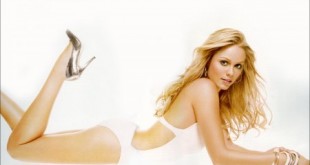 SYFY Channel Is BITTEN By A New Series