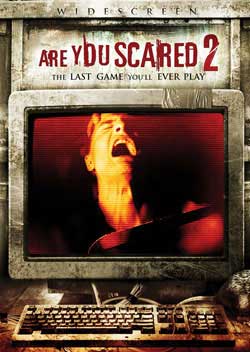 Four geocaching gamers’ search for treasure turns into a deadly game of survival as they become unwilling participants in a twisted reality show webcast hosted by a demented and relentless game master. With no GPS to lead them to safety, they must find a way out of a death trap rigged with cameras that track their every move. Tony Todd, Adam Busch, Andrea Monier and Laura Buckles star in this terrifying thriller.

“Are You Scared 2” is the latest release from Lionsgate carrying over from “Are you Scared” original release. If your mind is sketchy then “Are you Scared” (the first one) was an attempt to cap in on the SAW franchise by basically repeating the formula with new players, new agenda and few differences for good measure. AYS 2 is not that movie. In research, I discovered that the film was actually bought by Lionsgate and repackaged under the AYS moniker. The original title being “Geohunt”.

Now in searching on the film I was able to find this info on its original title “GeoHunt”. The following actually explains what the hell this game is and in turn paints a clearer picture on what the film is about. Read on:

BATON ROUGE, LA—Cutting-edge camera technology and independent filmmaking are coming together in Baton Rouge for a low-budget horror film starring Kathy Gardiner who was named a winner in Maxim’s Hometown Hotties contest and Andrea Monier of the 2006 Lingerie Bowl. GeoHunt, an original story based on the newly popular GPS game, Geocaching, will begin filming April 16 through local production company, Louisiana Media Services. At the helm of the project is California-based Fade to Black Films ( www.fadetoblackfilms.net) bringing on young director John Land of Chico, CA who recently finished second unit directing Brain Dead with seasoned horror director Kevin Tenney. “The opportunity to do a horror film about new GPS systems while using state-of-the-art, high definition technology here in a state like Louisiana where the film industry is really beginning to flourish feels like the best possible way to make a project like GeoHunt ,” says Land of his project. GeoHunt will be filmed using an almost entirely local crew at the abandoned King’s Hotel in downtown Baton Rouge, LA where Huey P. Long once spent much of his free time during his tenure as Governor and at the Global Wildlife Center in Robert, LA. GeoHunt is set in the world of Geocaching ( www.geocaching.com), a fast-growing community of adventure-seekers who play hide-and-seek around the globe using GPS devices and clues and coordinates posted on the website. In 2000, with advances in GPS technology, Geocaching began with a simple idea: hide a container out in the woods and note the coordinates with a GPS unit. Anyone can join in the game and search for caches in their area or in a far-flung corner of the world. In the movie, four twenty-somethings, who are in a game of Geocaching, fall for a trap set by a killer who chooses them for their notoriety on websites such as YouTube. The treasure-hunters become the hunted, and thrill-seeking turns to survival as their adventure is broadcast on the web by the killer in a twisted reality show.

Now this bit of info was important to me as starting the film I had no idea what was going on, what game they were playing, the object, or any clue to grab hold of. The only thing I got was that it was a webisode in progress and somewhere Tony Todd was luring victims to his lair to torture them??? I’ll tell you it took me 2 attempts to get the gist. Alot of the film was filmed in the ol back and forth to live video cam shots with didn’t help matters in further understanding. So as a public servant I thought I’d bring ya up to speed so you can experience the movie with some understanding. I’m guessing if I’m not hip to “Geocaching” then I won’t be the only one in the dark.

Now that your equipped with the premise and educated a bit, lets talk about the film. Its’ become a trend to combine multiple shot technology and film styles with the narrative. Since this is the basis of the film, it is required, though it does tire after a bit. Tony Todd is an odd fellow, who watches his “SAW” monitors and plays with his turtle through 100% of the film. Within his lair his lackey rapes, tortures and murders victims on screen. Yes, they are intense and they are violent but are short and nothing you haven’t seen. Todd’s performance in this film is laughable. I like Todd, though in this film he mumbles in “every” scene of which I didn’t have subtitles to read…so his performance was basically lost. I’m not sure what direction he was given or if he was just on meds..but bad move taking this film on. This is now the 2nd film I’ve seen him not leave his location once in recent. I’m wondering if he’s suffering from some sort of handicap. Not being sarcastic, but being sincere.

To round up the plot. The idea is that Tony Todd and his henchmen are playing the players. They have set up a game where they kill on screen for broadcast and for high dollars. The location is this old warehouse looking building. The players have to try and escape before getting killed.

That’s all I’m giving away because the rest is crap. Acting is bad, they have giraffes running around into the background (ya I know…pretty odd), the plot has many holes including several locations that look easy enough to escape if they chose to, the henchmen are lame and there roles are annoying…….so what more is there to say?? Nothing except some final words and off to watch something else.

Review? – Well off the top Lionsgate gets points off for slamming the viewers with a technology that most know nothing about. Coordinates appear along the bottom of the screen which at first I though was a DVD error. I know the philosophy that alot of viewers don’t like being spoon fed, but a decent intro into he game they are playing would have made this ride alot smoother. I really hate a film that I’m lost though the first 2/3 of the film.

I know you should always try to find some good qualities in low budget films, but today I have to say I came up with none. This film was the worst. In fact I spent more time watching the DVD timer hoping it would finish so I could move on. Really folks, I like alot of films and this one was a complete waste of time. Don’t rent, don’t buy and most of all don’t read any more reviews on this film.

Tags Are you Scared 2