What is your earliest memories of being a horror fan?

Well, first off; great question, but I would have to say Wes Craven’s Wishmaster from 1997. I love the writing in it and it is such a terrifying, but a totally original piece that breaks away from the standard mold of scary killer or a monster that isn’t exactly a creative creation. The heroine in it really had to come up with the most clever wish in order to keep the djinn away from killing more victims.

Was there a moment in your life when you knew that filmmaking was your calling?

In 2002, when I first started creating horror videos with a consumer level VHS-C camcorder. I guess that’s how the journey starts with many of us, but its when you truly believe you have some successful acting moments or cool shots set up for the first time, is when the journey does not become abandoned, but it ever goes on its way into the future.

What is your favorite decade of cinema and why?

The 2010’s, in my opinion, have lacked originality and substance, so I must say the 2000’s is the best. Computer animation brought stories to life to great heights in ways where the 90’s was only just knocking on the door.

Tell us a bit about Mr. Blue Shirt?

Mr. Blue Shirt: The Inspiration is my film and I wrote it to be an ode to the great sci-fi, fantasy, and horror movies from yesteryear. It truly is a mix of so many movies, but still holds its originality pride. Its about an evil god who has the power to write stories that become born into reality and the creations just happen to land on Earth. The ruler of Earth, Azarene, does not take to well to this invasion…and well the conflicts of peace in the Universe begin with the interaction of multiple galactic parties.

What inspired you to tell this story?

I am just inspired by films of all kinds in general. I think I was inspired to make something very out of this world and one of a kind and I have indeed always been in deep thought about life and death and the great unknown that is the afterlife. One may say this is a mix of Lord of the Rings, Star Wars, The Matrix, The Neverending Story and Phantasm and you may be right, but its still so much more inside of this beast recipe. 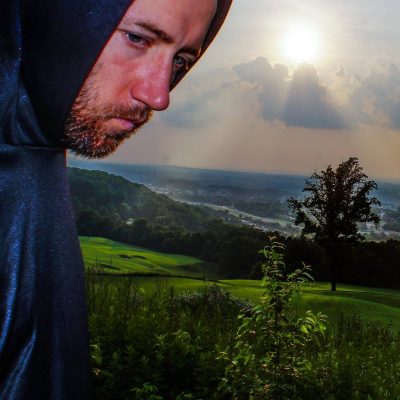 What is the most difficult part of the filmmaking process?

Being the producer, director, main actor, writer, and editor while working this full-time warehouse job with not enough money to proceed at a more faster desirable rate. Kids, don’t try this style at home! The most difficult part I think is keeping the ship sailing in strong fashion when the waters get a little rough.

If you could give another filmmaker the most valuable lesson that you ever learned while on set, what would it be?

Quarterbacks and film directors have much in common. I would say patience in the pocket. (just like a QB) Things may not go exactly as originally planned, but don’t stumble and make a bone headed pass that will cost your team the game. Think smart and be innovative to make a play on the fly when the time calls upon you to do just that.

Independent filmmaking is a difficult thing to follow. What’s your motivation?

I want to be great and this project is my baby. I know with all my heart that this movie is going to be so awesome, so I am totally reckless and do whatever I have to do to get fired up about it. Whether its go run for a quick 10 mile run or down loads of caffeine; I’m about the preparation aspect of motivation.

Can you tell us what other projects you are currently working on?

Mr. Blue Shirt is so intense and grand, that I really do not have time to be a part of other projects and most certainly not able to attempt to produce or direct other projects. I am able to act in some other projects, but even that is tough at this time. During the writing process of Mr. Blue Shirt; I knew the challenges that would one day come in the production process since I knew I was going to be the director of it. I am going to be writing this project that is definitely going to be a 100M+ film on the afterlife. I have been dreaming up some ideas and pre-visualizations of it up in my head. That has been about the only other project that I have been working on at this time.

Where do you see your career in 5 years?

In a perfect setting, I would be directing a high budget adaptation of Philip Jose Farmer’s awesome scifi novel “To Your Scattered Bodies Go,” starring Denzel Washington and Ralph Fiennes. How would you not want to see that??? The Riverworld book series is very instrumental to Mr. Blue Shirt, not to mention that it is totally awesome ground-breaking and imaginative material! Sure, there was the Sci-Fi Channel premiere adaptations, but I feel as if it got the higher budget treatment; it would be way more exciting.