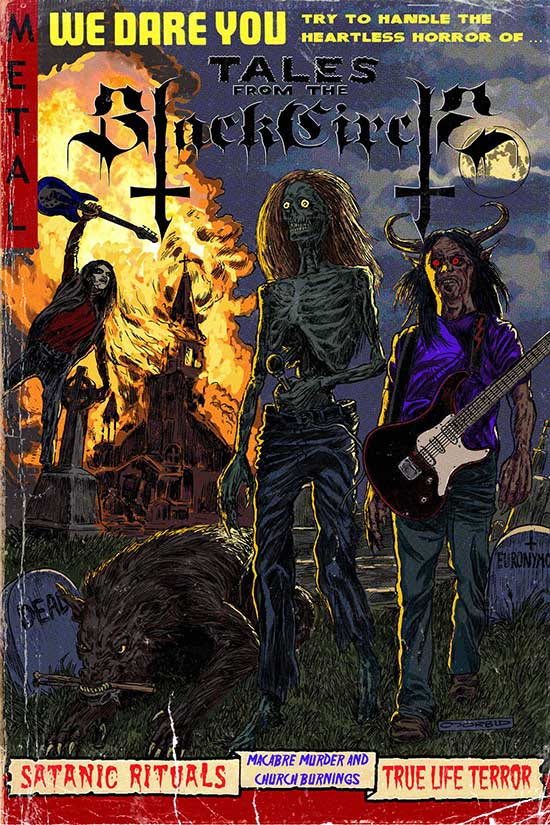 TALES FROM THE BLACK CIRCLE

I vaguely remember a news feature about a spate of church burnings in Norway linked to a new, underground music scene dubbed ‘Black Metal’. The newsreader recounted the events with the typical disdain I’d come to expect as a fifteen year old used to seeing people look down their noses at me and mine. Understanding and consideration were not part of the establishment practice when it came to reporting this new, askew facet of youth culture. This was 1993, and while desecrating houses of worship and crucifying rodents wasn’t my bag, it was oddly relatable. It was the Seattle music scene that I sold my soul to, so empathising with young men and women who found a sense of belonging in screaming vocals and livid guitar riffs wasn’t hard. But sadly, much liked my beloved grunge, Black Metal would reach its crescendo amid a frenzy of self-destruction and ultimately, death. The story of this hugely innovative but disturbed music scene has been widely covered in some excellent documentaries, but now it’s a full colour, 72 page comic. And it is a killer.

Written by Sam Hart with art by the aptly dubbed Trevor ‘Morbid’ Markwart, the book chronicles the Norwegian Black Metal scene primarily from the viewpoint of the band Mayhem. There are various key figures in this story but the main focus is on the personas of guitarist Euronymous and bassist Count Grishnackh, and the macabre events that unfold between them. The book itself is presented in the style of an EC Comics classic like Tales From The Crypt, with the story broken up into chapters that serve as cautionary horror tales in and of themselves. Each one is presented by a demented host who comes with the obligatory lurid moniker and perfectly tasteless quips. In between each story is an equally tasteless but brilliantly rendered advert for things such as the Black Metal colouring book with free black pen and the Black Circle hotline. 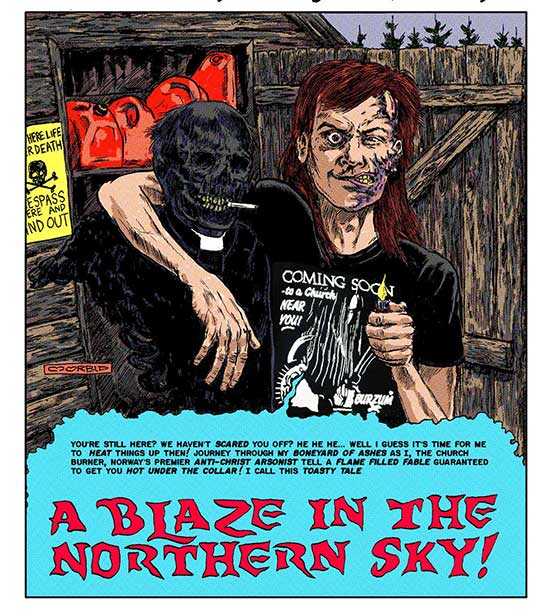 If this all sounds somewhat irreverent for a story chronicling one of the darkest chapters in rock music history then that’s, in many ways, because it is. But that doesn’t mean the book is disingenuous; far from it. Much of the dialogue and character exchanges are taken from actual interviews and transcriptions with the key players. If you watch any of the documentaries on the subject, you’ll see that the musicians take themselves incredibly seriously, yet do some outrageously stupid, unfathomably bad things to one another. And whether that is in the name of Satanic worship, a response to a turgid society that doesn’t care, or because these people are just mentally ill, the consequences are both preposterous and utterly awful. So structuring the book in an off kilter style that warps the content into something fitting a 1950’s horror comic is actually a bold and quite brilliant move. Hart’s dialogue fits the ‘good Lord… choke!’ stylings of an EC book, but cleverly uses bits and pieces of Norwegian to continually remind us where we are in the world and that these are real things that happened to real people, too many of whom are no longer. The art by ‘Morbid’ Markwart is a pleasure to behold, with character expressions, both dark and delirious, channelling the pencils of EC greats Jack Davis and Al Williamson. There are whole panels you’d happily plaster all over your walls. 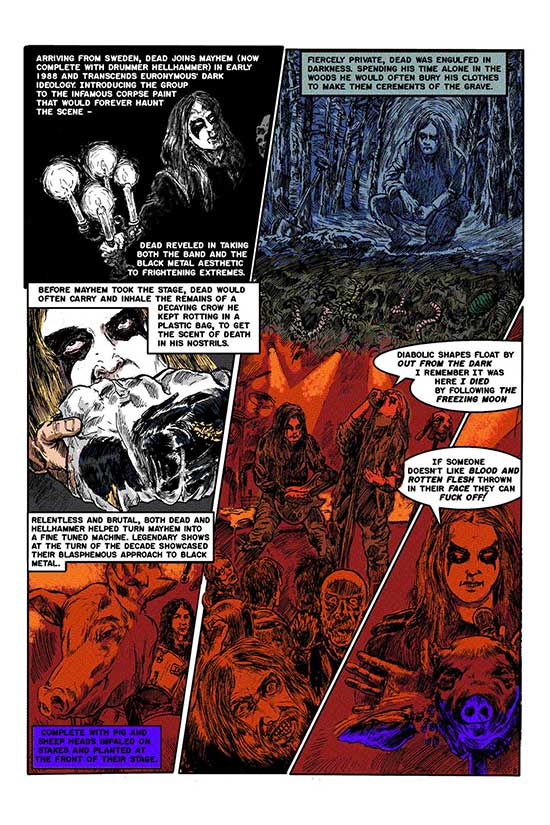 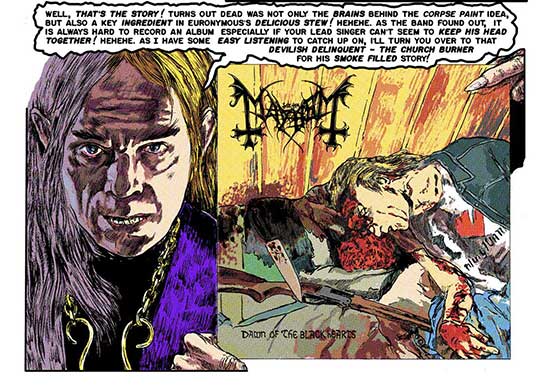 The creators of this book have gone to studious lengths to represent the story of Black Metal, so one has to assume they are fans of the genre. They’ve even crafted an instrumental soundtrack complete with Texas Chainsaw Massacre style intro as an accompaniment. All that said, if they aren’t die-hard fans then it does no disservice to their book as this is very much a story worth telling. It’s not for the faint of heart, and if you aren’t in some way shocked by it then you might want to put some time aside to consider why. TALES FROM THE BLACK CIRCLE took me back to my musical and comic reading youth in both the best and the worst way. The cover even dares you to ‘handle the heartless horror’. When you consider the violence inherent to the history of Black Metal, it is no small feat that a stylised comic can be so impactful. True life terror at it’s finest, kiddies.

Tags Tales From The Black Circle