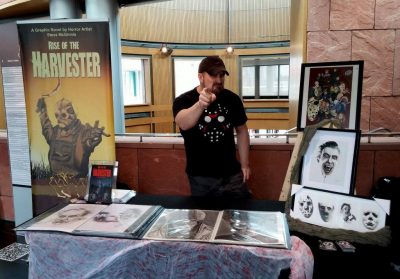 Following the success and cult following of Artist Steve McGinnis range of horror art (www.steveillustration.com/), he continues the macabre madness with the follow up to the 2016 graphic novel Rise of the Harvester: Book One. In book one, we are introduced to young boy sitting on a farm with evil just under the skin. We see the growth and development of the child monster known as Samuel Troyer  aka “The Harvester” murder all he knew. As the origins story developed, we meet who would become the murdering menace known as the hulking “Harvester.” Leaving the story at a dark in pass in book one, this year McGinnis brought us the follow up entitled Rise of the Harvester Book 2: Con of the Dead which takes the story of mass murder to a new arena that fits this undead character so bloody well. Distributed by SST (Short, Scary Tales Publications) out of England, McGinnis continues the signature style of storytelling as well as sharp, artistic expression that not only has made him a cult favorite north of the border but has established “The Harvester” as a developing horror character that has a flair of originality rooted in modern day horror troupes and yet satisfies horror fans with homages to classic films from the 1970’s and 1980’s. 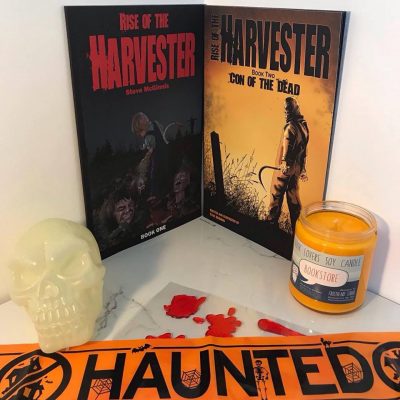 Picking up the story as “The Harvester” is plastered on the front of speeding train, we can’t turn away from this 60-page read that holds you like a car accident unfolding. With each turn of the page, each killing becoming more primal, brutal and detailed. Known for some incredible deaths via sickle not to mention by his bare hands that started in the first book, McGinnis unleashes the beast and proves nobody is safe in the world that has expanded for Samuel. Giving “The Harvester” a Michael Myers style demeanor and core evil, McGinnis is fearless. As the body count goes up, so does the level of uber-violence with “The Harvester” following his Children of the Corn style inner demon to garner victims, (I mean playmates) to join them in hell. Moving through one murder to the next, we wait to see what the ultimate end game and location will be. Using a long shot style illustration to reveal the slaughterhouse for Samuel, it is a sweet reward for the reader.

Why I do think the body count may be a bit excessive leading to the final event, McGinnis makes each murder more over the top and brutal, a recipe for horror success. Ending up at the horror/comic convention, McGinnis creates a smart turn for the story by not letting his lead monster be an unknown menace but using the tool of flashback to an effective level. Having his origins explained from an obsessed and overweight fan cosplaying “The Harvester” is a great touch that is not only is a commentary of the con culture but allows Samuel to enter nearly undetected but yet critiqued by the masses at the con. Think how Jason was able to walk around in New York City in Friday the 13th Part VIII – Jason Takes Manhattan. 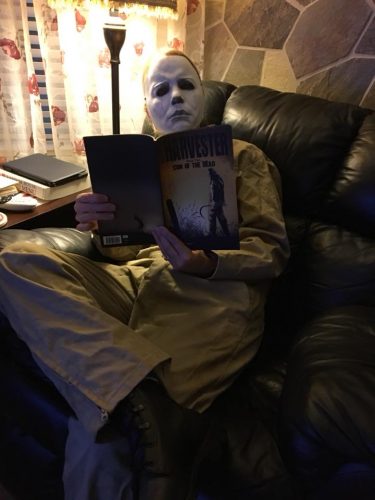 It’s moments like Samuel’s origins flashback as told by the cosplayer, where the reactions of the attending crowd and self-reflective ego of these fans add an infusion of  true to life con humor that breaks up the unrelenting splatter. As I read, I would laugh because I have seen this (minus the mass murder) play out at conventions with horror fans that take it a bit too far to emulate their heroes and rouges. As “The Harvester” walks through the crowd mowing down, slicing and tearing apart each person who comes into his path, McGinnis again is fearless having his monster butcher the son of the con organizer. This act, which is provoked a bit by entitlement attitude, is both painful and insane even for an illustration as the detail feels a bit too real. McGinnis’s style creates such emotion in the lining of the various faces that it really catches you off guard with each frame standing on its own as well as being crucial to the overall story. Pick up a copy right now at sstpublications.co.uk/Rise-of-the-Harvester-Book-Two.html as well as look for hopefully the next chapter in 2018 with the end of Rise of the Harvester Book 2: Con of the Dead leaving the authorities hunting down Samuel and his body count continuing to grow.