Tales of Voodoo – The 1970’s Comics that Scared My Mind

Recently my niece uncovered covert actions within her own household. Apparently my seven-year-old nephew had devised and executed a complex plan to watch The Walking Dead– a show that was deemed strictly off limits. Yet he’d managed to set an alarm for three in the morning, sneak out of bed, navigate Comcast’s Video On Demand feature and watch half an episode with the volume turned down to a level only cats and toddlers can hear. He was caught red-handed, but I have to give him credit for being sly and operating media devices that even I struggle with. Seeing half an episode of The Walking Dead gave him a week of nightmares, coupled with a burning desire to watch more.

His intricate plan to see (in his words) “some really gross zombies,” brought back fond memories of my own childhood- but not normal pre pubescent stuff like fishing or playing baseball. Specifically I recall some very taboo comic books published in the early seventies by an outfit called Eerie Publications. These comics with titles like Tales Of Voodoo, Tales From the Tomb and Witches Tales were oversized magazine style comics, designed to compete with the higher quality Warren publications titles like Creepy and Vampirella, which, on the literary scale were like War and Peace in comparison. But the problem with Creepy and Vampirella was that they cost an astronomical seventy-five cents a copy- an unfathomable sum on an eight-year-old’s allowance. By comparison Tales of Voodoo was only thirty-five cents, placing it within the realm of possibility. Best of all they had covers that were plucked straight out of my nightmares. 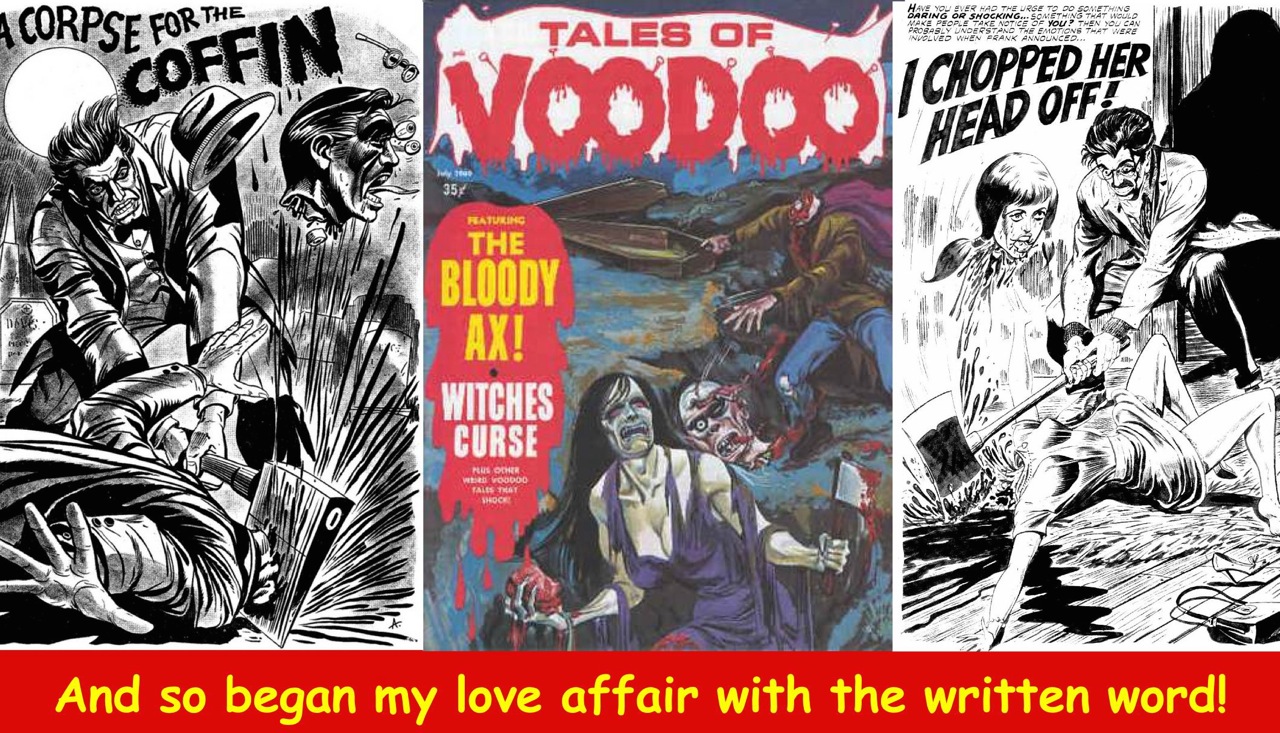 The covers of these later day pulps were their only memorable feature- but what a feature they were!  Garish, gruesome, misogynistic – everything your mother ever warned you about, in gorgeous full color. From the moment I saw them I knew they were all I ever wanted in a comic book.

Remember, this was long before Graphic Novels started using the comic medium for more adult subject matter. At the time the closest affordable thing to Tales Of Voodoo were Marvel and DC’s yawn inducing House of Secrets and Where Monsters Dwell titles. The Eerie Publications titles were a different breed of cat, and I vividly remember being afraid to pick up the magazine. The first cover I saw featured a decapitated zombie throwing his own head at a blinded ghoul woman clutching a bloody hatchet – in short it was the coolest thing ever!

Overcoming my fear I begged my mother to advance me the thirty-five cents I needed to buy Tales of Voodoo, while slyly holding up a copy of Mad Magazine. My mother relented and I thank her to this day. Had it not been for Tales of Voodoo my entire life would have changed and today I might, god forbid, actually be living up to the potential my guidance councilors always claimed I had. 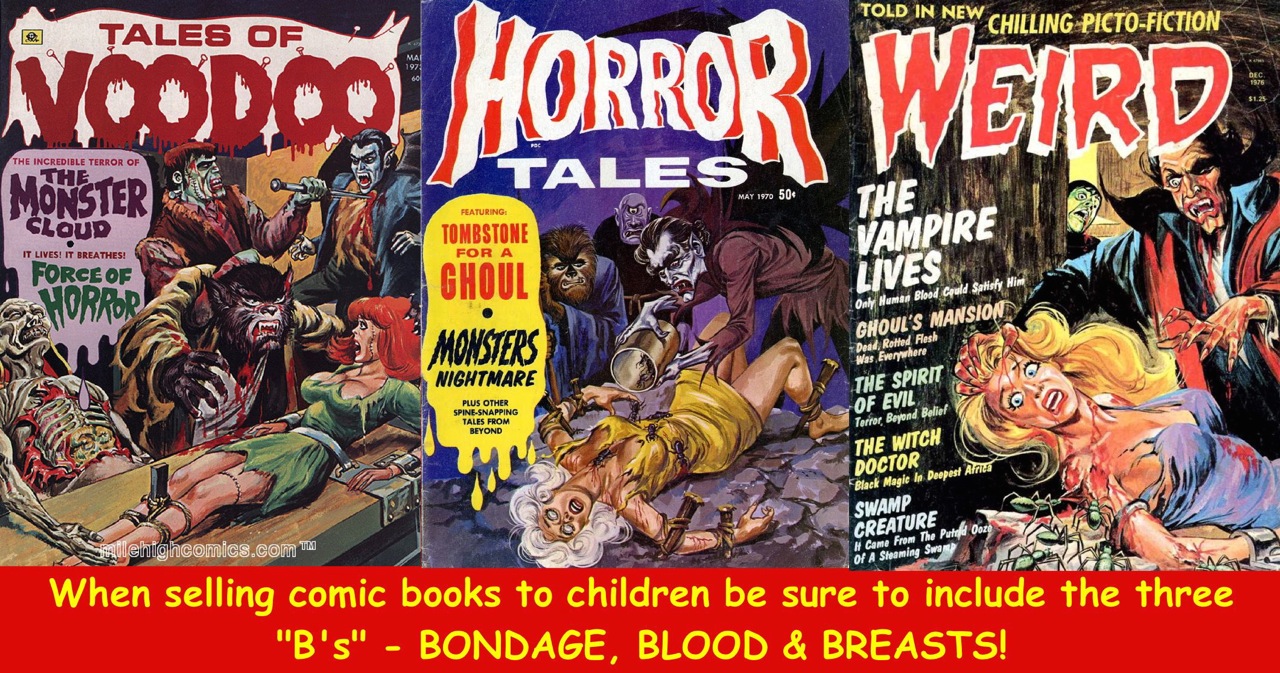 I hid this treasure under the back seat of the family Rambler, knowing that if my parents saw the cover it would instantly be dumped in the trash.  Truthfully, the comic scared me so much I was afraid to read it alone.  So, weeks later I sat with a friend and we flipped wide-eyed through every blood-drenched page.  Being so young I had no idea whether the stories were actually any good (I recently discovered some reprints – wow, they’re terrible) but for that one moment in my life something actually exceeded my expectations. That didn’t happen again until my first James Bond movie Diamonds Are Forever, which in retrospect isn’t that great either. Unlike normal comic books these were in black and white, which seemed very grown up and daring, reminding me of my dads Men’s Adventure magazines, which had probably employed some of the same artists and writers.

Comic book enthusiasts have compared these ghoulish treats to the old 1950’s classic EC Comic books, such as Tales From the Crypt and they’re correct.  In fact these 1970’s comics were reprints of 1950’s pre comics code titles that competed with the legendary EC titles. Originally these poor man’s EC comics were published by the likes of Ajax Comics and Atlas Comics where lesser known artists and writers toiled for low pay.  In the 1950’s these horror comics were a huge success, until Dr Fredric Wertham published his book Seduction of the Innocent, which convinced parents that exposure to horror and crime comics would turn their children into murderous juvenile delinquents. 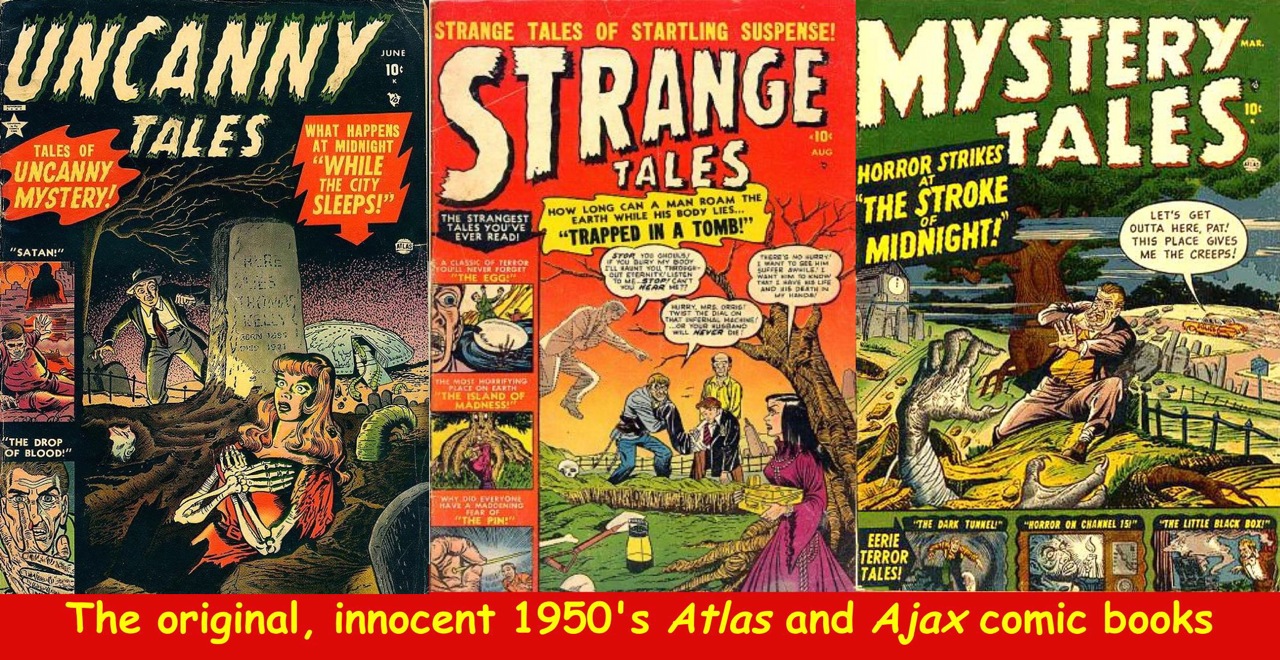 Shortly after Dr Wertham’s well-intentioned witch-hunt horror titles vanished from the racks, and a self-censorship system called the Comics Code came into being.  EC Comics, publisher of the Original Tales From the Crypt only survived because their non-horror title Mad Magazine became popular, subsequently switching to an oversize magazine format to dodge the Comics Code. Smaller publishers like Ajax Comics closed their doors forever, and the republishing rights to their library of stories could probably be purchased for subway fair.

Twenty years later publisher Myron Fass bought the rights to these old titles. He slyly commissioned all new cover art, the likes of which had never been dared before and shamelessly foisted these reprints off on a whole new generation of impressionable young minds.

Some of the old artwork didn’t live up to Eerie Publications lofty standards in terms of sheer gore, so, at Foss’s direction, freelance artists simply inked in more blood and entrails to complete the recipe.  Never missing a trick the publishers would print the last page of the issue’s final story on the back cover of the comic, taking great pains to ensure it was the most gore soaked page in the magazine.  Readers would see the gruesome cover and the gory last page and instantly assume that everything in between lived up to those bloody standards.  It was pure carnie mentality.

Of course there was a limit to the amount of old material Eerie Publications could scavenge, so stories were repeated in their comics ad infinitum.  Personally I recall seeing The Slimy Snake Man and Witches Swamp in Tales of Voodoo and again in it’s sister publication Tales From the Tomb.  Likewise artists would rework the same cover compositions, changing the monsters faces, the tortured woman’s hair or dress color and maybe adding some spiders.  It was so blatant that even as an eight-year-old I became conscious of the repeats, and after two or three years my love for these titles faded.  I’m sure for every person who tired of these comics two more impressionable youths stumbled across them and became zealots. These titles were published until sometime around 1975, when the reprint well finally ran dry.

Myron Fass, the Publisher of these beloved comic atrocities also had great success with magazines like Official UFO wherein he uncovered all manner of elaborate conspiracies and alien invasions. The research for these exposes rarely extended as far as leaving the office or picking up a phone.  These non-fiction titles usually showed more literary imagination than his comic books.  After making a small fortune, Fass left publishing and opened a gun store somewhere in Florida.

I hope you enjoy these ghastly comic delights that twisted the minds of my generation. And remember that the man who created them could, at this very moment, be selling an assault rifle to one of his former readers who’s all grown up and suppressing a lot of rage.

While researching this article I discovered that Mike Howlett has published The Weird World of Eerie Publications: Comic Gore That Warped Millions of Young Minds. It’s a hugely entertaining book, packed with delightfully grisly artwork. And while you’re on Amazon don’t forget to grab my novel Voodoo Child, Book One: Zombie Uprising.