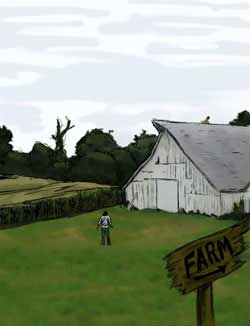 Charlie and his little brother Simon live a secluded life, feeding off of the land and surviving on their own. The monotony of their lives remains unchanged: day after day, month after month, yet, something keeps them from growing comfortable, from feeling safe. And all too soon, the nightmare brewing beneath the surface of their quiet farm life will erupt. For how can one survive the end of the world and expect their future to be bright? How can one expect there to be a future at all?

Farm, the Movie takes stab a the growing zombie trend with a small budget take that actually makes some of its competitors in the zombie field look weak in comparison. No, this is not so much about the gore, eating and extreme violence approach as others but still the same it offers a healthy blend that works well within the storyline and feel of the movie. The film was created on a shoestring budget by namely 3 horror fans who also share a love for the genre. The talent behind this piece are listed as Andy Gleason (Editor and all computer effects), Andrew Jackson (co-director), and Paul Farrell (writer) and director Hank Bausch. 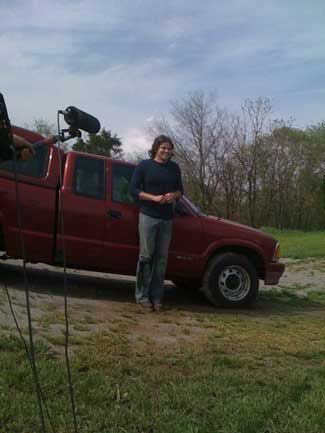 Now normally with smaller independent films you tend to give them the extra points for just creating a product without big studio help. Though I’m happy to say that these fellas don’t need the points, the film is actually quite good. To get some of the high points out of the way, the feature is beautifully composed by Nadine Gleason and sports some really great camera work by who I’m assuming from the credits is Nathan Ackerman (or otherwise unlisted). Though most surprising was the eye for direction in this film that frames the shots and composes the visual direction with a fine knack for movie dynamics. The kind that you’d figure was story boarded in advance. There’s no real way to know that but special kudus on the collection of shots. 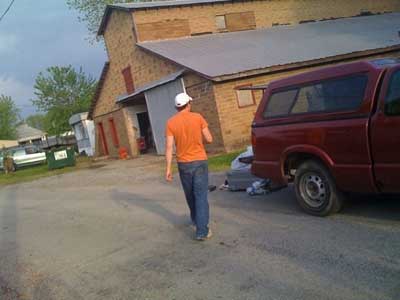 The film drenches itself in a sort of melancholy appeal that is enhanced with a score to match. 2 Brothers isolated on a Farm try and make due in a newly realized world of the living dead. As expected, no one really knows what set in it motion, just that it’s all about survival and less about looking back. A once full family is now down to the 2 brothers who reveal that they also had to kill off family members falling the way of those who turned. The farm is far enough away to generally avoid being a target for the walking dead, but its only a matter of time. The film stars Michael Hotop as Charlie and Freddie Meyer as Simon.

Simon now sports 1 arm due to the other being affected and having to be amputated off. He also seems to suffer form a half zombified face that only means that his time is limited. Charlie runs the show for the moment with a basic instinct for survival and an acceptance of the things as they are. When a girl comes knocking for help, they take her in to aid in their plans. Though the farm is growing more dangerous with more dead folks on the way. It seems that a road trip is undeniable to seek out help and new populations. 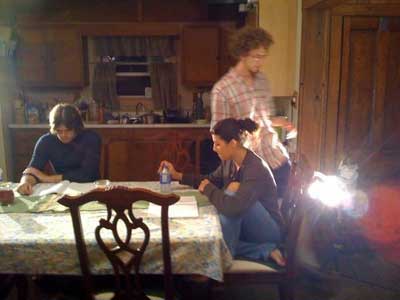 “Farm” has a few jump moments and appropriately featured zombies that excel above most independents I’ve seen. What works is the feeling of dread combined with a solid treatment of sadness that adds to the hopelessness aspect. The story builds on this as its main objective rather than heading into forum of action. For some reason I was reminded of the film “The Happening” in that sense.. maybe it was the secluded farm… I’m not sure. What counts here is that the product works for what the creators set out to do. I predict it will do well on the circuit even with the aspect of zombie over saturation. You can check out there site at farmthemovie.com. The film clock in at 73 minutes which seems just about the right length for it. This is a debut for many on board but a welcome one with a competent team that knows what they are doing. 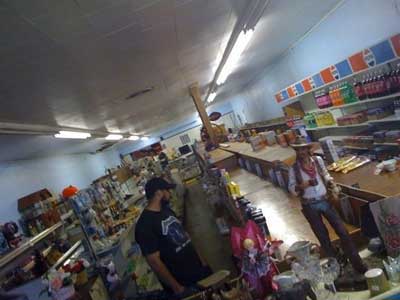