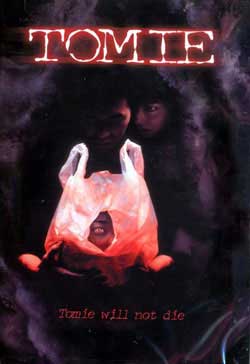 Tomie transfers to a new high school and her classmates are captivated by her beauty. But they soon realize that evil lurks behind her gorgeous face. Determined not to succumb, they kill her and deposit the pieces of her body in various locations. But Tomie can`t be stopped; she restores herself and continues on her malevolent path.

My mother always told me if you can’t say something nice, don’t say anything at all . This was one of THE most boring movies I’ve ever had to force myself to watch. Although not completely a loss with a few brief, mind you, BRIEF, moments of somewhat comic relief, a team of wild horses could not drag me into watching this movie ever again, not here, not in the afterlife, people I mean not ever! Days later, I’m still pissed at myself for watching this s#@*! This movie is what gives prequels and sequels the reputation from hell!

Tomie: An irresistible succubus with the power of limitless regeneration and tormenting terrified victims, sounds good, right? I though so too! Well, Junjo Ito’s popular manga was flushed down the toilet in this movie.

Under normal circumstances, I usually rehash a movie, giving readers a quick and easy walkthrough. But, this time, I cannot put myself through the rigors of this barrel full of hot stinking grand master monkey crap. So I am sorry my fellow Asian horror fans, this will be short and not so sweet. Tomie fans, be not offended.

The movie starts with real time boring dialogue between two of the students, Matsubara Reiko (Asami Imajuku) and Kenichi Yamamoto (Kenji Mizuhashi). Reiko and Kenichi are the only two people who show up for their high school reunion. Sitting in their former, and now abandoned homeroom, they begin discussing the hell that Tomie (Rio Matsumoto) unleashed in their school, which led classmates to suicide, mental wards, violence, or transfers to other schools. Even the teacher himself was admitted into an insane asylum. Personal note, I anxiously anticipated this “hell” that was supposed to break loose and at the end of the movie, I was still waiting. I guess that meant hell was sitting through the entire movie, which I did, so….um….thanks.

The remainder of the movie is told through the eyes of Reiko, who was chosen by Tomie to be her BFF, although Reiko isn’t aware of this until later.

Tomie arrives at her new school and instantly sends the boys into a mindless obsession and the girls into insecure jealous fits. She IS stealing their boyfriends by the way. Tomie is so mesmerizing that her evil beauty is too much for the boys to resist. Her only defender and supporter is Reiko.

Boys and girls alike are driven into madness, where eventually, at the direction of their teacher, dismember Tomie. The teacher decides this should be a -we’re all in this together -type of mutilation. So, in a scene depicted as an anatomy class sitting around a campfire, each student cheerfully takes a specific part of Tomie, for instance- “look I have the lungs, looks like she didn’t smoke” and “I have the stomach, looks like she had tea or milk for lunch.” After cheerfully playing show and tell with Tomie’s body parts, they are directed to bury them in various locations so she cannot regenerate. All I can say is that it doesn’t work, and the next day, you guessed it, there’s Tomie, whole again and all smiles.

Don’t get me wrong, the acting wasn’t too awfully bad, I’ve seen worse. It was the lack of story and the portrayal of Tomie that sucked. I actually like the character, Tomie. But this movie could have been much better if more time was focused on the reason for Tomie’s evil plot and her ability to rejuvenate instead of attempts at luring the viewer into feeling sympathy for her through lame scenes with campy music. The scaredy-cat ninja boys attempting bravery only to run and scream in fright like bitches and Kenichi being a leech type idiot that a girl can’t seem to get rid of even if she douses him with a bucket of fermented panda piss, killed it for me.

Watch at your own doing. I’m sure I can find something better to do with 75 minutes of my time.