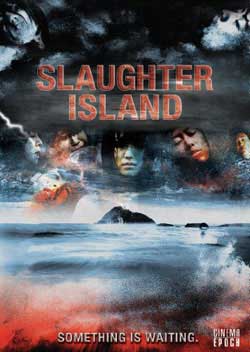 A group of ten children travel to an uninhabited island that many believe to be plagued by an ancient curse. One by one they are stalked and butchered by someone or something. As the mystery unravels, signs show that the killer may be something much more sinister. A shocking twist concludes this tale of terror.

Slaughter Island, an asian adolescent horror film makes its debut sporting an island of 10 combined guys and pretty ladies out on a excursion for relaxation and partying. There’s not much new here than a location with a curse that begins to take each one out in record order. This curse awakens a guardian of sorts which seems to be nothing more than some seaweed manifestation that takes on the appearance of recently deceased teens who the “thing” happened to kill in the process. This of course makes the budget pretty easily managed having the same actor come back with a more mundane look on their face. The blood usage and way they use it is another point of amusement with its thick syrupy ultra bight red appearance and the often “throw in from out side of the camera view” way of approaching the effects.

I did find many sections of this film humorous that I don’t think were intended that way. But then again, maybe those aspects are what makes a serious film fun to watch to the effect of laughing at low budget dialog and dorky interactions. I found their often display of drop kicking each other the most hilarious as I exclaimed…what was that all about! – and chuckled. Because of a weak script, this review may have to be shorter than usual.

I’d usually go thru the names of the characters, but why bother? All that matters is that all 10 of them get killed, maimed, and exterminated Friday the 13th style on a remote tropical island. I’m not even sure if there was ever a good reason explained than they were imposing on some sacred island. By most accounts there was a serious “suck” factor in this production that was kept subdued in favor of hot young women running around in bathing suits most of the duration.

The interaction of these folks were a bit odd even for asian actors in ways that really didn’t make alot of sense. I find it humorous when folks get killed and the notion starts to become more of a “gosh, that sucks” notion than a dramatic affect than seeing ones friend dead might create.

The movie ran a pretty close 60 minutes which is a bit short but in this case just about right. I say that because the plot goes no-where. A simple notion as to why they are they, a simple killer entity explanation and a pretty much paint by number body count countdown rounds off this visit. It boasts that it features a shocking twist, but I guess I missed it in between trying to stay awake and hoping they’d spend more time filming the lovely ladies. This movie is indeed an Asian release with subtitles included but is light on the extreme horror aspect.

Many of the kills are aftermath shots …..bodies in tree, blood on tents, bodies laying in 2….that sort of stuff. So what is really missing here is some more worthy on-screen dynamics. This and several other things mentioned really put this as a extreme low budget production with not alot to offer. If your like me, you’ll find yourself rewinding to those leap kick scenes which make me laugh everytime. Also …again what is the monster of the film? Was that just someone lifting up seaweed off camera….. amusing for all the wrong reasons and a nice array of female eye candy.