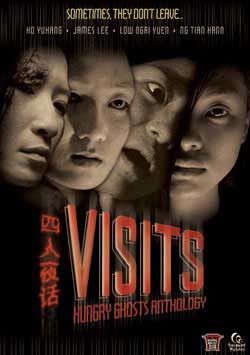 4 Stories from beyond. New Asian thriller “Visits” is a 4 story anthology dealing with issues of the afterlife. While mild in comparison of many vengeful ghost stories on the market, it still carries through with 4 strong thrillers that each bring a different take to the table. Our first story called 1413 begins as 2 young girls are found in what appears to be a suicide pack, Mae Ling and Jia. Mae Ling by some miracle survives but with a case of amnesia. Her struggle to regain her memory starts to unveil facts about what appended and how it occurred. Juin, a concerned acquaintance seems determined to help Mae Ling remember. What transpires is a piecing together of the past as the real story begins to materialize. All along Mae ling tries to cope with the fact that Jia’s spirits is still hanging around to see the facts come to light.

Our second story involves the relationship of 2 close friends and an unfortunate accident. Death lingers to resolve the questions left behind. Our 2 subjects are Anne and Sam. Sam is in a dead end relationship that promises nothing in the end with a married man who can’t commit. Anne has here own issues. The friendship of Anne and Sam seem to hold stronger than Sam ‘s current relationship so a bond that lasts into the beyond becomes a signal of better things. More into the style of a mystery “Waiting for Them” as its called, is subtle but effective.

Nodding Scoop” A rather odd title for short delves into playing with arenas that shouldn’t be tested. Our main character is driven to film a tv show of sorts. As he enlists 2 young girls they play a dangerous game with an odd looking prop that seems to function much like how an Ouiga board would. Questions are asked, filmed and the prop responds with nods. This is all fine though a restless spirit stirs in the background that pops in here and there in with misdirection and classic eerie Asian style. The ending didn’t really gel with me though it still provides a nice set of chills.

Our 4th story called “Anybody Home” is primarily shot with the mounted video cameras around an apartment complex. The security guard of the building seems to have a fascination obsession with one of his tenants and takes it further by placing video cameras throughout her room. In voyeuristic style, we get the story as it moves from room to room. Though the tension mounts as the security guard oversteps his bounds and pays the price. A pretty unique way to tell a indirect story of violence and retribution.

All stories are umbrella-ed under a radio announcer who cites each story in his radio show as a silent narrator. Though even the narrator is prone to the content he dishes out as we will see.

Directed by 4 different directors provides a nice variety each with its own style. Camera shots are well placed and help emphasize the tension with cuts from multi angles to POV perspectives. Nodding Scoop seems to be the strongest in the eerie category while the other shorts emphasize on telling a perspective on different afterlife scenarios.

Visits is a pretty decent film that reminds me of campfire stories one would tell over a dark night to eager listeners. Bone house Asia proves it can shell out a well written anthology and give us some moments to shift in our seats a bit. I think this one is a strong contender for clever ghost stories that dish it out lighter than using extremes.