Tell us about “A Valley of Ditches” and how the idea came about for you to write and direct the film?

Chris: So it is my third feature but it the first in the Horror genre before it was more uplifting dramas.

Amanda for you writing “A Valley of Ditches,” what challenges did you face? You also star in the film.

Amanda: Chris already knows what I am going to say. I love to write stories. I never really dabble with screenplays. Chris gave me an outline and he wrote the initial draft. My problem was writing things in the story that were great but if you try to put them on screen, it would cost a million dollars. It was absolutely impossible to do.

Chris: When we write together, we discovered that I am more plot driven and Amanda is more story and emotional driven. It works out really well together. She sort of adds the meat and heart to the bones that I put on the plate.

There is an amazing cast for “A Valley of Ditches,” including Amanda. What was it like working with everyone?

Chris: The cast was great. I’ve worked with Amanda before on my second feature. With her I know what I’m getting. We trust each other a lot. With Russell Bradley and Jeremy Sless the two male leads. I have not worked with them before. They were fantastic.

Amanda was it difficult for you to look at the character as just a role because you helped write the film?

Chris, what do you want the audience to take away after seeing “A Valley of Ditches?”

Chris: For me I didn’t set out to make a horror movie that terrifies people. For me it’s all about the story. Keep it very real and show that this experience can really change someone, it can really damage someone.

Amanda what would you like the fans to take away after seeing “A Valley of Ditches?”

Chris: Sometimes there is not a happy ending.

Did you have any fun, crazy moments on set?

Chris: The whole shoot for me was cool. This is by far the best shoot I’ve ever had. It went so smooth and we only shot for ten days. We all grew together and it was just like a family.

Amanda: The last night of shooting it was very apparent that we had all become such good friends. 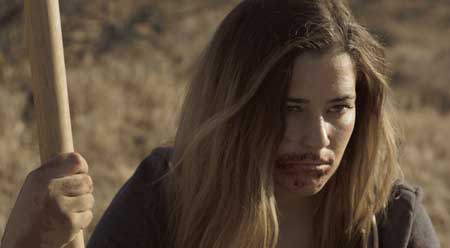