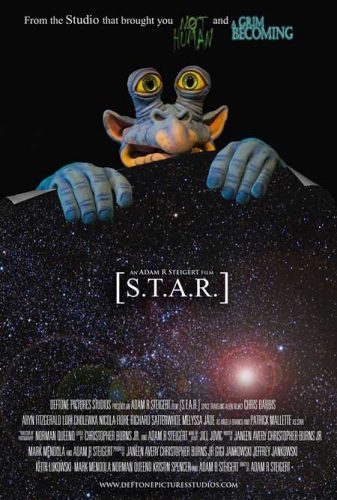 S.T.A.R [Space Traveling Alien Reject]) revolves around the once famous, award-winning writer Greg Vincent who is now a down on his luck, struggling alcoholic. Looking for inspiration for what he hopes will be his big comeback story, Greg ventures to the small town of Metsburgh. Along with revitalizing his career, he hopes that he can sell the story to get some much needed cash to pay off his debts to crime lord Angela Branco. Enter STAR, an on-the-run alien fleeing certain death from the hideous Meroarks on his home planet of Mars. Greg encounters this blue, oddly shaped, wise-guy alien after they find themselves hiding in the same cabin. With a deadline given by the mob and an alien race hot on STAR’s trail, who will be able to save them? Will it be Alex Creed? The star of such grindhouse films as Devon Danger vs. the Atomic Space Zombies. Or maybe Marissa? A diehard fan of those very films. Could this be the basis for the perfect story which could jump start not only Greg’s career but also his life?

DefTone Pictures Studios has pushed its release date back for S.T.A.R. [Space Traveling Alien Reject] but is aiming for a 2017 DVD/VOD release; however plan to start screening the title in various theaters within the next few months. Currently the release date for these screenings along with the theater locations has not been announced.  Steigert helms the project as writer/director and reunites with Not Human star Richard Satterwhite as Alex Creed and A Grim Becoming co-star Aryn Fitzgerald as Marissa. The film also stars newcomer Christopher Barbis in the title role of Greg Vincent, Lori Cholewka (Lana), scream queen Nicola Fiore (Sarah), supermodel Melyssa Jade (Angela Branco), and Patrick Mallette S.T.A.R.