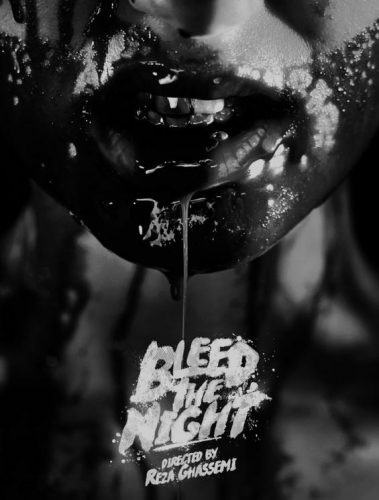 After being kidnapped, Audrey awakens and discovers her terrifying post-apocalyptic reality.

Another short film. kiddies! Today we have BLEED THE NIGHT from Cinesia Pictures, directed by Reza Ghassemi.

It’s a little difficult to describe the story, as the events appear to be non-linear. That isn’t a bad thing. We see some flashback stuff concerning a possible drug deal gone wrong and a home invasion.

The meat of the tale concerns a young girl (Nicole Zyana) who wakes up in the trunk of a car half undressed and very confused. When she exits the car boot, she falls in a pretty nasty puddle of blood and viscera on the floor, which can only mean this is not going to get any better.

And it doesn’t. She finds clothes, finds weapons, arms herself and heads out into the night. We find that the car she was hiding in is actually in the garage of an isolated gas station. And in the parking lot of said gas station….

Yes, zombies. God, I love zombies. These guys are pretty gruesome and pretty fast. The girl does her best to get past them but alas, she gets overrun.

Then wakes up in the trunk again. And we start all over.

This happens a few times, although I’m not sure why. Maybe it’s all just a dream. Maybe she’s a character in a video game, and the player is resetting the same level. I never figured it out. But we see her try this again and again, getting more clever and more brutal with each attempt. It’s pretty cool, actually.

This thing looks great, sounds great, I really enjoyed it even if I didn’t exactly get it.

Using my special short scale of one to five, five being awesome, I’m giving this film 4 zombies.