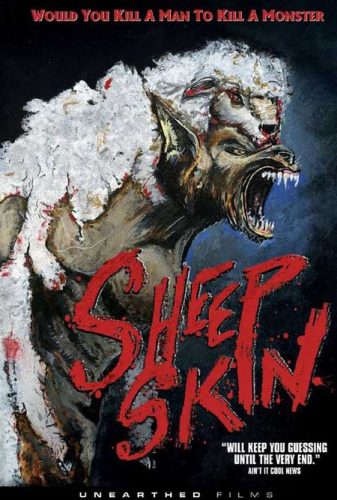 A group of punk rockers kidnap a business man because they believe he is a werewolf.

Okay, now that we’re pretty much done with vampires, and zombies have over-stayed their welcome, I say bring on the werewolves. Over the past few years, we’ve already had a bit of a resurgence, haven’t we? Not only have our lycanthrope friends been making more frequent appearances of late, but they’re coming back in new and original ways. We’ve got movies like Wer and WolfCop and Late Phases, and novels like Devil’s Row, Wolf Land, and Mongrels all breathing new life into the werewolf subgenre, and even Teen Wolf has been rebooted as a successful TV series on MTV. Now Unearthed Films has delivered another fresh new take on the timeless legend: Kurtis Spieler’s Sheep Skin.

Sheep Skin is a very different kind of werewolf tale, as well as a very different kind of release for Unearthed Films in that it is not as gory and brutal as you might expect from the folks that brought you the continuation of the Guinea Pig franchise. However, don’t take that as a criticism of the film – what it lacks in blood and gore, it more than makes up for in tension and creativity. This film kind of asks the equivalent of the question, “if you could go back in time and kill Hitler when he was a baby, would you?” Except here, of course, it’s more like “if you could kill a suspected werewolf while they’re still in human form and oblivious to the fact that they are a blood-thirsty monster, would you?”

Todd (Laurence Mullaney) is a married and somewhat sleazy business man – we see this right away, when he’s blatantly flirting with a new office assistant mere moments after hanging up a call with his wife. Karma comes right away for this guy, as he is kidnapped by three people in pig masks on his way out of the office and brought to a warehouse. He is bound to a chair and held while his kidnappers – Dylan (Ria Burns-Wilder), Clive (Zach Gillette), Schafer (Michael Schantz), and eventually Marcus (Bryan Manley Davis) – explain to him why they have done what they have done. You see, it turns out Todd was cheating on his wife with, among others, Schafer’s sister, a girl who has since turned up dead. Not only do they suspect Todd of killing her, but they believe, with varying degrees of confidence, that he did it as a werewolf. So it’s not a coincidence that they have abducted him on the night of the full moon, the classic time when humans shape-shift into their more monstrous forms.

A good portion of this movie utilizes the building tension like a roller coaster, slowly bringing us to the peak of the story before unleashing the action on the way downhill. Is Todd really a werewolf? What will the group do if he is? Are all the details they’ve learned about werewolves throughout the years from movies and books accurate, i.e. silver bullets, full moon, etc? And most importantly, what if they’re wrong? It’s questions like these, as well as some unexpected drama that rears its head now and again, that really drive the story forward, leaving all possible finale scenarios very much on the table up until the very end.

Sheep Skin is a low budget horror movie with a very punk DIY ethic to it. It began as a short film back in 2007, of which only Laurence Mullaney/Todd returned to reprise his role. It’s also writer/director Spieler’s first feature film, originally finished up in 2013 but not released and distributed until 2016. Sure, some of the acting is a bit rough around the edges, but for the most part this is a fantastic find of a film. I am very impressed with the writing here; it’s so nice to find a unique and compelling story in a familiar old costume. Yet again, Unearthed Films has hit one out of the ballpark, finding a true gem of a low budget film and bringing it to the hungry masses. I excitedly recommend this one to any fans of werewolf movies, independent films, or just good old school punk rock horror movies.