CHECK OUT JAY & BRIAN’S EXCELLENT VIDEO STORE.  For those in the PA area, they have one of the most extensive Horror sections. They also attend Monster Mania and other conventions. So if you are in the PA area looking for that perfect DVD or Blu-ray, check out the shop!

First off, tell us how us how Jay & Brian’s Excellent Video Store started out?

– Brian and I both met working on a film production. This was right around the time that the big chain rental store’s were fading out. For me personally the video store was always an integral part of my life. I was still very young but I vividly remember when the first rental store’s started popping up. There was this little camera shop in San Jose, California called Photo Drive-Up where I grew up that had a small video rental section. Walking into that store and seeing all of the VHS box art faced out on the racks for the first time is something had always stuck with me. This was a common topic of discussion between Brian and I before, during, and after production days. One day after production we ended up at Brian’s to catch a flick. The first thing he did was show me his film collection which had been just as numerous and impressive as my own. I had an empty store front in my house and I joked that we should pool our movie collections together and open up a video store. I ended up getting laid off at my day job and had a lot of free time so I put that time to use and started making that joke a reality. We picked up some racks and product from liquidating chain stores. Split our collections between rentals and sales then advertised our grand opening by handing out fliers with candy during trick ‘r treat night in town. We opened on October 31st. 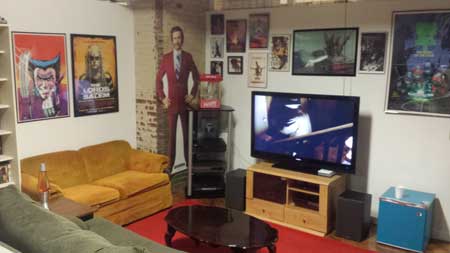 Do you feel that DVD’s and Blu-Ray’s will ever be completely obsolete?

– I don’t. I believe that select production houses/distributors will continue to release their films on DVD & Blu-Ray while others only go the way of digital and streaming. I believe that these hard copies will be manufactured in limited quantities. This in turn will make home video a more collectible entity. There will always be that audience to cater too. I think over time the demand will return and the time away from mass production will increase the used market. Home video essentially will go the way of vinyl.

– Creatively I’m inspired by Rob Zombie. The relationship he creates between music, film, and comic books. How he uses all of those things that inspire him creatively. It’s unique. Almost a genre in itself. I love that. It’s something that really resonates with me on a personal and artistic level. Clive Barker. He’s not just a master of the horror genre but a master of horror media as a whole. Film; Art; Writing; Plays. There’s nothing like Barker’s work. He has a signature and you can tell it’s of design. As a business professional I’ve been privileged enough to have friends in my life that are not only that but some of the most inspiring people to me. Brandon Wunder at The Alternative Gallery. Poster artists Chris Garofalo and Cody Ryan Brown. These guys are not only talented creative forces but humble people that are driven in their pursuits of their passions as a business. 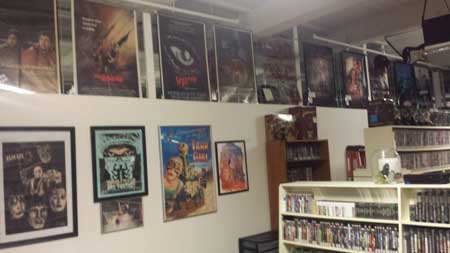 Why did you decide to move the store from it’s Catasauqua location to The Alternative Gallery?

– In a word. Necessity. We belong here. We’ve had trouble reaching our audience in the past but our audience is already here. This is where people go for the alternative. Unique forms of expression and entertainment. Film is not only art in it’s most plentiful form but the way of home video since digital and streaming has become the alternative. This place feels like home. These guys are our family and they treat everyone who comes through the front door as such. There’s a camaraderie here that I’ve never experienced anywhere else. You are welcome to be you and that’s exactly what the video store is. Me. It’s a very liberating environment. We’ve also had the opportunity to freshen up the business plan. Most people that are still interested in home video are collector’s. They want to own it. So we’ve done away with the rental aspect and increased our sales selection. Without the maintenance of a rental business we’ve also had the opportunity to have more time to pursue our other creative interests. We are generally only open to the public on the weekend so we have that other time for ourselves. I still find myself there all of the time though because this place addictive. It’s a much more casual setting. We even have a full living room set up in the store and encourage people to come hang out, watch movies, and play video games. 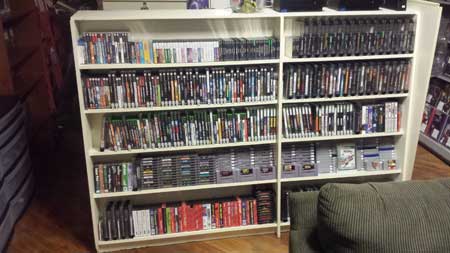 You have a great appreciation for Horror. What started the love of Horror?

– A Nightmare On Elm Street part 3: The Dream Warriors. I was about 5 or 6 years old when in came out on home video. I vividly remember waking up and entering my living room where my mom was folding laundry in front of the tv. She was watching The Dream Warriors. The scene that was on the screen was the one of Patricia Arquette stuck to the gore on the ground, kind of running in place, in Freddy’s boiler room. I was mortified. I hid behind my dad’s stereo cabinet. My mom asked if I wanted her to turn it off. I said “no” and continued to curiously peek at the screen very so often. At some point she decided to turn it off anyway, poured me a bowl of cereal and asked me what I wanted to watch. I asked her to put The Dream Warriors back. I ate my cereal, slowly, eyes glued to the screen/jaw on my lap. Then I watched it again and again. I was hooked. This was not only my first experience with horror but my first movie memory. I used to draw Freddy Krueger. I even had my mom trace my outline on a giant sheet of paper and then I colored it in with full detail to look like Freddy. This film ignited my imagination and sparked my creativity. After that I only wanted to watch the movies at the video store that had the most twisted and graphic looking covers. Horror continued to be my muse. 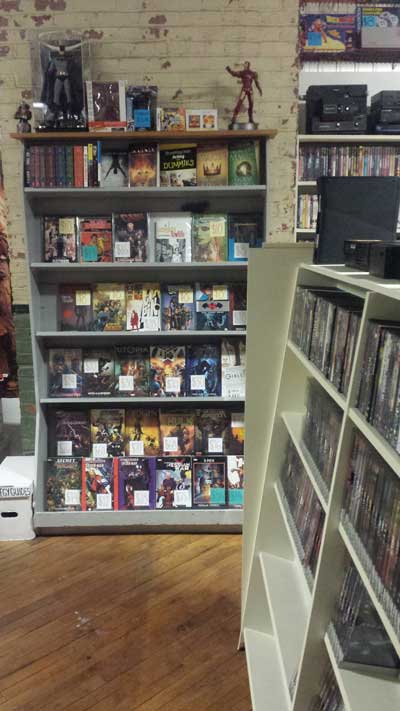 How do you feel the Lehigh Valley has improved regarding art and entertainment?

– It has improved greatly. Especially over the last few years. When I was a kid we had nothing more than an AV Club. Art class was art class. Music class was music class. There were no big stage productions. That was it. You didn’t have very many options for outlets to grow creatively. Now you have places like The Alternative Gallery and The Artsquest that have everything under one roof. It will only continue to flourish.

What are some of your favorite Horror films? (Past & Current)

– As previously stated generally anything by Rob Zombie and Clive Barker and The A Nightmare On Elm Street franchise. I’ve always had a connection with horror films where the central character fancies himself a monster of some kind. Someone’s who’s misunderstood, an outcast. Like Boone in Nightbreed or Michael in The Lost Boys. Tom Holland’s Fright Night was always one of my favorite contemporary vampire films. I had the score for it on cassette when I was a kid and I used to listen to it while I was trying to fall asleep. The classic slasher’s of course but one of my favorite’s is The Burning which I didn’t discover until a couple years ago. Tarantino and Rodriguez’s From Dusk Till Dawn and Grindhouse. I think those two compliment each other creatively and I would love to see them do something together again. I always look forward to Darren Lynn Bousman’s work. He’s been a great addition to the genre with innovating work like Repo: The Genetic Opera and The Devil’s Carnival. The Soska Sisters’ American Mary. I can’t wait to see what they do next. I’ve always been a big fan of horror anthologies like Creepshow, more recently Trick ‘R Treat and the V/H/S trilogy. I could go on. There is so much to look forward to even in the way of films that I haven’t seen yet. Horror is so rich with it’s era’s and sub-genre’s. You really never have to be bored with film as a horror fan. 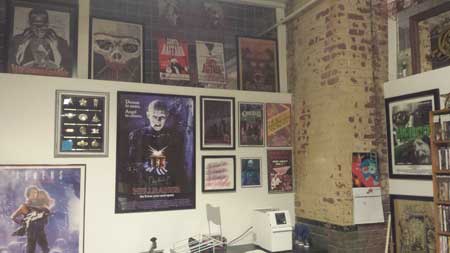 What advice would you offer to fellow business owners who may be unsure of starting a business?

What has been the most interesting film find or request you’ve added to the store?

– Dealing with genre fans I don’t think there has been much in the way of requests that has shocked me. We’ve rented and sold stuff like A Serbian Film, Slaughtered Vomit Dolls, the Guinea Pig films, the rated “X” version of Thriller, Lars Von Trier’s Antichrist and Nymphomaniac. I’ve had customers come in looking to watch all of the grindhouse era Nazisploitaton films like Ilsa, She Wolf of the SS and Love Camp 7 but we cater to that. We’ve had titles available for rent in the past that were going for anywhere between $90 and $200 used online like Fright Night part II, Evil Ed, Drop Dead Fred, and The Cook, His Wife, The Thief, Her Lover. But you could rent them for a dollar! Rare and interesting is what we do. 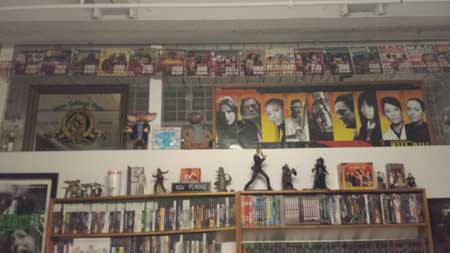 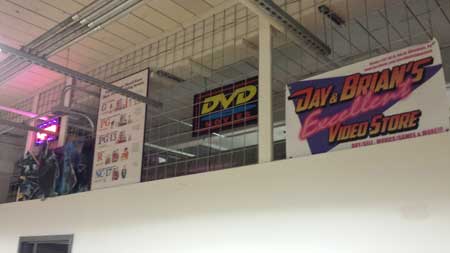 Why do you feel The Alternative Gallery is so important for the Lehigh Valley?
– Because it doesn’t give up. It’s ever growing and ever changing. There is always something new, unique, and exciting right around the corner. No limits. The arts need that kind of freedom not just here but everywhere.