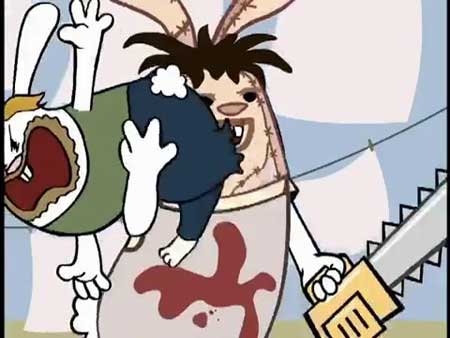 The chainsaw-wielding Leatherface and his psychotic clan as you’ve never seen them before. The Texas Chainsaw Massacre, retold in 30 seconds by the bunny troop.

More short films! Today we have another selection from the “30 Second Theater” series by Angry Alien Productions. This time it’s TEXAS CHAINSAW MASSACRE IN 30 SECONDS (AND PERFORMED BY BUNNIES).

As I mentioned in my review of another short from this series, Angry Alien Productions is a company founded by Jennifer Shiman. These FLASH animation-style shorts started in 2004 as part of a webseries which has won Webby Awards as well a 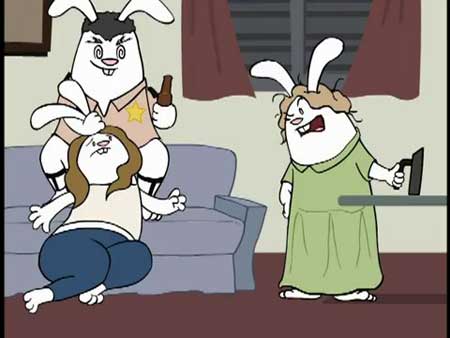 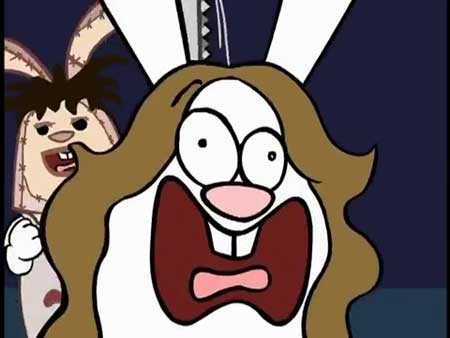 s gone on to be featured on Starz and FEARnet.

The series features short animated films that re-enact major motion pictures using animated bunny rabbits. Ms. Shiman provides many of the voices, along with the occasional guest star. The horror shorts are part of the FEARnet collection, but the series has done “Bun-o-Vision” versions of many genres.

I LOVE these things. I’ve followed the series on-line for years. They’re cute, sometimes a little disturbing, and just quick silly fun. Some of the parodies are stronger than others, of course. But there’s just something about a cute little bunny playing Leatherface that makes me happy.

If you’ve never experienced these shorts before, I highly recommend visting the official website (www.angryalien.com) and have some fun. Also, portions of the series have been collected for a DVD release.

So using my special short scale of one to five, five being awesome, I’m giving this film 4 carrots.