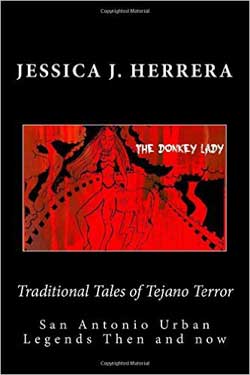 Having lived in San Antonio for some time I have become intrigued by the haunted history behind the Alamo City. It was not until I began talking to an author who is from here in San Antonio, who wrote a book on stories of horror and mayhem. There are a lot of tales that are out there of spirits, spirits of children haunting a rail road track. If you park a car on the tracks, you could feel something pushing it off. A test was done where flour was placed on the back of a vehicle and when something was pushing the car off the tracks, small handprints were discovered.

The author I have had the privilege of talking to and reading her anthology is Jessica J. Herrera. The anthology she wrote is called Traditional Tales of Tejano Terror. The stories contained are worth a read and to those who cannot stomach horror, well, they will have trouble sleeping at night. The first chapter is called Midget Mansion, the title alone would intrigue the reader and find themselves drawn into a story of murder and mystery.

Foundation of Evil is another tale of horror that finds the reader faced with a man with a haunted past, one that includes many lives taken. The rest of the stories are sure to bring certain truths of how haunted San Antonio really is, to the surface. The way the tales are written has us care for the characters while fearing for what they are about to be thrown into. One could only imagine what else she is capable of doing if she is able to write a feature length novel. Would one even dare to imagine the stories she is capable of coming up with. I would be interested and I am sure readers of this often criticized genre would be too.

The ability to scare people with short stories that often have ourselves questioning ones motives has been the subject of everyone’s curiosity. To tap into the haunted history of San Antonio is sometimes difficult. With all the ghost tours that are available, some good and others plain terrible, Jessica has the ability to bring the mystery of the haunted locations out and allow man to have a taste of what horrific evils lurk within the shadows of the Alamo City. If you have read the stories, one would understand the evil that lies waiting around the corner. If you have a taste for the unknown and the darkness that it contains, then Traditional Tales of Tejano Terror is the book for you, just read with the lights on and lock every door and window to your house.